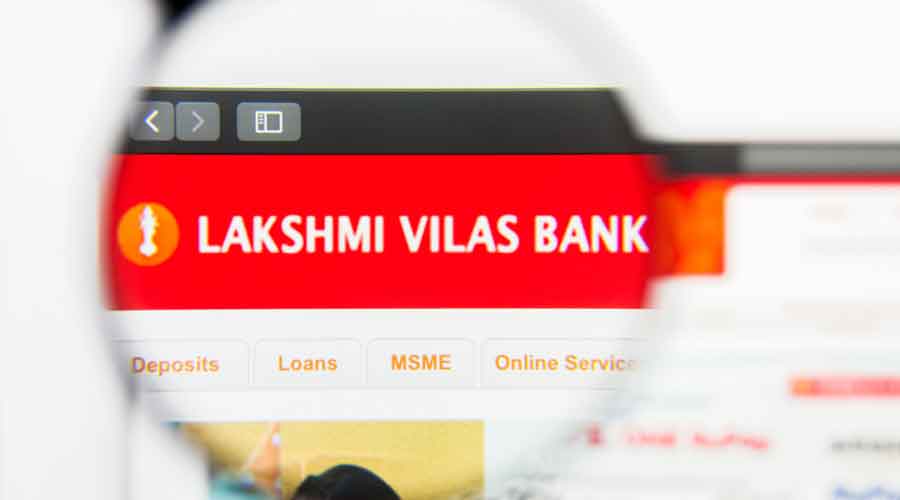 Shares or debentures of LVB listed in any bourse will be delisted without any further action from the transferor bank, DBIL or order from any authority, the RBI said.
Shutterstock
Our Special Correspondent   |   Mumbai   |   Published 19.11.20, 01:06 AM

The shareholders of Lakshmi Vilas Bank (LVB) will get nothing from the proposed merger with DBS Bank India Limited — a disagreeable prospect they woke up to a day after the details of the amalgamation scheme of the two banks were revealed, sending the LVB stock plummeting 20 per cent on the bourses on Wednesday.

The stock sank to Rs 3.10 from Rs 12.40 as it hit the lower circuit filter when it emerged that the RBI in its draft scheme of amalgamation had shown the value of the shares held by the equity holders of the private sector bank to be zero.

In the amalgamation scheme, the RBI said that from the “appointed date”, the entire amount of the paid-up share capital and reserves and surplus including the balances in the share or securities premium account of the transferor bank (LVB) will be written off.

Shares or debentures of LVB listed in any bourse will be delisted without any further action from the transferor bank, DBIL or order from any authority, the RBI said.

Stock exchange data showed that as of September 30, public shareholders held 93.20 per cent of the Tamil Nadu-based bank. The central bank’s proposed plan will affect 96,380 retail shareholders who hold close to 23.98 per cent of LVB.

Foreign portfolio investors (FPIs) who hold 8.65 per cent, insurance companies having 6.40 per cent and HNI investors holding 22.75 per cent will also get nothing.

Apart from these, entities such as Srei Infrastructure Finance (3.34 per cent), Indiabulls Housing Finance (4.99 per cent), Prolific Finvest having 3.36 per cent will also take a knock.
Analysts said LVB’s net worth had turned negative and shareholders would have to take the hit. Besides, depositors get precedence over the shareholders.

On Tuesday, the government had placed LVB under moratorium. During the one-month moratorium, depositors can withdraw up to Rs 25,000.

T.N. Manoharan, the RBI-appointed administrator, on Tuesday said that the bank has enough liquidity to pay back the depositors. Speaking at a virtual press conference, he said  the depositors’ money is safe and that he was confident the merger with DBS would take place before the December 16 deadline.

On the reasons behind recommending the moratorium to the Centre, the RBI said the financial position of LVB has undergone a steady decline with the bank incurring continuous losses over the last three years, eroding its net-worth.

The lender has not been able to raise adequate capital to address issues around its negative net-worth and continuing losses.

One of the shareholders, requesting anonymity, said: “The move should not be done at the cost of domestic investors, otherwise it would set a precedent that would discourage investors from investing their hard earned money in Indian banks and financial services firms.”

The shareholder said any move that hinders the principles of natural justice should be avoided.  “Hence, we would urge RBI to reconsider the proposal of writing off the paid-up share capital and reserves, which would affect both retail and institutional shareholders of the bank.”

The shareholder said the regulator should opt for a solution that is fair and protects the interest of all the stakeholders of the bank and does not discriminate one from another.

With inputs from the Calcutta Bureau