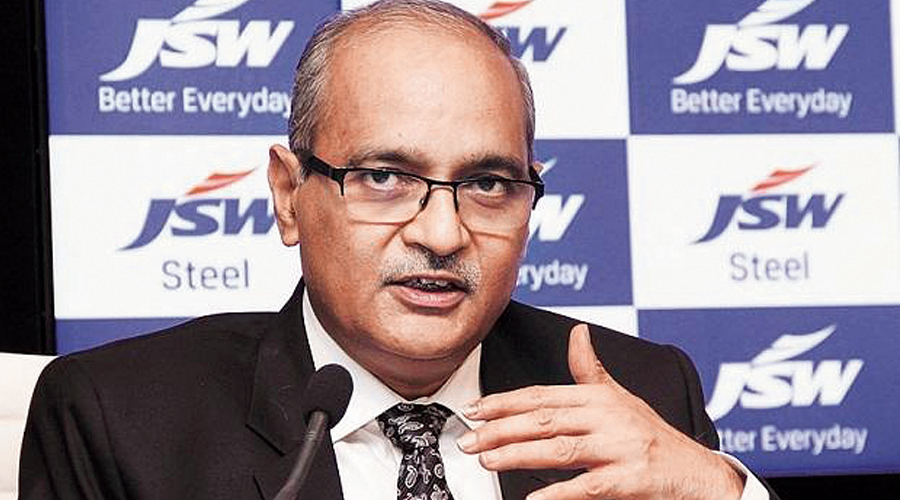 When steel companies in India and abroad are aggressively reducing debt taking advantage of the global commodity boom, JSW Steel does not want to take its eye off growth, announcing fresh investment of Rs 25,115 crore in the next three years. JSW Steel’s joint MD and CFO Seshagiri Rao tells The Telegraph that JSW will be a 38-million-tonne company by 2024 but growth with responsibility will be its mantra.

The big question before all: is the phenomenal rise in steel prices structural or speculative?

There are some fundamental changes taking place. Governments across the world are giving stimulus and spending on long overdue infrastructure build. Second, China is consuming more internally and also reducing emissions. These fundamental changes are going to leave commodity demand strong in the future.

How is the China factor playing out vis-a-vis world?

The World Steel Association said global demand in 2020 was down by only 3 million tonnes (mt) to 1,772mt compared with much more gloomy projections. Demand in India dropped only by 6mt, much better than apprehended. Chinese demand was 995mt, growing by 83mt, even as it came down by 86mt in the rest of the world. But production in China went up by just 52mt.

China absorbed the excess production from the rest of the world. It imported 24mt more in 2020 and exported 10mt less. That shortfall led to a surge in price and China led the surge.

This year China wants to keep production like last year and discourage exports. At the same time, consumption will be good given the stimulus. These measures should support the price.

What would be the impact of the second wave of Covid on steel demand in India?

India’s steel demand was 6.7mt in April against 9.7mt in March. May would be no different. But it is still better than 1mt seen in April 2020. But India will bounce back strongly and I believe overall consumption will be 110mt compared with 94mt in 2020-21.

Our priority is the local market. But whenever domestic demand is weak, we are pushing material to the export market. Half of our sales are to OEMs and retail makes up 20-25 per cent. Whenever retail is affected, we export. We are not reducing production. Export from India will rise again in April-May and also from JSW Steel.

How do you see the first quarter pan out, given that OEM contracts are likely to be done at a higher rate and that the export market is strong?

In April and May, prices in China and the US went up by 27 and 19 per cent, respectively. Benefits of that will flow in here even though it would be partly offset by iron ore price hikes in those months. Moreover, there will be benefits from the geographical change (exports). So, from the margin point of view, it would be good.

When all steel companies are looking at deleveraging, JSW is chasing growth. How do you explain the divergence?

We want to grow with financial discipline, maintaining our ratio to ensure stability even during a downturn. JSW will be a 30.5mt company by 2024, from 18mt now. A major part of it will happen in this year only (24mt). If we add, Bhushan Power & Steel (5mt), Monnet Ispat (1.2mt) and US operations (1.5 mt), the overall capacity will be 38mt. Much of it is going to be value-added steel.

There is also transformation happening downstream where EBIDTA has doubled last fiscal. The overseas ventures (US and Italy) will have a good positive EBIDTA compared with a Rs 800-crore loss last year. JSW is also investing in mining and digitising operations. They will bring huge benefits to the company.

What will be the benefit of mining capex?

We paid 100 per cent of the market price as premium in the auctions last year to acquire four mines in Odisha and deployed third parties to quickly operationalise it. The arrangements are for two years. By that time, JSW wants to build a fully automated, world-class operation.

JSW does not get any cost benefit for owning captive mines. But without them, we could not have maintained production last year. Now that availability is ensured, our priority is cost. Washing and grinding is in focus to improve quality. We realised it last year. That’s why this investment is imperative and the payback period is four years. Next year, we may look at a slurry pipeline to reduce the cost of transportation.

Where do you see JSW’s debt matrix going forward?

We were targeting 3.75 debt to EBIDTA to manage organic and inorganic growth. But with strong cash generation taking place, the target now is 2.75. We wrapped up last year at 2.61. Despite spending Rs 15,000-crore odd on acquisitions and capex, JSW reduced net debt by Rs 858 crore in FY21. Even at BPSL, where JSW has a 49 per cent stake, debt has been reduced by Rs 1,800 crore. This is despite undertaking expansion and cost optimisation projects of Rs 1,550 crore. However, these expenses will be borne by BPSL from their own cash flow.

There are three divestment candidates in the steel sector. NINL, RINL and steel plant of NMDC. Would you look at them?

We will definitely evaluate all the three, they look interesting, size-wise. For NINL, we have submitted the EoI. Further evaluation will be done after due diligence.