Demand recovered to 30% capacity in May from 10% in April: JSW CFO 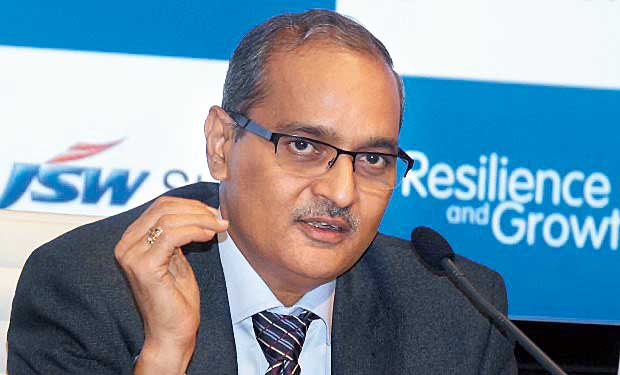 JSW Steel came out with its annual results on Friday and guided to hold sales and production in FY21 nearly at the same level as FY20. Joint managing director and group CFO Seshagiri Rao talked about what gives him confidence despite a virus outbreak, the export market, the credit squeeze in India and demand revival. Sambit Saha of The Telegraph reports.

How did JSW navigate during lockdown?

We took a call on March 25 to curtail production anticipating the disruption. By April 20, when we restarted, JSW operated at 38 per cent capacity. Going by the joint plant committee (JPC) figure, the demand destruction in April was 91 per cent.

On the supply side, it has fallen by 69 per cent. But only six players contributed 94 per cent of the supply, which is higher than 65 per cent which steel majors usually do.

This means that pain is very deep in the medium and small sectors, who used to produce the 35 per cent. In May, JSW ramped up to 85 per cent. Demand recovered to 30 per cent in May from 10 per cent in April. But it will take a long time to return to normal.

You guided to maintain strong production and sales numbers for FY21. How will you achieve it?

During the first four months, world steel production fell 4 per cent, or 27 million tonnes (mt). But except China, the fall is 10 per cent, which is 29mt. This indicates China has not suffered as much as the rest.

The importing countries, the neighbours of India, import around 8.3mt. Then there is Indonesia and Malaysia and the West Asian countries. They together import 30-35mt steel. China, Japan, Russia, Korea exported around 40mt in the first four months of 2019.

Indian export in the same period went up 1.2mt. So there is space for the Indian players. But these exporting countries will come back to production by 6 months when Indian demand will also pick up.

But is it profitable to export?

Globally prices have fallen by 15 per cent. But the rupee has depreciated by 9 per cent. So, there is an impact of 6 per cent. The net sales realisation is lower than the domestic market by 6 per cent.

China produced 85mt in April, its production is up 4mt. This had an impact on steel prices as it went up by $25 a tonne last week. Chinese prices are the index for the world. As a result, iron ore prices went up to $100 a tonne from $80 a tonne.

So, the chances of global steel prices coming down are less because of the cost push.

But China does not buy coking coal and in the rest of the world, there is a production cut. As a result, prices have slumped from $160-115 a tonne, which is good for India because we mostly import. But in India, iron ore prices are coming down because there is less demand. So, the cost side is controlled. Export is okay till India recovers.

Do you think the fiscal and liquidity measures are good enough to recover?

The policy measures by the government and the RBI are good but they have to translate into action on the ground, it should go to the industry where it is intended.

The pain is in the MSME sector. So the Rs 3 lakh crore government guaranteed credit is a great step the government has taken.

This is also again a credit squeeze. So, investors are moving money from mutual funds, who used to invest in commercial papers and other instruments to FD. That money is gone.

Plus, government borrowing has gone up from March 31 to May 8 by Rs 6,72,00 crore. Out of that, the bank has lent Rs 3,48,000 crore, an 8.9 per cent growth. So, credit is coming down, deposit going up, the money is actually going to the government. So, when there are steps being taken to enhance liquidity, this is what is happening on the ground.

I hope the money borrowed by the government comes back to the system, it will be positive for the economy.

How do you ensure credit flows?

One side of the story is enhanced credit risk. But why are the bankers so averse? It may be because of what many bank officers have gone through in the last two years. There has to be a clear protection to the officers to take business calls without any fear. It is essential to start the credit flow. Whenever India grew, credit growth used to be 2-3 times of that. If credit growth is negative, and one expects India to grow, that will not happen. JSW with a diversified source can manage. But what about smaller firms? That is the big question before us.