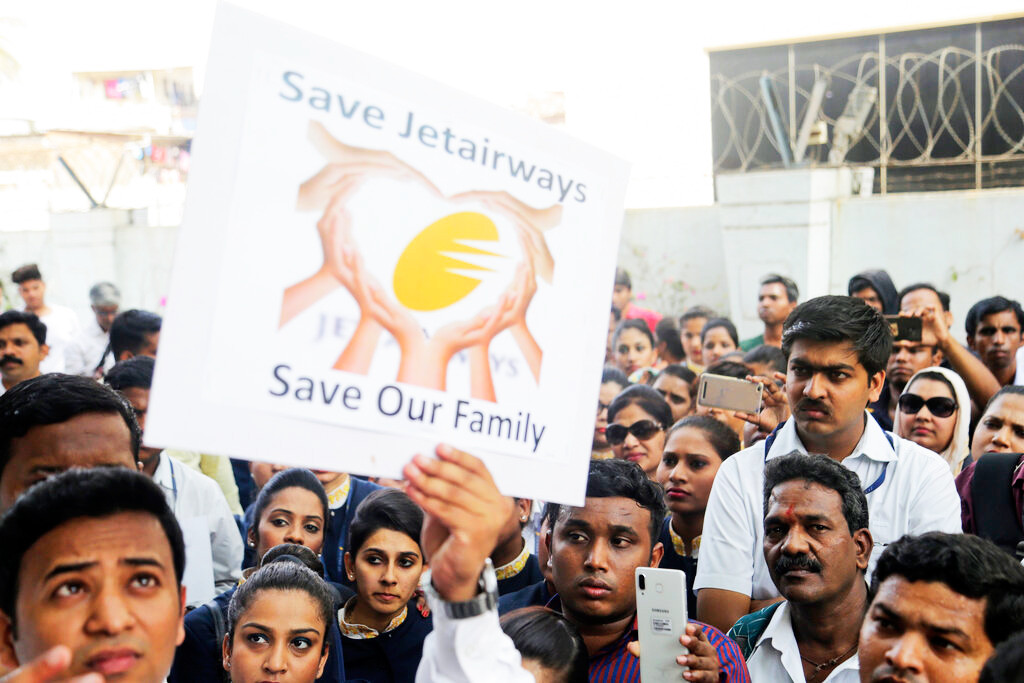 The crisis in Jet Airways deepened on Friday as the airline could operate only 11 aircraft, leaving passengers stranded at various domestic and international airports and prompting the Prime Minister’s Office (PMO) to hold an urgent meeting to discuss the situation.

Meanwhile, the deadline for submitting expressions of interest (EoIs) for the

acquisition of a majority stake in Jet Airways ended on Friday. Sources said Jet founder Naresh Goyal had put in bids for buying the ailing airline. It couldn’t be immediately ascertained whether he has partnered any entity or airline for the bid.

Earlier in the day, the PMO meeting was called after civil aviation minister Suresh Prabhu asked the secretary of the department, Pradeep Singh Kharola, to review the issues concerning Jet Airways.

After participating in the meeting at the PMO, Kharola held a meeting — through video conference — with the management of Jet Airways.

Passengers were left stranded at airports as Jet announced on Friday that it was suspending international operations till Monday. Moreover, its employees carried out a protest march in Mumbai, asking the airline to pay their pending salaries.

Kharola told reporters that Jet Airways flew 11 aircraft on Friday and will fly six to seven aircraft on both days this weekend on domestic routes.

When asked if the airline has enough funds to keep the operations going on till Monday, the secretary replied in the affirmative.

He said that Jet Airways had a meeting with the bankers on Friday “wherein they put forth their demand” regarding interim funding.

A consortium of lenders — led by the SBI — is currently handling the airline. Kharola said that the bankers have asked the airline to rework its proposal for interim funding.

“They (Jet Airways) will be approaching the bank again on Monday. Depending on what the banks decide, the future course of action will be taken,” he said.

He said six to seven planes would fly till Monday afternoon. After that, the number of planes in operation will depend on the outcome of the interaction with bankers.

The secretary clarified that while one aircraft that would fly during the weekend would be a Boeing 737, the others would be ATRs. With less than 100 seats, an ATR is much smaller than a Boeing 737 which seats 180 passengers.

More than 5 per cent stake of the airline has been pledged with SBICap Trustee Company.

Naresh Goyal owns 50.1 per cent in the airline, most of which is pledged with the consortium of lenders.

Five players are reported to be in the fray for the airline, including Goyal and Etihad. The buzz was that Air Canada and Delta Airlines have also put in their bids, though this could not be confirmed.