In the first of such meetings by the finance minister, the business leaders proposed bringing down government stake in banks to below 50 per cent 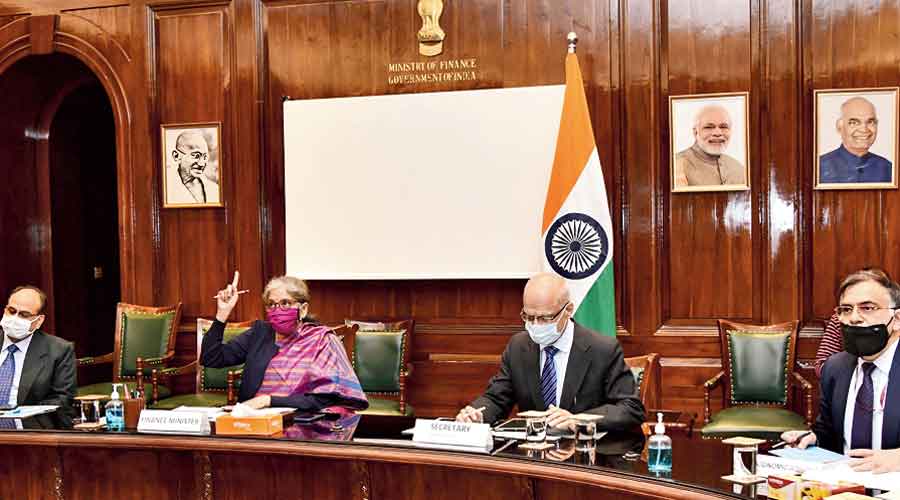 Nirmala Sitharaman during a pre-budget consultation with industrialists at North Block on Monday.
PTI
Our Special Correspondent   |   New Delhi   |   Published 15.12.20, 03:30 AM

India Inc has pitched for fiscal consolidation over a three-year period in their pre-budget meeting with finance minister Nirmala Sitharaman.

In the first of such meetings by the finance minister, the business leaders proposed bringing down government stake in banks to below 50 per cent, strategic sale of PSUs along with fiscal stimulus to revive an economy laid low by the coronavirus.

“The government has an unenviable task of ensuring a fine balance between supporting economic recovery and growth on one hand and ensuring macro-economic stability on the other. The CII’s suggestions take this aspect into cognisance,” Uday Kotak, president of CII, said.

He said government expenditure should be prioritised in three areas — infrastructure, healthcare, and sustainability. The budget proposals should also address the two critical areas of boosting private investments and providing support for employment generation, Kotak added.

“A scheme like MGNREGA for the urban poor may be considered – this may include sanitation work, plantation of trees and the maintenance of public places.”

Interest subvention on housing loans of 3-4 per cent for a period of 3 to 4 years will have a multiplier effect on the economy, he said.