Government to monetise Rs 6 lakh crore worth of central assets 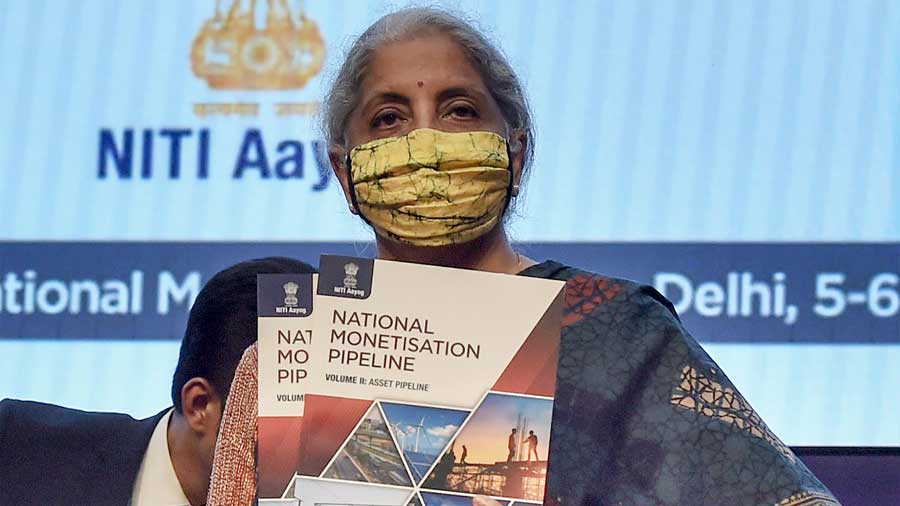 The Centre plans to monetise Rs 6 lakh crore (trillion) worth of central assets over the next four years under a plan announced earlier in the 2021-22 budget to boost infrastructure spending and spur economic growth in Asia’s third-biggest economy.

A cornucopia of government assets have been lined up for monetisation — from gas pipelines, roads and warehousing facilities to airports, railway stations, railway colonies, passenger trains and even stadiums.

A Niti Aayog document on the roadmap for the National Monetisation Plan (NMP) said successful bidders for the assets would either pay upfront or invest over a longer period of time. The Centre plans to use the funds collected from the exercise for further public investments.

“The strategic objective of the programme is to unlock the value of investments in brownfield public sector assets by tapping institutional and long-term patient capital which can thereafter be leveraged for further public investments,” Niti Aayog chief executive Amitabh Kant said.

The top five infrastructure sectors  estimated by the government for their potential for monetisation are roads, railways, power, oil and gas pipelines, and telecommunication.

Under the plan, private companies can invest in projects for a fixed return using the InvIT route as well as operate and develop the assets for a certain period before transferring it back to the government agency. Some assets such as warehouses and stadiums can also be given on a long-term lease for operations.

Finance minister Nirmala Sitharaman said the programme would give an impetus to economic growth.

“So, by bringing in private participation into this, you are going to be able to monetise it better, and with whatever resources you obtain through the monetisation, you will be able to put in further investment into infrastructure,” she said.

“Let there not be any confusion. The government is not selling away. These are brownfield assets which will still be under government ownership. They would come back to the government after the end of the lease period,” the minister added.

Amit Kapur, joint managing partner, J. Sagar Associates, said: “What is on offer is a clutch of concession formats permitting the concessionaire to build/refurbish and operate the asset with defined risk and performance obligations, without any transfer of title. The success of the offering would depend on adopting fair risk and reward allocation, as also efficiency of the bid process followed.

Abhaya Agarwal, partner, infrastructure practice, EY India said “success of the plan could also enable recycling of funds which will be critical for revival of the infrastructure investment in India”.

He said meticulous planning, project packaging, and co-ordination will be needed to address the underlying structural and legacy issues. “It would be important for the government to get the first few projects in each sector right to set the ball rolling in the right direction.’’

Earlier this year, Prime Minister Narendra Modi’s administration announced a privatisation plan which would leave government ownership only in a few critical sectors.

The Niti Aayog study also referred to the possibility of monetising stretches of the eastern dedicated freight corridor. As much as 2,843km of the freight corridor can be monetised, though it is yet to finalise any stretch.

“The station and the adjoining real estate on the railway land may be bundled along with train operations to bring in viability and commercial attractiveness,” the Niti Aayog document said.