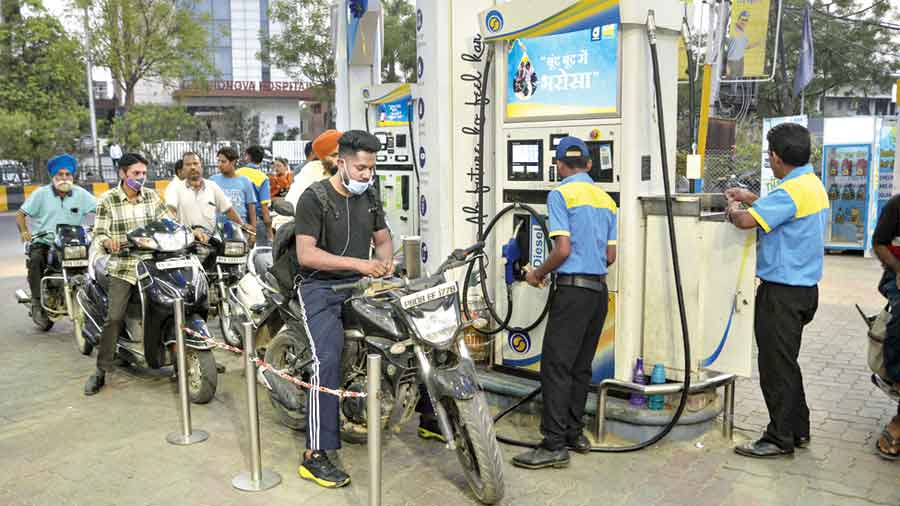 The government reduced the excise duties on petrol by Rs 8 per litre and diesel Rs 6, which it said would reduce revenues by Rs 1 lakh crore.
File Picture
Our Special Correspondent   |   Mumbai   |   Published 23.05.22, 02:27 AM

Bond yields may resume their upward journey after the Centre on Saturday slashed excise duties on petrol and diesel.

The government reduced the excise duties on petrol by Rs 8 per litre and diesel Rs 6, which it said would reduce revenues by Rs 1 lakh crore.

On Sunday, a Bloomberg report said the Centre would meet the shortfall through additional market borrowings.

Though a rise in GST and income tax collections can help the government to bridge the cap, it will be neutralised by additional spending on food and fertiliser subsidies, the report said.

The prospect of more government borrowings through the supply of bonds is deeply worrying for the markets, which saw yields rising to a three-year high of nearly 7.46 per cent after the Reserve Bank of India (RBI) raised the policy repo rate by 40 basis point earlier this month .

Yields had cooled down in recent sessions on expectations of some support coming from the RBI in the form of open market operations. The benchmark 10-year bond settled at 7.36 per cent on Friday, much higher than the yields of around 6.90 per cent on April 4.

The Centre has set gross borrowings at Rs 14.3 lakh crore in this fiscal, with 59 per cent borrowed in the first half.

But observers said the prospects of borrowing to meet the fuel revenue gap and more rate hikes from the RBI would keep bond prices under pressure and yields may again head towards the 7.50-per-cent-mark. However, there are some experts who indicate that such additional borrowing may not be necessary even after the excise duty cuts.

Icra chief economist Aditi Nayar said the revenues  would be greater than the budgeted estimates that can be used to meet the shortfall.

This was nearly 18 per cent higher than the previous highest collection of Rs 1.42 lakh crore achieved in March. On the other hand, in 2021-22, direct tax collections net of refunds shot up  49 per cent while indirect taxes showed a growth of 20 per cent.

According to Shaktikanta Das, governor, RBI, the rebound in domestic economic activity is gradually getting generalised. Minutes of the latest monetary policy committee (MPC) meeting showed him saying that improving contact-intensive services coupled to revival in urban demand is driving personal consumption.

The RBI Governor also averred that while the outlook for agriculture remains positive given the normal southwest monsoon forecast for 2022, which would support rural consumption, investment activity is gaining momentum with higher capacity utilisation and capital goods production registering an uptick. He however, cautioned that higher global commodity prices, protracted shortage of critical inputs and policy tightening by major central banks pose downside risks to domestic economic activity.