Centre unveils a host of festive bonanza for government staff 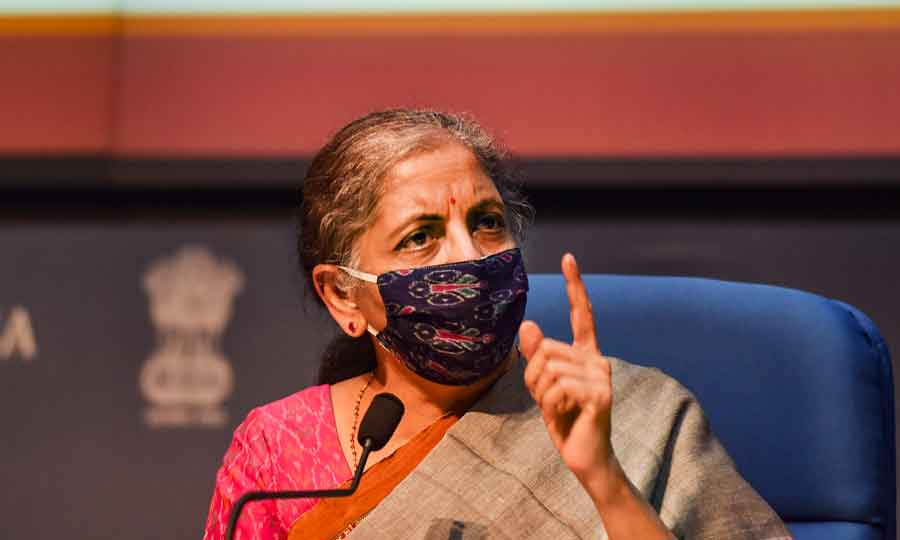 Finance minister Nirmala Sitharaman has announced another faux stimulus package that seeks to boost demand in India’s pandemic-battered economy by Rs 73,000 crore this fiscal by persuading high-saving central government employees to open up their wallets during the looming festive season.

The central government employees have been allowed to tap into their tax-exempt leave travel concession (LTC) and spend it on a range of white goods, home appliances and other consumer products that attract a goods and services tax rate of 12 per cent and higher. These allowances might have lapsed if employees — who have been loath to go on a holiday during the pandemic — did not use them.

Each employee will also be given a pre-paid Rupay card for Rs 10,000 under a special festival advance scheme — an idea being resurrected from the Sixth Pay Commission report — to ignite spending.

The interest-free loan will be recovered in 10 instalments next year, officials said. Employees will be allowed to use the card till March 31 after which it will lapse.

But like the first stimulus package announced in May, the Narendra Modi government is making very little upfront funding commitments. It will, therefore, not move the needle on its gross borrowings which, officials said, would stay pegged at Rs 12 lakh crore this year.

The government is hoping to crank up demand by Rs 36,000 crore by “incentivising” government employees to spend more. Of this, a sum of Rs 28,000 crore will come from an leave travel concession (LTC) voucher scheme and Rs 8,000 crore from a festival advance scheme.

“All these measures are likely to create an additional demand of Rs 73,000 crore),” Sitharaman told a media conference where she unveiled the new package, adding the proposals would stimulate demand in a “fiscally prudent way”.

She refused to indicate whether the government was prepared to consider additional stimulus measures between now and the budget which is traditionally presented on the first working day of February. “Let us wait and see the response to these proposals,” she said.

“There will be no change in the borrowing target for the current fiscal,” said economic affairs secretary Tarun Bajaj.

“We have taken into account estimates for the stimulus that we would be taking. At this point of time, our estimate remains at Rs 12 lakh crore for the current fiscal,” he said.

Economists said the measures were intended to spur consumer and capital spending but their fiscal cost and impact on economic activity appears to be fairly modest.

N.R. Bhanumurthy, vice-chancellor of Dr BR Ambedkar School of Economics University, Bangalore, said: “The demand side measures would have an immediate impact but the supply side measures would start showing its results with a lag. The stimulus packages announced so far give an indication that the country’s nominal GDP for the current fiscal would be positive. One has to watch out the inflation numbers if the supply constraint fails to cope up with the demand.”

Retail inflation rose to 7.34 per cent in September, far above the comfort level of the Reserve Bank of India which prompt the central bank to hold interest rates in the coming months.

“The fiscal impact of the additional expenditure by the central government will be around 0.2 per cent of GDP. We expect the fiscal deficit to be around 9.2 per cent for this fiscal assuming these funds have to be raised by the Centre this year to finance such spending,”  said Madan Sabnavis, chief economist at Care Ratings.

Aditi Nayar, principal economist, ICRA, said: “We anticipate that the LTC and festival advance schemes will result in a temporary boost to consumer sentiment and economic activity, with a sharper pick up in festive season sales that would subsequently fizzle out…. The relatively small magnitude of the long-term loans to be provided by the Centre to the states is unlikely to provide any meaningful boost to capex in FY2021, in our assessment, although it may allow for an accelerated settlement of pending dues of contractors or suppliers.”

“The timing of these announcements is just right as we are entering the festival season and this should help improve consumer sentiment and demand in the economy. These announcements also give us additional reasons to review the GDP growth forecast for the full year and we hope to be back in the positive growth terrain by the last quarter of this fiscal,” said Ficci president Sangita Reddy.

Chandrajit Banerjee, director general of CII, said: “The two-pronged strategy will provide a huge impetus to spending both by consumers and government which in turn will accelerate economic activity.”

This is the third stimulus package since the outbreak of the Covid-19 pandemic.

The government announced the Rs 1.70 lakh crore Pradhan Mantri Garib Kalyan Yojana (PMGKP) in March to protect poor and vulnerable from the impact of the Covid-19 crisis.

It was followed by Aatmanirbhar Bharat Abhiyan package of Rs 20.97 lakh crore in May, which was largely focused on supply side and long-term reforms.