Advertisement
Home / Business / Cryptos like Bitcoin, Ethereum, and Dogecoin tumble by more than 10%

Cryptos like Bitcoin, Ethereum, and Dogecoin tumble by more than 10%

The government is planning to introduce The Cryptocurrency and Regulation of Official Digital Currency Bill, 2021 in the Winter session of the Lok Sabha 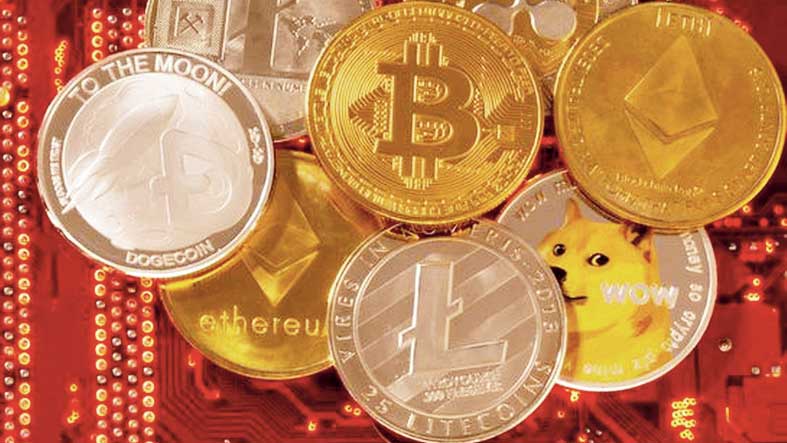 Crypto currencies like Bitcoin, Ethereum and Dogecoin tumbled by more than 10 per cent as investors scrambled to unwind positions, spooked by reports that the Narendra Modi government was readying to introduce regulations that may ban or severely restrict the operation of crypto exchanges in the country.

The government is planning to introduce The Cryptocurrency and Regulation of Official Digital Currency Bill, 2021 in the Winter session of the Lok Sabha which starts later this month.

The slide in the crypto currencies was sharp and persisted throughout the day as investors and other stakeholders tried to make sense about the likely impact that a regulatory regime would have on an investment avenue that has yielded blowout returns for investors over the past few years.

Meanwhile, speculation swirled that the Modi government could leave a small door open for crypto currencies by agreeing to treat them as a financial asset and permitting only a minimal investment in digital currencies. None of this could be confirmed. The talk of some wiggle room for crypto currency trades did not, however, soothe the nerves of panicky investors.

Even Tether, the crypto currency whose tokens are backed by an equivalent amount of dollars, was down 8.63 per cent at Rs 74.33 at 5:15 PM.

An outright ban will send shock waves through this fledgling market and place a question mark on the fate of the investments made by an estimated 15-20 million crypto currency holders in India. There are more than 10 crypto currency exchange platforms in India.

Several exchanges were facing deposit and withdrawal challenges amid high transaction volumes and a sharp spike in concurrent users and traffic. Earlier in the day, WazirX said on its official Twitter account said that it was investigating delays faced by users of the app and the website which was later fixed.

The founders and CEOs of crypto exchanges scrambled to calm the panic among investors.

“This is not the end but the beginning of crypto regulations in India. Industry has the opportunity to present. Law makers understand the growing market. There are ways to curb the bad activities and promote innovation. Don’t panic,” said Nischal Shetty, founder and CEO of WazirX India.

Coin DCX co-founder and CEO Sumit Gupta said cryptocurrency prices are governed by market demand and not based on geographies as they are inherently decentralised and distributed.

“Due to this news, we are witnessing significant discounts only in the Indian markets. Global markets remain unaffected,” the CoinDCX  chief said.

“We shall follow the directions provided by the government. For now, I urge all crypto asset investors in the country to remain calm, do their own research before arriving at a rushed conclusion,” said Ashish Singhal, founder and chief executive officer, CoinSwitch Kuber.

“There is no need to panic at this point. Funds are safe and ZebPay has and will adhere to all laws and regulations on this matter,” said Avinash Shekhar, co-CEO, ZebPay.

Industry officials were cautious in their comments and are waiting for the bill to be tabled to see how the government defines a private crypto currency and how it intends to regulate them.

“We have to wait and watch, especially to see how the government defines private crypto currency. The government’s focus is primarily to reinforce financial stability and prevent money laundering,” a source said.

Sources said crypto currencies were not being use to make payments in India as they are not a recognised currency in the country.

Industry mavens said that if crypto investments are treated as assets instead of means to make payments, then a blanket ban may be avoided and the country can take advantage of the underlying technology.

A blanket ban may also be difficult to enforce as certain crypto currencies offer users the ability to send and receive money anonymously and it is also a challenge to monitor and trace transactions conducted through private networks.

In July this year, the RBI  said it was working on plans to introduce a central bank digital currency that will act as a legal tender and will have the same characteristics as a fiat currency.