As many as 32% forecast job cuts in the range of 15-30 per cent once the lockdown ends: CII 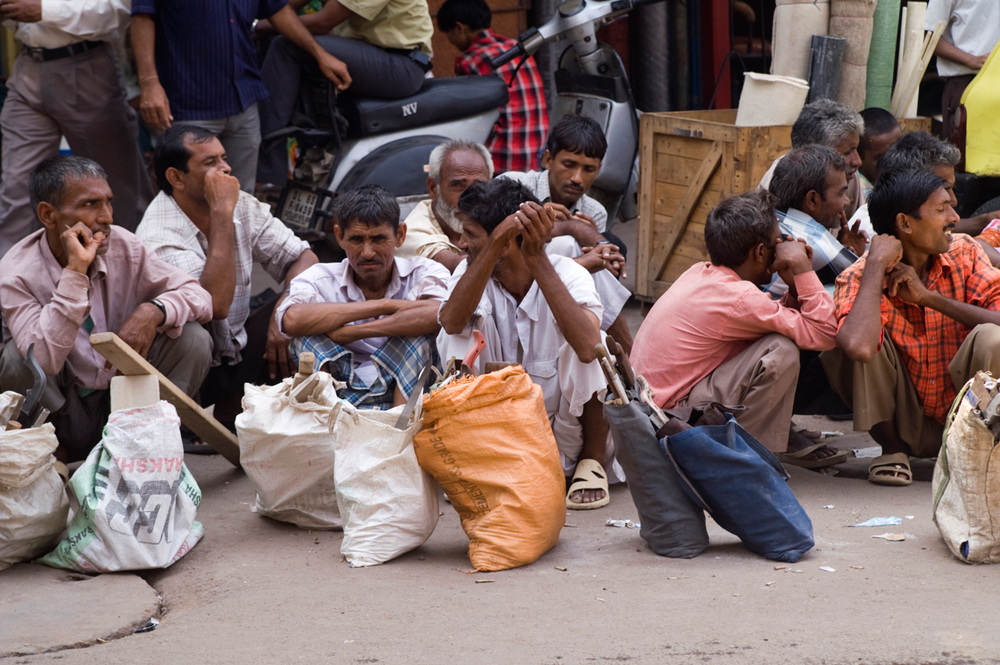 Since the spread of Covid-19 and the announcement of the lockdown, economists have lowered their growth forecasts for the economy. Some even expect the economy to contract in the current quarter.
(iStock photo)
Our Special Correspondent   |   Mumbai   |   Published 05.04.20, 06:56 PM

A snap poll of 200 CEOs by the Confederation of Indian Industry (CII) showed a majority expecting a sharp fall in demand and revenue, while warning of job losses.

The online survey covered around 200 CEOs across various sectors, to ascertain the impact of the coronavirus and the subsequent lockdown on their operations.

“The survey results indicate that a significant majority of the firms expect revenues to fall more than 10 per cent and profits to decline more than 5 per cent in both the current quarter (April-June 2020) as well as the preceding quarter (January-March 2020),” the CII said.

“The expectations of this sharp decline in both revenue and profit growth by domestic firms could foretell the significant impact of this (coronavirus) outbreak on GDP growth,' the industry body said in a statement.

Further, the survey warned of companies resorting to sharp job cuts to stay in business. About 52 per cent of the respondents feared job cuts. As many as 32 per cent forecast job cuts in the range of 15-30 per cent once the lockdown ends, while 47 per cent projected job losses of less than 15 per cent. 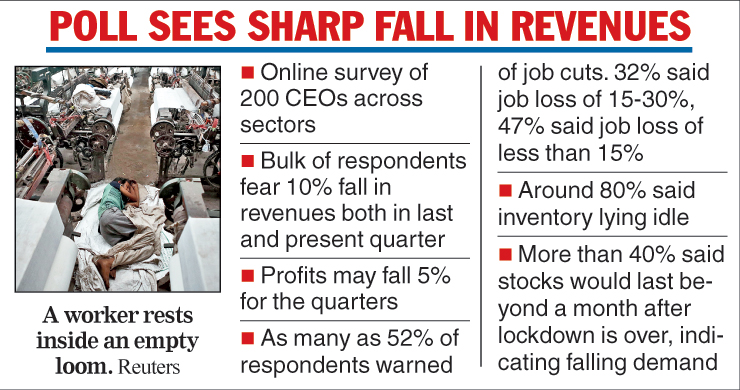 More than 40 per cent said their stocks would last beyond a month once the lockdown ends, indicating demand slowdown after the economy opens up.

Besides, a majority of companies engaged in the production of essential products and the supply of ancillary goods have said the lockdown has constrained their operations.

Access to manpower and movement of products have emerged as the major constraints in the essentials trade, encompassing manufacturing, warehousing, transport and retail sales. The respondents also cited constraints at the points of sale of the essential items.

'The government could announce a fiscal stimulus package for the industry and implement it on fast track mode, given that the sudden imposition of the lockdown has significantly impacted industry operations and the uncertainty of a recovery threatens substantial loss of livelihoods going forward,' CII director-general Chandrajit Banerjee said.

Since the spread of Covid-19 and the announcement of the lockdown, economists have lowered their growth forecasts for the economy. Some even expect the economy to contract in the current quarter.

“Given the nature of the crisis and consequent containment measures, forecasting corporate earnings for 2020-21 has become difficult with existing earnings estimates facing sharp downside risks,' brokerage Motilal Oswal said in a recent report.

Various international credit rating agencies have slashed their growth estimates for India.Fitch Ratings has said India may post a GDP growth of 2 per cent in this fiscal, the slowest since the economy was liberalised 30 years back.

Asian Development Bank (ADB) has forecast India's growth will slip to four per cent in the current fiscal, while S&P Global Ratings last week again cut its growth forecast to 3.5 per cent from the previous downgrade of 5.2 per cent. Moody's Investors Service has also slashed its estimate of growth during the current year to 2.5 per cent, from an earlier estimate of 5.3 per cent.