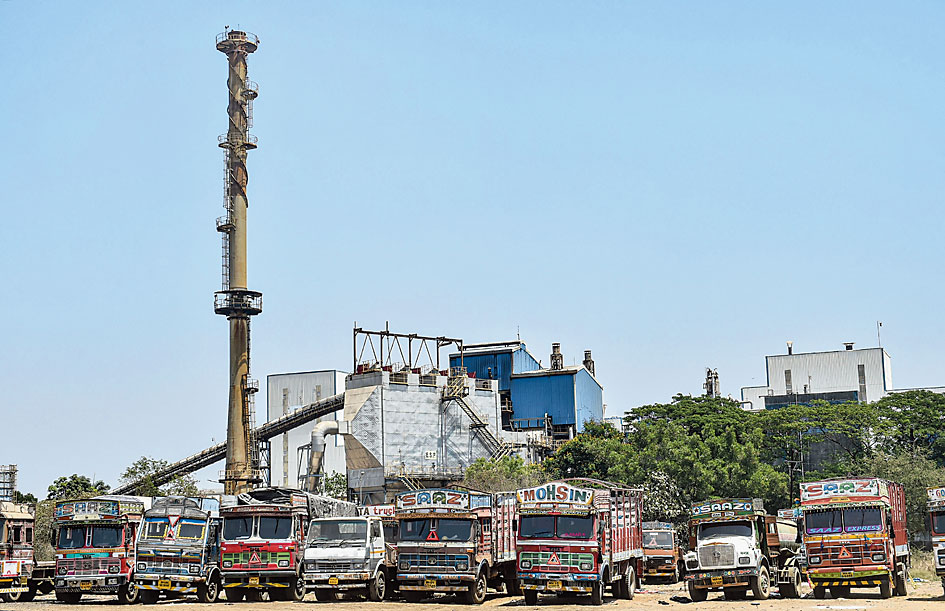 “It is expected that close to 40 million jobs are at risk during the April-September period of 2020. Hence an urgent relief package is also critical,” Sangita Reddy, president of industry chamber Federation of Indian Chambers of Commerce and Industry (Ficci) said.
(PTI)
Our Special Correspondent   |   New Delhi   |   Published 14.04.20, 09:07 PM

Industry has sought an urgent relief package from the government as it warned of job losses and highlighted the plight of medium and small enterprises (MSMEs) because of the lockdown, which has now been extended till May 3 even as the Centre said the economy would gradually open from Monday.

“It is expected that close to 40 million jobs are at risk during the April-September period of 2020. Hence an urgent relief package is also critical,” Sangita Reddy, president of industry chamber Federation of Indian Chambers of Commerce and Industry (Ficci) said in a statement after the PM’s address to the nation.

Reddy said a gradual opening up of the economy from April 20 (Monday) would ensure there would be no shortages in the economy when the lockdown was over.

“Even in case of essentials, we are seeing that supplies have started to get impacted and so the easing of lockdown may help ramp to up production,” she added.

Prime Minister Narendra Modi in his televised speech on Tuesday morning said some restrictions on critical activities would be lifted in districts not designated as virus hotspots from April 20.

The Prime Minister said detailed guidelines would be issued on Wednesday.

“The PM could have utilised this golden opportunity to announce relief measures for the millions of precarious daily-wage workers and the migrant workers who will now be potentially unemployed for 40 days rather than issuing another moral advisory to the employers not to terminate the employment of workers,” according to K. R. Shyam Sundar of XLRI.

“He could have also sent signals to the MSME sector who will equally be vulnerable due to the extended lockdown. Both precarious workers and small industries need solid legal and financial support. The livelihood of workers and the sustainability of small businesses are seriously at risk,” he said.

The Confederation of Indian Industry (CII) pitched for measures tailormade to support MSMEs, considering they are the backbone of the manufacturing and export sectors.

“With limited resources, MSMEs do not have the capacity to withstand massive shocks like Covid-19. In addition, many MSMEs are an important part of larger supply chains.

“The health of these MSMEs will have a bearing on the entire supply chain, including the large corporate,' CII director-general Chandrajit Banerjee said.

He said special, immediate and substantive support measures were required to see the MSMEs through the crisis.

The Associated Chambers of Commerce and Industry (Assocham) said there should be a further reduction in interest rates and the suspension of Bankruptcy Code provisions for six months.

“There is a broad national consensus that the government can go in for a wider fiscal deficit, even through the unconventional tool of monetising it by direct bond buying by the RBI. Subsistence funds are required both for the industry and trade as also their employees,' Deepak Sood, secretary-general of Assocham said.

Exporters body FIEO said the micro, small and medium enterprises (MSME) do not have adequate liquidity to pay wages to their employees for the month of April.

“The exporters, particularly MSME exporters, have no liquidity to pay wages for the month of April as they are unable to conduct any business activity during the lockdown,” FIEO president Sharad Kumar Saraf said in a statement.

He also expressed disappointment on the deferment of the decision to allow selective opening of the manufacturing sector, particularly export units. 'We were expecting some announcement in this regard in the Prime Minister's address to the nation this morning. Non-adherence to the delivery schedule for exports will result in cancellation, penalties and market loss, besides the business loss to enterprises, he added.

The challenge for the Centre and the states now is to ensure truck drivers are back to work, otherwise the relaxations from Monday would become ineffective, said S.P. Singh of the Indian Foundation of Transport Research and Training.

Traders demanded the availability of movement passes to those handling essential items. “About 1.5 million traders deal in essential commodities, but only 40 lakh have been able to continue the supply chain of essential commodities across the country, because of difficulties in obtaining passes from the authorities and the non-availability of transport,” Praveen Khandelwal of the Confederation of All India Traders (CAIT) said.