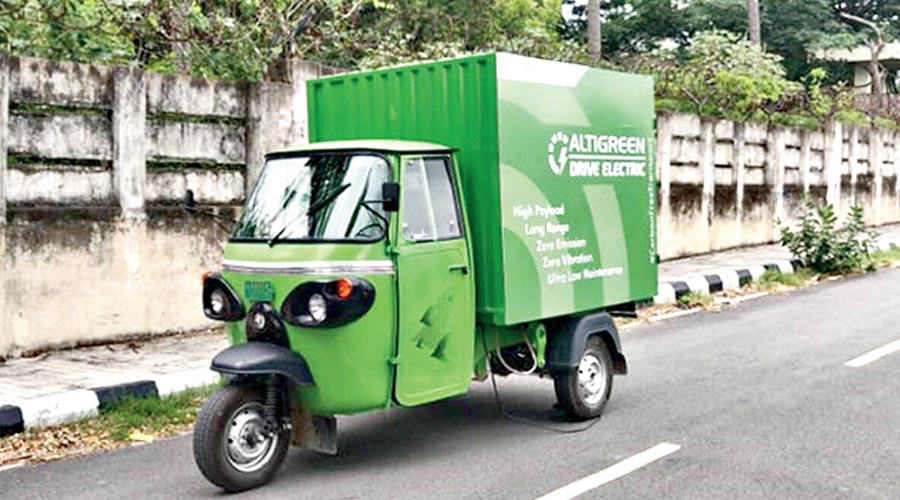 Bangalore-based EV manufacturing company Altigreen has launched its large-format electric three-wheelers in Calcutta. The company has delivered the vehicles to Mahindra Logistics Limited.

The company, which operates B2B, manufactures and sells last-mile cargo delivery vehicles to companies in the transportation sector.

The start-up entered the market in eastern India by supplying the first batch of 15 electric three-wheeler delivery vans, the Neev Highdeck, to Mahindra Logistics.

The company makes four variants of its electric delivery van Neev — the Neev Flatbed, the Neev Chassis Cabin, the Neev Lowdeck and the Neev Highdeck. Its vehicles have payloads of 500kg and 550kg. The vehicles can be fully charged in 3.5 hours.

The company has a 35,000 square feet manufacturing plant in Bangalore with a capacity of 6,000 vehicles per annum. At present, it is operating at 70 per cent utilisation. Since August 2021, it has sold 150 vehicles in eight cities and hopes to sell 1,500 vehicles by year-end.

“The increasing popularity of e-commerce and FMCG players are causing fast adoption of EVs in cargo operations. With the emergence of high-volume, low-weight categories such as e-commerce, fruits, vegetables, medicines, white goods distribution, retail and others, there is a strong need to  move out from diesel options to make way for clean, efficient, reliable and low-cost EVs in intra-city commercial transportation,” said Amitabh Saran, CEO, Altigreen.