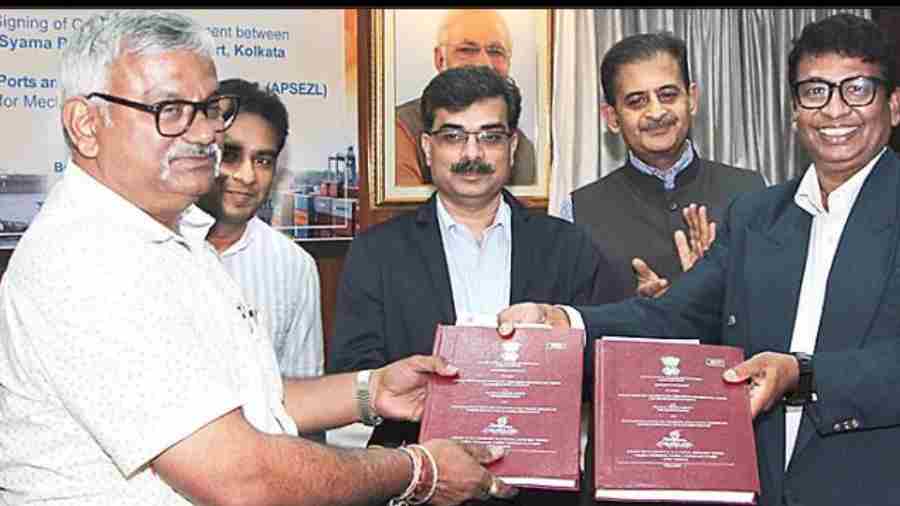 Officials of Syama Prasad Mookerjee Port and APSEZ at the port’s headquarters in Calcutta on Thursday.
Sourced by The Telegraph
Our Special Correspondent   |   Calcutta   |   Published 16.09.22, 12:49 AM

The company was the top bidder and SMP, formerly Calcutta Port Trust, issued a letter of intent in February. A cloud of uncertainty that hung over APSEZ’s eligibility to bid after the cancellation of a contract by Visakhapatnam Port Trust (VPT) had delayed the final contract.

After the Supreme Court ruled last week that the cancellation of the contract by VPT would not be treated as a disqualification or ineligibility of APSEZ for future projects, the decks were cleared for the formal signing of the contract.

Commenting on the development, Karan Adani, CEO and whole-time director of APSEZ, said: “The mechanisation and upgradation of Haldia Bulk Terminal provides us the opportunity to firmly establish APSEZ’s footprint in Bengal. We remain committed to further accelerating the ever-growing industry and economy of Bengal.”

APSEZ had also emerged as the H1 bidder for the Bengal government port project at Tajpur, down south of Haldia, in March. The legal uncertainties had paralysed the decision-making process within the government. With the SC giving a clean chit, the state may soon follow the footstep of SMP and formally declare the winner of the bid. Gautam Adani, chairman of Adani Group and Karan’s father, had attended the Bengal Global Business Summit in April in Calcutta and promised to invest in multiple business sectors in which his group is present.

The Tajpur port, if and when it materialises, along with the Haldia berth will allow Adani to synergise its operations on the east coast. The company operates a number of ports and terminals, most notably Dhamra Port in Odisha. According to the concession agreement signed between SMP and HDC Bulk Terminal Ltd, the special purpose vehicle formed to implement the project will get the rights to design, build, finance, operate, maintain and manage the bulk terminal (berth no 2) with a capacity of 3.74 million tonnes (mt) per annum for a concession period of 30 years at Haldia Dock Complex, Haldia.

Following the concession agreement, HBTL will undertake the financial closure for the project within six months and commence the construction of the terminal. The estimated cost of the project is Rs 298 crore. The project has already received the necessary environment clearance. “With this fully mechanised facility, we aim to set a higher benchmark in port operations and environmental practices. This terminal, alongside our existing world class ports and terminals along the east coast of India, will synergise APSEZ’s services and enhance customer experience. Our leadership in integrated logistics will significantly enhance HBTL’s efficiency and benefit the shipping industry,” Adani added in a statement.

In a separate statement, SMP said Adani emerged as the highest bidder by quoting a royalty of Rs 75.07 per tonne. The berth will commence operation from September 2025. Port will earn a revenue of Rs 22.5 crore from the berth.