Review: The all new Tata Safari 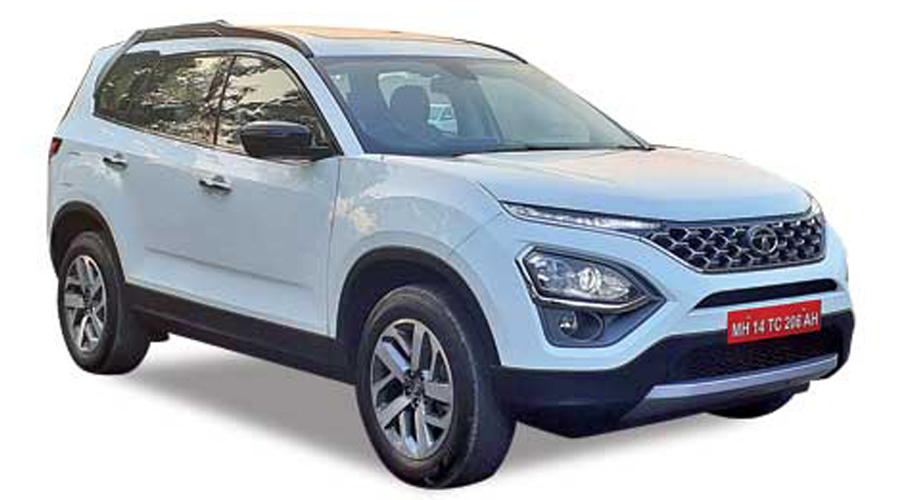 The Tata Safari is back. Or is it? The short hiatus between the discontinuation of the ‘Storme’ version and introduction of the current one seems to have been significant considering how different the two vehicles are. However, there are things in common too that justify the new one being called Safari.

Now the Safari is in essence the six- or seven-seater version of Tata Motors Harrier mid-size, five-seater SUV and is largely similar to it till the end of the rear doors. Up front, there is a new grille with the Tata Motors tri-arrow motif. There are other minor differences in that area but not a great deal. The flanks continue the chunky looks and with the wheelbase remaining the same, so do the doors and other panels.

There is change, however. Rather than the sloping back roof of the Harrier, we get a stepped up one with roof rails — load-bearing ones in the models without the panoramic sunroof, and non-load bearing ones in the ones with the panoramic sunroof. The glass window between the C and D pillars is bigger and there’s a plastic strip that rises from one side and ends on the other. Together, the roofline, roof rails and glass area treatment hark back to the old Safari. To make all this happen and fit in the all-important third row of seats the rear section is now about a couple of inches (63mm) longer. Weight gain is in the range of 70kg over the Harrier. The tailgate, too, is pretty upright and not too raked, although it looks pretty similar to the Harrier’s.

The alloy wheels are now 18-inch ones with 60 profile tyres that add to that planted appearance. The look is mature and, thankfully, not flashy. Chances are it will age well. 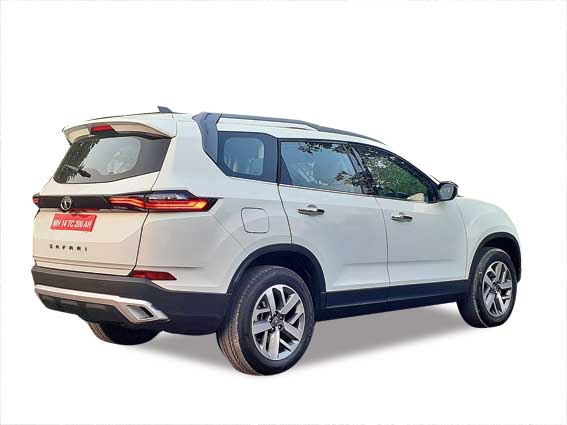 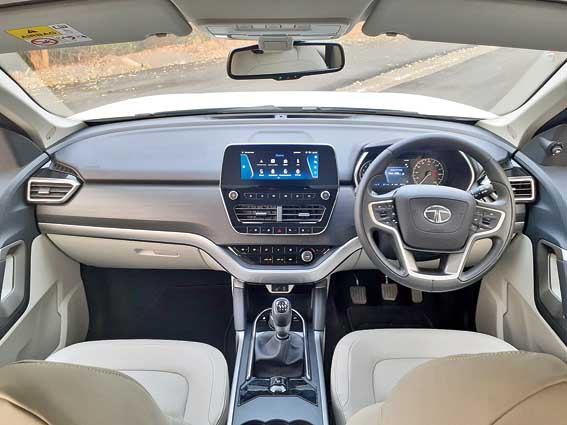 The layout of the interior is smart, largely the same as that of the Harrier, but the finishes and colour schemes are different

Like the outside, the changes up to the second row are minimal. Tata Motors seems to have followed the philosophy of not fixing something that ain’t broke and left the interior design mostly unchanged. The grey and white (there are some fancy names for those, but essentially that’s what they are) colour scheme works well. The leather at the touch points feels good too. And the steering in particular is nice to hold and use. There’s a sense of premiumness one gets when he or she steps into the vehicle.

Storage spaces galore, the glove box has a shelf for tablets and notebooks, the AUX and USB ports in front are now where they are visible. There are even ports for the third row of seats, which also get their own dedicated aircon vents with fan speed controllers. So, yes, the third row, too, has been thought through and paid attention to.

The seating is also stepped in that the second row sits higher than the first and the third higher than the second. So everyone has a view out and doesn’t necessarily have to stare at the back of head of the guy in front.

Getting in and out of the third row is always a bit convoluted and that is true here as well. It’s easier in the six-seater with access between the middle row seats, and a shade more difficult in the seven-seater. 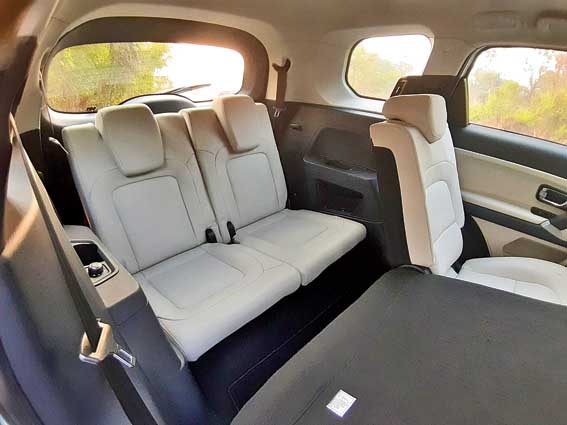 Legroom is quite good for the third row seats and it is comfortable enough, particularly for children and not overly tall persons 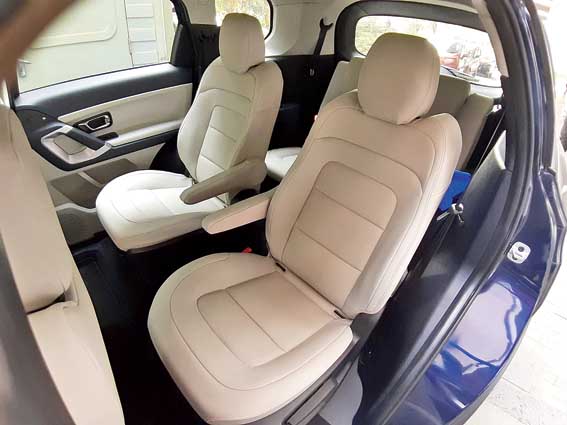 The captain’s seats that come in the six-seater version are very comfortable and have a reclining function too. The passenger on the left can put the seat in front in folding mode to create extra legroom — Boss mode they call it

There is only one engine that is being offered in the Safari and that is the four-cylinder, two-litre, Kryotec diesel. Now this engine does duty in the Harrier as well. In BSIV tune, it used to make 140ps. With the upgrade to BS6 it now belts out a more than adequate 170ps at the peak and a very useful 350Nm of torque from 1,750rpm to 2,500rpm, which is the band that most people drive in most of the time. And while that does not put the Safari in sportscar territory with respect to performance, it is adequate for a family SUV, which is what it is. In fact, with the manual it is not a great deal of pleasure to push it too hard. Around its redline the engine gets a tad noisy and the whole effort doesn’t bear a lot of reward in terms of performance. But one could do that if push came to shove.

Personally, I thought the Hyundai-sourced, six-speed automatic was far more suited to the personality of this vehicle than the six-speed manual shifter. It was fairly responsive changing up or down the cogs and the driving was way more relaxed. Given the traffic on that day, we were mostly doing city speeds, and the Safari wasn’t complaining at all. We tried the Sport mode, which was the nicest to use in the city and held on to the revs a little bit better than the City mode. As far as the Eco mode was concerned, we tried it and thought it is best left to times when any sort of urgency is the last thing on the mind. 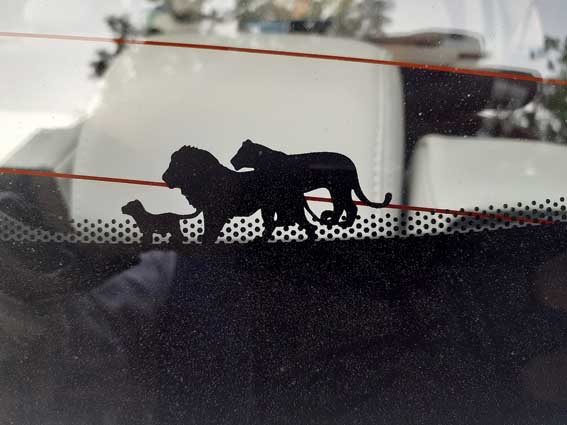 Does this family of lions on the rear windshield denote that this is a family vehicle? We don’t know for sure, but it looks pretty cool anyway

The Safari handled rather better than we expected a vehicle of its size to do. We were reminded that the body-on-chassis construction of the old Safari has now been replaced by the Land Rover derived monocoque. On a highway jammed with morning office hour traffic it was still possible to do squirts through gaps without feeling unduly worried although one had to keep the size in mind. On faster stretches it is even more easy to do this. Kickdown works well with the Kryotec and it does have the necessary shove when called upon to deliver it.

The flip side to that is that the ride was way stiffer than we expected it to be. It does aid in handling for sure, but a vehicle with no pretension of being sporty could well have done with a softer setup in our opinion. 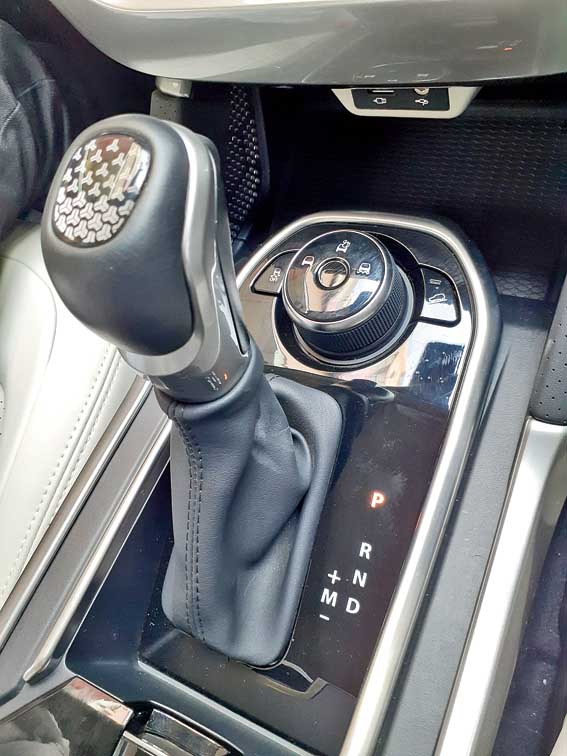 Both the manual and automatic are equipped with stability control and hill descent control features along with a Normal, Rough and Wet terrain response modes. 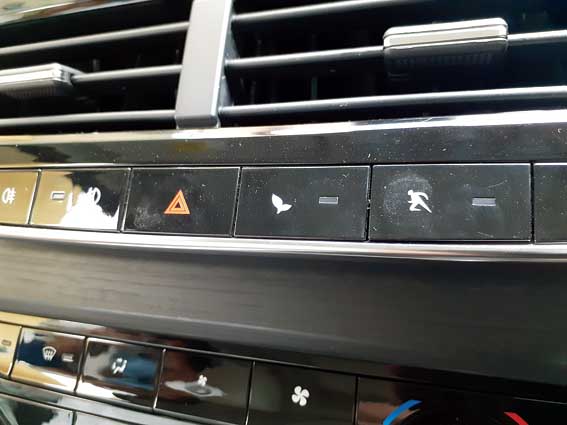 The automatic (below) also has Eco (leaf) and Sport (runner) modes, apart from the City setting

The top version of the Safari that we drove came fully loaded with safety features but here’s what’s there in the entry version: tilt and telescopic adjust on steering, projector headlamps, dual airbags, electronic stability program, hill hold control, traction control, rollover mitigation, corner stability control, brake disc wiping, ABS with EBD and all disc brakes. We like that.

It makes sense to buy the Safari only when one expects to use all the seats fairly regularly. We expect this vehicle to be priced around Rs 15 lakh to Rs 20.5 lakh at the showroom, about Rs 1 lakh more than the Harrier. So buy it to carry seven, for its looks, or for nostalgia. And if you asked us, we’d strongly recommend the automatic. 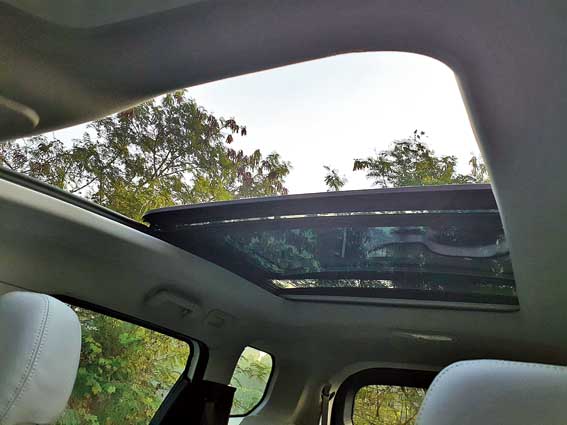 The panoramic sunroof is large and extends back to around the C-pillar, giving a very airy feel to the cabin, although the entire thing does not open