Ready for the rough

Skoda’s latest addition to its SUV lineup, the Kodiaq Scout, is a plush ride that’s also better off the tarmac 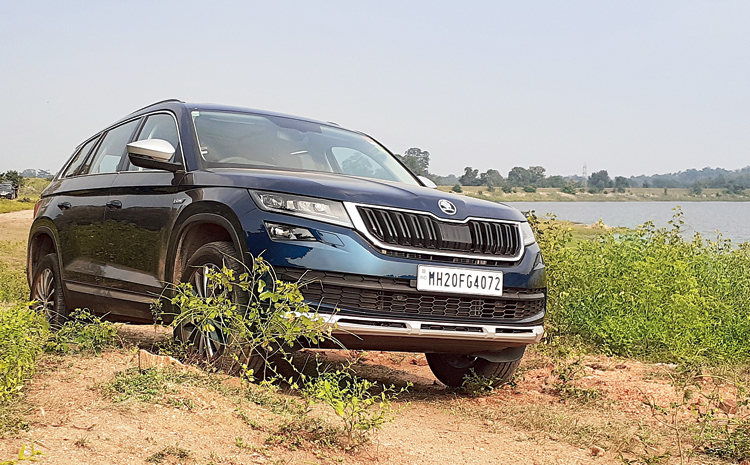 If the hoof marks in the soft earth around the expansive Kohka Lake in Pench National Park were anything to go by, it’s probably a fairly popular watering hole in the reserve. I am no expert in this matter, but one cannot help wondering: If the hoof marks were so many in number, is it possible that I might have missed the odd pug mark or two?

On a clear afternoon in mid-October, however, it wasn’t the wildlife from Mowgli country that was roaming the shore of the Kohka Lake. A different beast was leaving its tracks here. It was a bunch of Skoda’s recently launched Kodiaq Scout SUVs that had gone off the metalled path.

The Kodiaq is Skoda’s biggest SUV, a full-size seven-seater that had been launched a couple of years ago and already had two variants — Style and Laurin & Klement. The Scout slots in between the two and is targeted at those who have some occasion to take their SUV onto softer earth. Here’s a quick look at all that the Scout has to offer.

Considering that the Scout is a new version of the existing Kodiaq, the looks, expectedly, are not hugely different, but there are quite a few things that are. Front on, the chrome strips on the vertical slats of the grille are gone, leaving only the surround. The bumper, too, gets a brushed silver-finish garnish across the bottom, much like a scuff plate. The same finish goes onto the outside rear view mirrors.

Two prominent ‘Scout’ badges on the front fenders tell you what model this is. This version also gets a set of Anthracite alloys, essentially two-tone ones. Running the length of the flanks and right at the bottom is black plastic cladding to prevent the metal getting scuffed on off-road situations.

A significant change from the branding point of view is the replacement of the flying arrow Skoda logo on the hatch door with ‘Skoda’ in bold lettering, something that will now be standard across the range.

Inside the Kodiaq is a nice place to be, but for the Scout there have been a number of changes. The beige bits of the upholstery of the other models have been replaced by black alcantara leather and its matt, suede-like finish is nice to the touch. So the inside is almost all-black now. The dash now gets wood inserts that look premium and also break the monotony of the slabby black. The seats come with ‘Scout’ stitching and there’s the moniker on the woody part in front of the passenger too.

Skoda has made no change to the drivetrain of the Kodiaq in the Scout. So it’s still the 150ps, 2-litre turbocharged diesel engine. It’s still mated to the seven-speed dual-clutch automatic transmission. What is new in the Scout is the Offroad mode. This is essentially ‘hill-descent control’ where one can take one’s foot off the pedals and just steer the Scout downhill with the vehicle itself taking care of the braking and acceleration control up to 30kmph.

Coupled with the automatic power distribution among the wheels — even 85 per cent of the power can be transmitted to only one wheel that has traction — in the 4x4 setup of the Kodiaq, this is a good inclusion. Oddly enough, it’s not available in the higher L&K version.

Skoda has positioned the Scout as a bit of an off-road/adventure vehicle and given it the Offroad mode and styled it in keeping with that overall idea. Nonetheless, this is no hardcore off-roader. Things like variable power distribution to the wheels and hill descent control allow it to drive to places that might be difficult for two-wheel drive SUVs. But the ground clearance has been left at the same 188mm as the other versions. So, the Rough Road package protecting the engine, suspension, transmission and brake lines looks really necessary.

It is tarmac, however, where the Scout, like the other Kodiaqs, gives its best. Cruising is effortless and plush even if acceleration isn’t electrifying. Slow traffic is handled well, too, with all that low-end torque. No complaints on that front.

Compared with the L&K, the Scout gets the Offroad mode and nice interiors but loses 360° camera and Virtual Cockpit and a few of lakhs from the sticker price. It’s probably the best version to go for if one wants to go a bit off the beaten track from time to time.