Advertisement
Home / Auto / Kia’s upcoming flagship, the Carnival, stretches the MPV idea into the higher end of the market

Kia’s upcoming flagship, the Carnival, stretches the MPV idea into the higher end of the market

In terms of footprint, it’s a shade shorter than the BMW 7-Series and other cars of its ilk 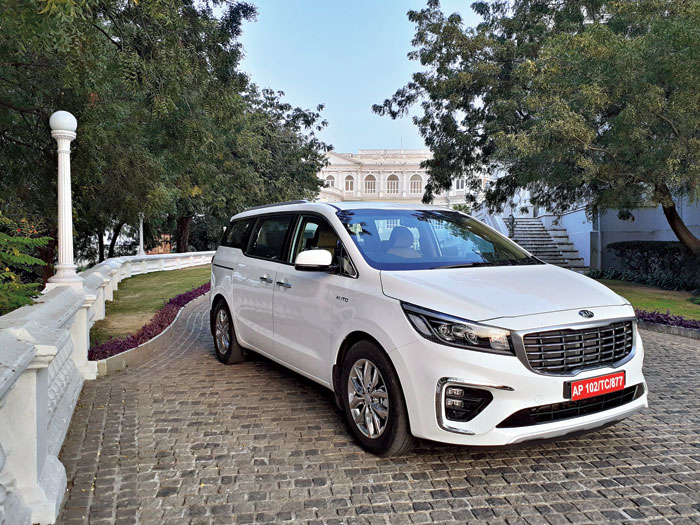 Going by sheer size, there are very few passenger vehicles in India that can beat the Kia Carnival. It’s about the same size as a Mercedes-Benz V-Class MPV. In terms of footprint, it’s a shade shorter than the BMW 7-Series and other cars of its ilk. The size is what strikes you the first time you lay your eyes on the Carnival!

The Kia Carnival isn’t terribly complicated in terms of design. There is just enough contouring to ensure that the vehicle isn’t slab-sided. The front end is handsome — it sports Kia’s corporate ‘tiger nose’ grille, LED projection headlamps and ‘ice cube’ fog lamps with small chrome highlights. The rear end isn’t fussy either with the highlights being the LED tail lamps and a chrome bar that runs above the registration plate, emphasising the substantial, nearly 2m, width of the vehicle.

It’s what lies between the two ends that impresses, the overall

5m-plus length of the vehicle set off by the long wheelbase between the 18” alloy wheels. Adding a bit of flair to the understated look is the floating roof with blacked-out pillars and brush-finished roof rails. These looks would be easy to live with, provided one has a parking space or garage that is big enough to accommodate it. The Carnival is popular in the US, Australia and it’s native South Korea. And the first two are big-car countries.

Ground clearance is somewhere between a sedan’s and SUV’s it seems and it’s a tarmac vehicle. So don’t put too much in store by the scuff plate finishes on the bumpers.

The inside is where the focus of the Carnival is and it has all sorts of creature comforts and utility features. The fully-loaded Limousine trim that t2oS drove has seven seats with two reclining ‘VIP’ seats in the second row that also have extendable leg supports that can be raised to create a recliner-like travelling position. This can, however, be experienced to the fullest in the left side seat with the front passenger seat fully forward and its back rest folded down. Almost lying under the canopy of the rear sunroof one might want to reach out for a daiquiri or mojito while on the go.

The third-row seat is good enough to fit adults in reasonable comfort and with enough legroom. The width allows three persons to sit. There are aircon vents and a USB port available there along with cup holders. So this isn’t an afterthought.

And still there is a 540-litre boot, thanks to the length. And to make it even bigger, Row 3 seats fold flat. The second row also moves sideways to make getting in and out of the third row easier or to fit in a third seat in other versions. The limousine is upholstered in Nappa leather.

The front seats are very comfortable too. They get individual climate zones, a sunroof, ventilation in the powered driver’s seat. Ergonomics is good and things fall to hand neatly. Quality of materials is good all around. The rear doors and tailgate are powered.

The engine and gearbox

A 200ps, 2.2-litre turbocharged diesel is the only engine on offer. It does a good job of hauling the Carnival even on the hilly bits. The torque comes through from fairly low engine speeds and there weren’t any flat spots even when it was being driven in crawling traffic in the older part of Hyderabad. While this isn’t a sportscar, it’s certainly not sluggish and cruises effortlessly at highway speeds with the mill ticking over in the early 2,000rpm range. Also very little engine noise filters into the cabin at those speeds. The eight-speed automatic shifts smoothly and also has a sequential manual mode. It is, however, best left in automatic unless imperative to do otherwise.

The sliding rear door is powered and just a tap on the button on the door handle on the outside or the B pillar on the inside suffices to open or close it.
Author and Kia Motors 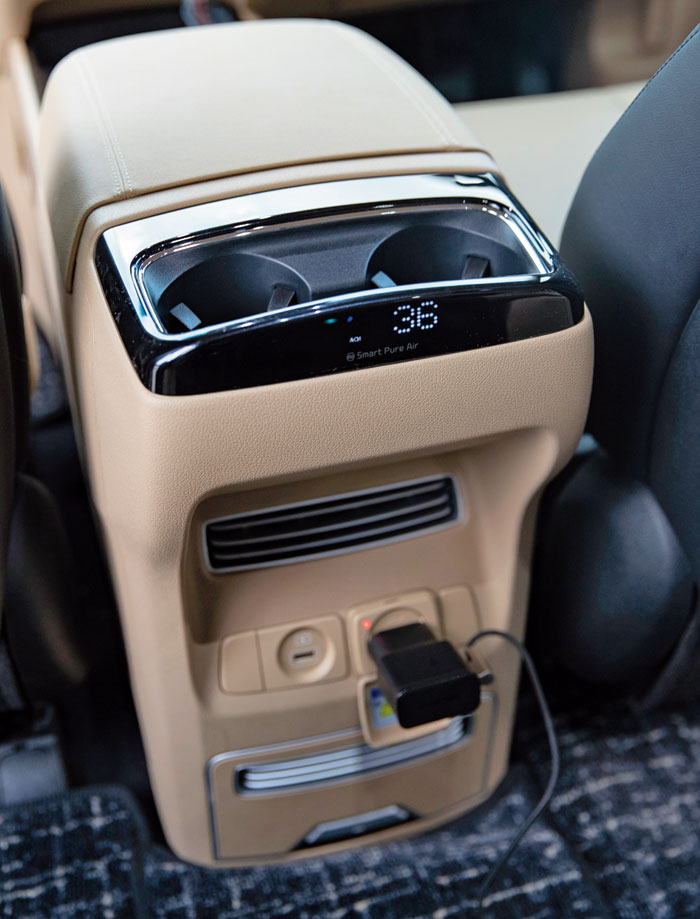 The vehicle has a hepa filter to clean the air and a readout tells you how clean it is. Below it is a 220V, two-pin socket for chargers.
Author and Kia Motors 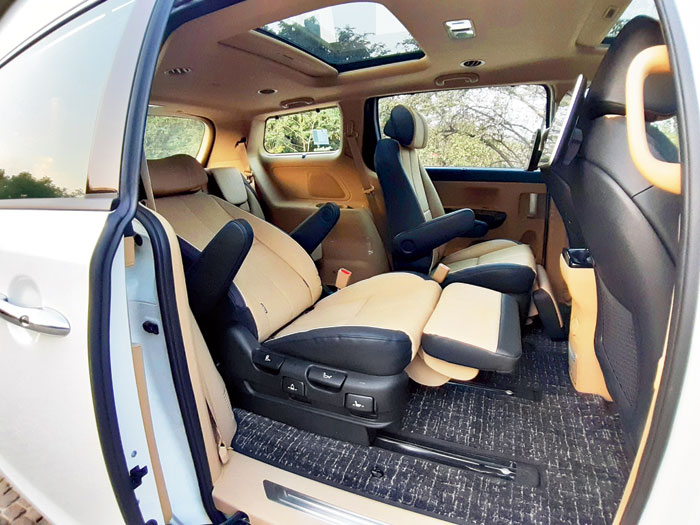 The limousine version comes with VIP seats in the middle row that can recline and is equipped with an extendable leg rest. The seats also move back and forward, as well as sideways to accommodate the various seat set-ups (far right) that can vary for seven to nine occupants.
Author and Kia Motors 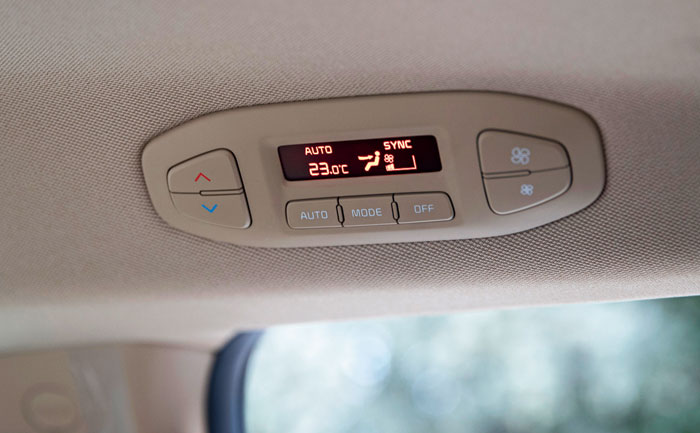 The space behind the front row is a single zone for the climate control and there is a controller cluster on the roof above the rear right door to control it.
Author and Kia Motors 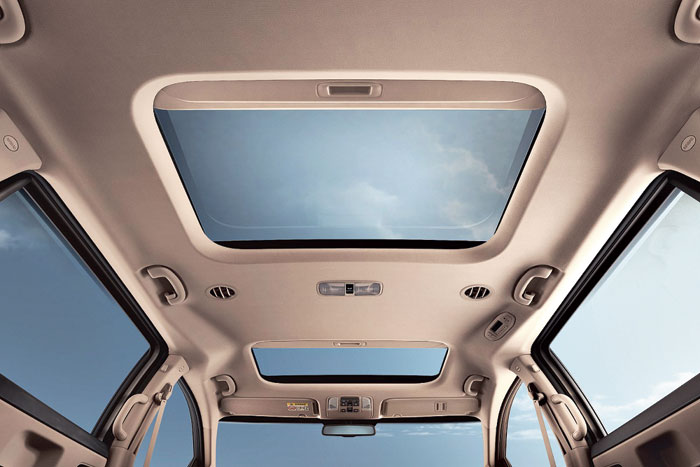 The Carnival has two sunroofs, above the front and the second rows and, when open, gives it a very airy feel.
Author and Kia Motors

This Kia is very plush when it comes to behaviour on the road. It kind of wafts along at highway speeds and swallows up undulations and smaller bumps very well. At the same time it isn’t wallowy and quick manoeuvres did not unsettle it. Nonetheless, it is not a vehicle one would enjoy hustling and a more reserved driving style is best suited for it. The Carnival’s body and chassis are integral and that helps with road behaviour. It’s front wheel drive too. It should be a really good vehicle for long-distance travel, for both driver and passengers since the fatigue level, we think, should be low. The vehicle doesn’t stand very high off the ground so behaves more like a car than an SUV or even other MPVs.

The first thing to figure out is whether one has the space to park it. In real life, using it in Indian cities unless chauffeur-driven will be very inconvenient. This vehicle is meant essentially for tarmac use. Also, it has lots of thoughtful bits — for instance the 220V charging socket, the front passenger side slot in the console for a notebook or tablet with a power source next to it, and the air purifier — that you’ll like.

We are expecting a price in the range of Rs 25 lakh to Rs 32 lakh, give or take. At that level it is good value and can make you feel happy with your buy if it’s a people mover you want.