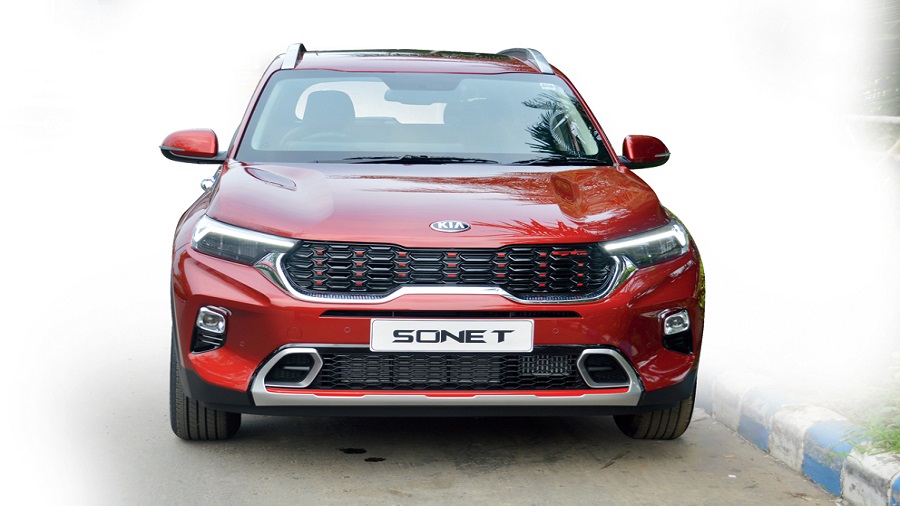 The compact SUV segment is gradually turning out to be the preferred class of cars for those who aspire to own one. There is still some distance to go to catch up with the premium hatchback plus entry-level sedan category, but it is possibly going to dethrone them soon enough.

Not surprisingly, carmakers across the board either have a product in that segment already or are planning to roll out one soon. And Kia Motors, which has been selling cars in India for a year now, is trying to shake things up and pull in the buyer with its contender here, the Kia Sonet.

Like the Seltos before it, Kia is selling the Sonet in an almost bewildering range of engine and gearbox configurations — there are three engines, four if one considers the different states of tune of the diesel as two, as one probably should, and no less than five gearboxes.

The Telegraph drove the top-end automatic versions in GT Line trim in both petrol and diesel that were made available by Celica Kia, which has showrooms in Sector V, Salt Lake, and Howrah. While the details were out already, this is the first time we got a feel of the SUV. Here’s our take.

Our first reaction when we saw the Sonet was that it looks good. Kia has made it nice and chunky with fender flares and bonnet bulges giving it that stocky, muscular look. The ones we drove came with nicely designed 16-inch alloys that filled out the wheel wells. The treatment of the corporate ‘tiger nose’ grille is nice too, with partial chrome surround that sort of links with the daytime running lights to create bright element that goes right across the front. The GT Line has red inserts in the bumpers, along the flanks, in the grille, as well as red brake calipers for the front wheels. The headlamps are LED and the design of this cluster is mimicked by those of the tail lights. Overall, there are lots of horizontal visual cues that make the Sonet look broad and planted. An interesting touch is the treatment of C-pillar section. The tilted-back look and a section going across the roof is reminiscent of pricey boats. We like.

The moment we opened the doors we thought we had seen these interiors before. And we sort of have. Inside, the Sonet GT Line looks a lot like the bigger Seltos. The dashboard with the upright 10.25-inch multifunction touchscreen and the instrument cluster, the black seats with red stitching that seem to have come out of a sportscar, the door pads with the red stitching again, the sun roof, the flat-bottomed multifunction steering wheel with the prominent GT Line across the bottom, the gearshift lever, we’ve seen all of them in the Seltos. And now they are here. So the Sonet feels like a notch up.

Then there are the ventilated front seats that can keep the shirt from sticking to your back in summer. The driver’s seat is height adjustable. The seats, both front and rear, are well-contoured and position is good. Rear legroom is adequate for average Indians and could only get a bit tight if there are six-footers both front and back. The 392-litre boot has no major intrusions and could take a fair bit of luggage.

This model is well-equipped with a wireless phone-charging pad in the front console along with USB sockets front and rear and a 12V socket up front. The air purifier now has additional virus protection.

There are thoughtful bits like a dedicated umbrella holder in the front door that will drain the water, a slot for the phone between the cup holders and next to the charging socket at the back, pockets to fit phones behind the front seats and such-like touches. The top-end model gets a Bose seven-speaker music system that is pretty darn good. The overall fit and finish of the interiors is very good quality and really difficult to fault.

The engines and gearboxes

We experienced two engine-gearbox combos — the 1-litre turbocharged petrol mated to the seven-speed DCT automatic and the 1.5-litre diesel paired with a six-speed torque convertor automatic.

The petrol runs really quiet was the first thing we noticed. One almost doesn’t hear it at all during normal city driving. The gears are well matched and it is very smooth and unobtrusive when given progressive throttle inputs, which is what driving is about most of the time in cities. Knowing it is a small, turbocharged petrol, we felt a pathological need to mash the accelerator down and zap the setup. As expected, there is a turbo lag and some engine gruffness at higher revs. This is not its natural habitat.

To squeeze the most out of this engine, shift into manual mode. The  Sonet doesn’t try to override your gear selection unless it senses that the engine might stall. This is the way to do some spirited driving. But fuel efficiency will surely take a big hit if you do this.

To check all the boxes, the diesel is what you need. The engine in the top variant is in the same state of tune as it is in the Seltos. So power output is 115ps, 15 more than in the lower versions. Now this is punchy. The sound deadening is excellent and most of the diesel clatter has been kept out of the passenger space. With peak torque coming in from a fairly low 1,500rpm, the gearbox has been configured in such a way that it stays in the power band most of the time and response to throttle inputs is immediate. This is a more relaxed setup to have.

The ride and handling

Visually, the Sonet seems to have pretty good ground clearance. So, one tends to expect it to roll and pitch. We were happy to note that there isn’t much of either. In fact, in the diesel, we had to do a sudden avoidance manoeuvre to save some literally ‘low-level wildlife’ that had strayed onto the road, and the Sonet was entirely unflustered through it and handled nice and true. No surprises there. On a few broken patches there wasn’t a great deal filtering into the cabin.
The suspension setup is something that Indian car makers seem to have mastered and Kia is no exception. So it eats up the roughs very well and doesn’t get skittish even carrying some speed over them. Overall, refinement is very good. The Sonet also has traction control with Snow, Mud and Sand modes, but we didn’t get to test any of it. There are also Eco, Normal and Sport modes. Normal is good for most situations.

As far as the vehicle is concerned, the top model that we drove was desirable and has a lot of segment firsts like diesel with a torque convertor automatic, ventilated seats, Bose music system, and so on. So if one wants those features in a car with a small footprint, this is a natural choice. However, we would get to know the prices this week although our guess is they will start around Rs 6.5 lakh. The top variants should go to around Rs 12 lakh is our guess. If that is so, unless one specifically wants a bigger vehicle, the Sonet would do the job very well.