Wildfires continue to rage in France and Spain 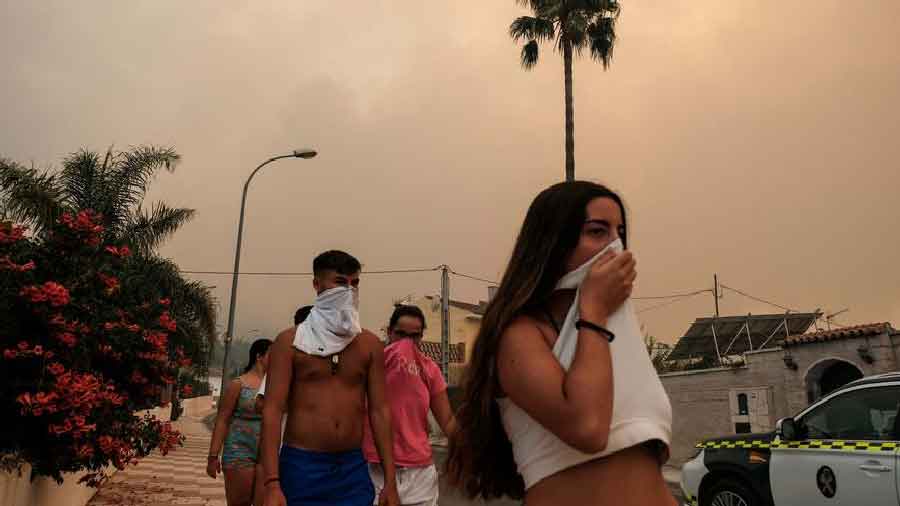 Residents protect themselves from the smoke as a wildfire advances near a residential area in Alhaurin de la Torre in Malaga
Deutsche Welle
Deutsche Welle   |   Published 17.07.22, 06:58 PM

Thousands have been evacuated from their homes by authorities in France and Spain. More than 1,200 firefighters are deployed in Gironde, a prefecture in Bordeaux, France. Thousands of hectares have burned in Portugal. Firefighters struggled on Sunday to contain wildfires raging out of control in France and Spain as Europe wilts under an unusually extreme heat wave that authorities link to a rise in excess mortality.

Two huge blazes have burned their way through pine forests for six days just south of the city of Bordeaux in southwestern France. The fires have forced the evacuation of some 14,000 people, including many who were on holiday in the area.

Firefighters in Spain were supported by the armed forces' emergency brigades in trying to extinguish more than 30 fires consuming forests across the country.

The devastating forest fires are triggered by a summer heat wave in Europe. Parts of the continent are bracing for new temperature records early next week.

Meteo France forecast temperatures of up to 41 degrees Celsius (105 degrees Fahrenheit) in parts of southern France on Sunday, as well as up to 35 in the northwest, with new heat records expected on Monday.

The fire season has hit after an unusually dry, hot spring that left the soil parched and which authorities attribute to climate change.

What is happening in France?

Some 3,000 firefighters backed by water-dumping planes are battling the blazes in southern France, the president said, and Greece sent firefighting equipment to help.

Elsewhere in the country, a fire near the Atlantic coastal resort of Arcachon was contained overnight.

More than one-third of France's administrative departments and subregions faced an "orange" alert, with residents asked to be vigilant. France's heat wave is expected to hit its high temperature of 40 degrees Centigrade (104 degrees Fahrenheit) on Monday.

What is happening in Spain?

Across Spain, firefighters are also battling several wildfires after days of soaring temperatures hit as high as 45.7 Celsius. The Carlos III Health Institute said 360 heat-related deaths have occurred during the recent heat wave.

In a tweet early Saturday, Malaga province emergency authorities said 3,000 people had to be evacuated from their homes, the result of a blaze near the town of Mijas, a town popular with northern European tourists.

Elsewhere in Spain, in the Extremadura region, helicopters dumped water after about 3,000 hectares were torched near Casas de Miravete, forcing two villages to be evacuated and threatening the nearby Monfrague national park.

Fires were also reported in the central Castilla and Leon regions and in northwestern Galicia.

The national meteorological agency maintained various levels of alert across the nation, warning of up to 44 C in some regions.

What is happening in Portugal?

Andre Fernandes, commander of Portugal's National Authority for Civil Protection, said: "We will keep extreme vigilance this weekend," even as temperatures climb down.

The meteorological institute, meanwhile, forecast temperatures of up to 42 C for the coming days.

The government is set to decide on Sunday whether to extend a week-long state of contingency.

Over the course of 2022, until mid-June, 39,550 hectares in Portugal have been ravaged in wildfires, data from the Institute for the Conservation of Nature and Forests shows. In the last week, almost two-thirds that amount has burned.

During the heat wave over the past week, Portugal's Health Ministry said 238 people had died, most were elderly with preexisting health conditions.