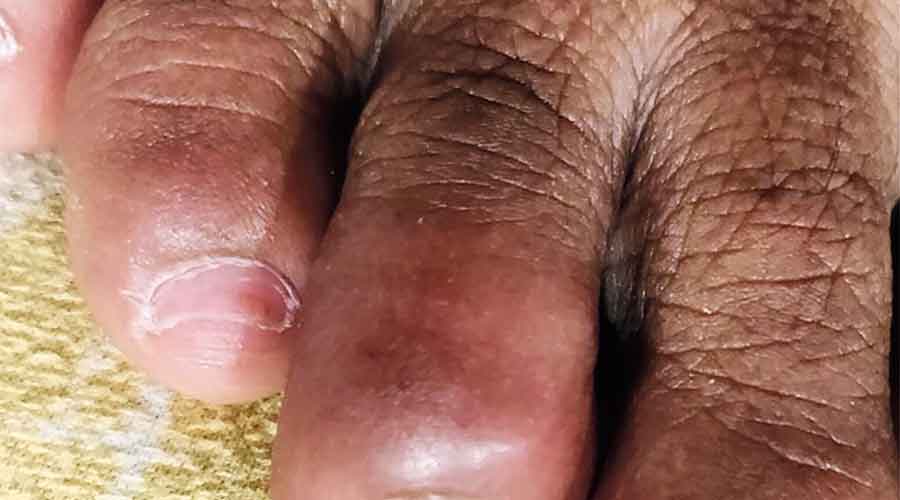 In the spring, teenagers started showing up at doctors’ offices in droves with angry red and purple blisters on their fingers and toes. The latest unexpected feature of the coronavirus infection fascinated the public, and suddenly photographs of so-called Covid toes were everywhere on social media.

But almost all of the images depicted glossy pink lesions on white skin. Though people of colour have been affected disproportionately by the pandemic, pictures of Covid toes on dark skin were curiously hard to find.

The problem isn’t unique to Covid toes or to social media. Dermatology, the medical specialty devoted to treating diseases of the skin, has a problem with brown and black skin. Though progress has been made in recent years, most textbooks that serve as road maps for diagnosing skin disorders often don’t include images of skin conditions as they appear on people of colour.

That’s a glaring omission that can lead to misdiagnoses and unnecessary suffering, because many key characteristics of skin disorders — like red patches and purple blotches — may appear differently on people with different complexions, experts say.

“Pattern recognition is central to dermatology, and a lot of the pattern recognition is training your eye to recognise certain colours that trigger you to think of certain diseases,” said Dr Jenna Lester, director of the skin of colour program at the University of California, San Francisco.

“But the colour in question is impacted by the surrounding colour,” she said. “It can look different in darker skin. If you’re only trained to look at something in one colour, you won’t recognise it in another colour.”

As the coronavirus spread, dermatologists started an international registry to catalogue examples of skin manifestations of Covid-19. The registry compiled more than 700 images, but only 34 of disorders in Hispanic patients and 13 in Black patients were submitted.

It wasn’t until July that Dr Roxana Daneshjou and her colleagues at Stanford University published some of the first pictures of Covid toes in non-white patients in the Journal of the American Academy of Dermatology.

“We know for certain that if dark skin images are not well represented, skin doctors — but also other doctors who are not skin experts — are at a disadvantage for making a proper diagnosis,” said Dr Hao Feng, an assistant professor of dermatology at the University of Connecticut.

Dr Feng reported recently that the omissions are still pervasive in textbooks, where only 10 per cent of images illustrate dermatologic diseases in dark skin. When pictures of Black patients were available, they most often described syphilis. He found that one digital resource, VisualDx, had a more diverse display of images: 28.5 per cent represented dark skin.

“If you have no experience with this in people of colour, it’s like saying you don’t know how to examine the lungs or the heart,” said Dr Art Papier, a dermatologist who co-founded VisualDX.

All doctors observe the skin for clues to disease. Changes in the skin can be the first indication of life-threatening conditions like sepsis, cellulitis or severe drug reactions to medications.

Images of skin cancer in dark skin were underrepresented in educational materials examined in Dr Feng’s study — yet skin cancer, though less common in people with darker skin, is more deadly in Black and Hispanic patients, and often diagnosed at a later stage.

“I can tell you from my own clinical experience a lot of things get missed because people don’t recognise the disease process in darker skin,” Dr Feng said.

Even relatively common skin conditions can stump physicians if they have never seen them in people of colour.

When Dr Lester was in medical school, she recalled, a Black patient came to the clinic with a mysterious rash that had a purplish hue. “No one knew what it was,” Dr Lester said.

A biopsy revealed it was a common skin condition that doctors usually diagnose on sight, without tests or procedures: psoriasis. Yet it often goes unidentified and untreated in people of colour.

The medical literature describes psoriasis as “salmon pink patches with silvery white scales, but that’s not what it looks like in dark skin”, Dr Lester said. “It has more of a purple hue, and a lot of my Black patients put tons of moisturiser on when the skin is dry, so the scales aren’t as visible.”

Many garden-variety rashes will vary in appearance in different complexions. Eczema, which is typically described as making skin red and itchy, tends to be more bumpy in Black people, Dr Lester said. Pityriasis rosea is usually described as having a distinctive pattern composed of a large spot with smaller spots branching out from it — but it may not appear this way in people with dark skin.

Melanoma, the most serious form of skin cancer, often develops in Black people in spots where doctors may not think to look for it: on the palms of the hands or soles of the feet.

“You don’t see as much red if the background skin colour is brown,” she said.

Pallor, which can be an indication of anaemia as well as reduced blood flow and oxygen, will also have a different appearance in Black patients, said Dr Lynn McKinley-Grant, an associate professor at Howard University College of Medicine and president of the Skin of Colour Society, which promotes awareness and education about these variations.

“It’s a different colour, kind of a greyish colour,” she said. “I have actually thought of George Floyd. When he’s on the ground, his skin is a grey brown, showing lack of oxygen.” 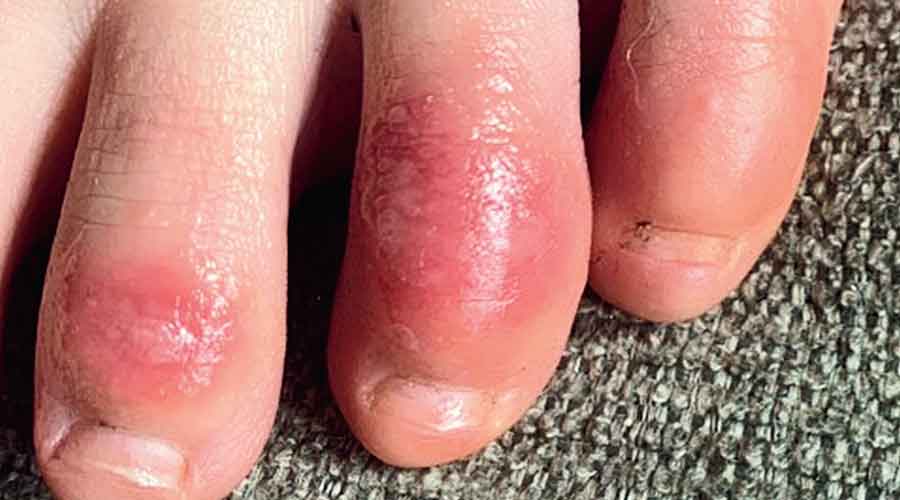 The Covid toe on a white teenager
Telegraph picture

Kawasaki disease, a children’s disease that bears similarities to a Covid-19 complication called multisystem inflammatory syndrome, causes inflammation in blood vessels and presents with redness, but “how it appears in darker skin tone is very different,” said Dr Susan Taylor, associate professor of dermatology at the University of Pennsylvania Perelman School of Medicine.

“You don’t want to miss that in a kid because you don’t know how to look for the rash and your eye isn’t trained to see it,” she said.

Dr Taylor is a co-author of Dermatology for Skin of Colour, one of the first textbooks that focused on the treatment of skin conditions in moderately to heavily pigmented skin. But new textbooks are not the solution, she said.

“We shouldn’t have to write separate textbooks — that information should be integrated into the quote-unquote standard textbooks,” Dr Taylor said.

Nearly half of dermatologists and dermatology residents in the US say they were not adequately trained to treat skin conditions in people of colour.

For Black patients, that often translates into a prolonged, disheartening search for the right diagnosis.

Many Black patients prefer to see Black dermatologists, who may be more familiar with and have a greater understanding of not only skin issues — like acne, which can leave dark, hyperpigmented spots on dark skin — but hair predicaments, said Dr Natalie Moulton-Levy, a dermatologist in Manhattan.

Physicians often say that they “do not see colour”, Dr Moulton-Levy said. “They are trying in a nice, benevolent way to say skin colour doesn’t matter.”

“But it absolutely matters, in dermatology and all of health care,” she said. “‘Colourblind’ is a very difficult term for me to hear.”