Roads, apartment blocks, and parks were sealed off as 22 million residents of the city came under Beijing's strict pandemic protocols 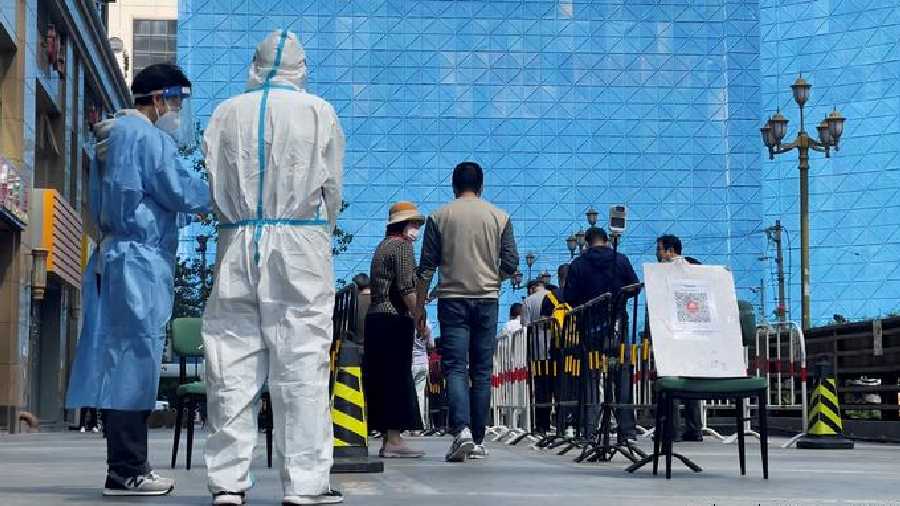 China is pushing ahead with its zero-COVID policy, ignoring citizens' discontent and the mounting toll on its economy.

Currently, dozens of its cities are under full or partial lockdowns, or are under district-based controls as authorities seek to curb the spread of COVID-19 cases.

In Beijing, officials reinforced a work-from-home order on Monday as most subway stations and offices seemed to be empty. Roads, apartment blocks, and parks were sealed off as the 22 million residents of the city came under China's strict COVID-19 protocols.

China's zero-COVID policy is an attempt to prevent any community spread of the coronavirus. To achieve this goal the country has enacted some draconian measures, implementing a strategy of using strict, targeted lockdowns and mass testing. Entire neighborhoods have been sealed off across the country.

In Shanghai, the government had put in place a lockdown lasting weeks in response to a massive outbreak that has been ongoing since March. Officials barred the city's 25 million residents from leaving their homes for any reason other than medical emergencies. The authorities had kept them in lockdown for weeks, and only allowed them to go outside in early May after no cases had been reported outside the strictest quarantine zones for two days in a row. Most recently, Shanghai has launched a new push to end infections outside quarantine zones by late May.

In Beijing, while there has been no official announcement, some residents received notices over the weekend informing them they were no longer able to leave their homes or receive deliveries as part of the effort to drive community infections down to zero.

To achieve China's zero-COVID policy goal, families have been separated after testing positive for COVID, while essential medical treatment has been delayed, fueling public anger.

There has been seething resentment at the perceived bungling of virus controls, mixed messaging and heavy-handedness of Shanghai officials. Officials reportedly swept people with negative COVID tests into state quarantine and demanded keys to their homes for disinfection. Many legal experts have denounced these actions as unlawful.

Social media users have circulated a video documenting the citizens' demands for help. The video shows people asking for basic necessities, crying babies separated from their parents, and relatives pleading for hospitals to treat their dying family members.

Despite efforts to remove the six-minute clip from the Chinese internet, Chinese netizens and members of the diaspora have found ways to preserve the montage on Western social media platforms.

Videos from Shanghai showed neighborhoods filled with the noise of residents protesting by banging pots and pans out their windows. They demanded authorities provide more food and supplies. Other videos show men yelling "give me back my freedom."

One video showed police picking a lock after a resident refused to open a door. In another instance, a voice recording of a call circulated on the internet of a woman arguing with officials demanding to spray disinfectant in her home even though she had tested negative.

Authorities, meanwhile, reject any criticism of the policy which they say is saving lives. In Shanghai, with the implementation of the policy, officials say the city is winning the battle against COVID-19.

What was the effect on China's economy?

China's export growth slowed in April to its weakest level since June 2020, as the effect of Beijing's stringent COVID-19 rules took its toll on its trade.

Imports were stagnant for April, showing almost no growth amid restricted domestic demand.

The Chinese government's zero-COVID policy has seen factories shut across Shanghai, as well as major shipping delays at the city's port.

Several analysts have warned that the trade figures will continue to worsen, underlining the extent of the problems lockdowns have wrought.

The edge of despair