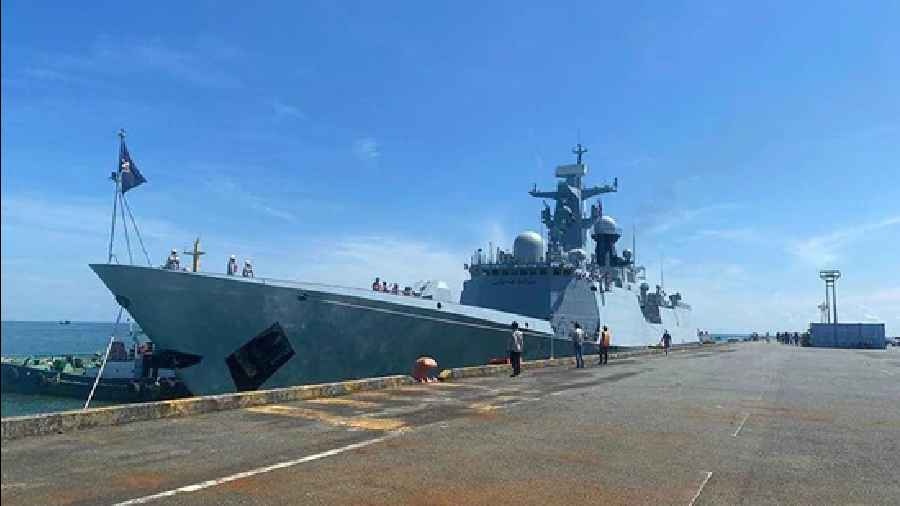 The Sri Lankan Navy on Sunday rejected as "fallacious" media reports that it will hold war games with a Pakistani warship docked at the Colombo port but confirmed that it will hold a "Passage Exercise" in the western seas with PNS Taimur as it leaves the island nation.

The docking of Pakistan's newly-commissioned Chinese-built frigate at the Colombo port on Friday came amid Sri Lankan government allowing a high-tech Chinese research ship to visit the southern port of Hambantota from August 16 till 22 for "replenishment purposes," despite India's concern over the vessel's presence in its neighbourhood.

Sri Lanka allowed PNS Taimur to make a port call in Colombo while on its way to join the Pakistan Navy fleet after the Bangladesh government denied it permission to dock at Chattogram Port.

The Sri Lankan Navy in a statement on Sunday said the Pakistan Navy Ship (PNS) Taimur, which arrived in Sri Lanka on Friday on a formal visit, is scheduled to conduct a Passage Exercise with SLNS Sindurala in seas off Colombo as she departs the island nation on August 15 upon completion of her visit.

"In this backdrop, certain media reports circulating about a 'War Game' between Sri Lanka Navy and Pakistan Navy are fallacious," the release said.

It said that the Sri Lanka Navy, with the concurrence of foreign navies, conducts Passage Exercises as a routine engagement when their visiting naval ships departing the island after making official port calls.

"The prime motive of these efforts is to enhance interoperability, partnerships and goodwill as well as exchange best practices with foreign navies," it said.

It said that the Sri Lankan Navy had conducted similar Passage Exercises with the navies of countries such as India, Pakistan, Bangladesh, Japan, Germany, UK, Russia and Australia on a number of previous occasions.

"Conducting similar naval exercises with regional and extra-regional navies will enable each partner to overcome common maritime challenges in the future, through enhanced cooperation. In addition, such engagements will also be vital for its own maritime operations of the Sri Lanka Navy," the statement said.

PNS Taimur is the second of four powerful Type 054A/P frigates built by China. It was delivered to the Pakistan Navy in Shanghai on June 23. The first ship in the Type 054A/P-class, the PNS Tughril, joined the Pakistan Navy Fleet in January. Two more frigates of the same class are currently under construction in China.

PNS Taimur took part in exercises in Malaysia and Cambodia along its journey to Karachi. The 134m-long ship is a technologically advanced and highly capable sea asset having hi-tech weapons and sensors, the latest combat management and electronic warfare system to fight under multi-threat environments.

The Sri Lankan government on Saturday said that it has allowed Chinese ballistic missile and satellite tracking ship, 'Yuan Wang 5', to dock at the southern port of Hambantota from August 16 till 22 for "replenishment purposes," days after Colombo asked Beijing to defer the portcall amidst India's concern over the vessel's presence in its neighbourhood.

The Chinese research ship was earlier scheduled to arrive on Thursday and remain at the port until August 17 for replenishment. However, the Sri Lankan foreign ministry requested the Chinese embassy here to postpone the vessel's visit following security concerns raised by India. Subsequently, the vessel did not dock at the Hambantota port on Thursday as planned.

The southern deep-sea port of Hambantota is considered strategically important for its location. The port has been developed largely with Chinese loans. India has said it carefully monitors any development having a bearing on its security and economic interests.