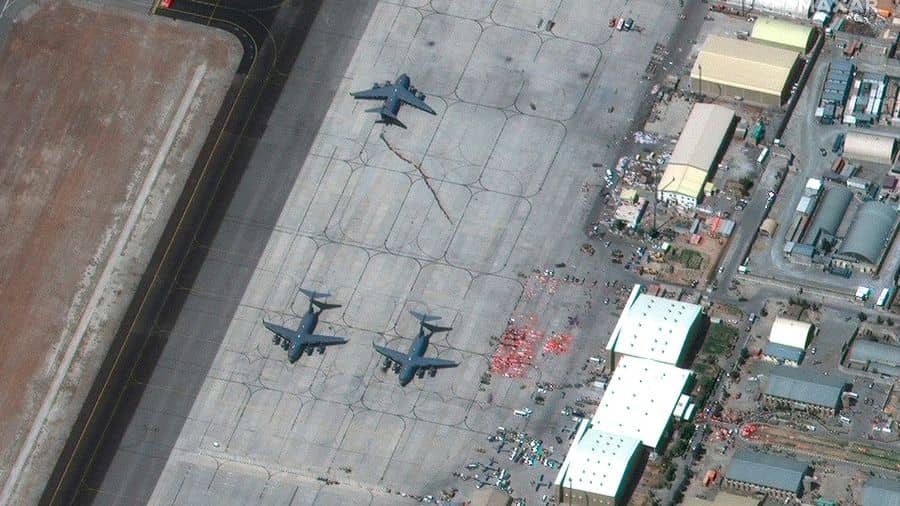 The U.S. military announced its first reprisal strike in Afghanistan since an attack on the Kabul airport killed 13 U.S. service members and as many as 170 other people, as the U.S. officials again warned Americans to leave the airport because of security threats.

“U.S. military forces conducted an over-the-horizon counterterrorism operation today against an ISIS-K planner,” Capt. Bill Urban, the spokesman for the U.S. Central Command, said in a statement, referring to the Islamic State group affiliate in Afghanistan, also known as Islamic State Khorasan, which has claimed responsibility for the Thursday attack.

“The unmanned airstrike occurred in the Nangarhar province of Afghanistan,” Urban said. “Initial indications are that we killed the target. We know of no civilian casualties.”

The attack at the airport was one of the deadliest in the nearly two decades since the U.S.-led invasion. American officials believe “another terror attack in Kabul is likely,” the White House press secretary, Jen Psaki, said on Friday afternoon. “The threat is ongoing and it is active. Our troops are still in danger.”

On Friday night, the U.S. Embassy again warned Americans to leave the airport immediately because of security threats.

While it was unclear how many Americans had risked the trip to the airport Friday, the dangers of another terrorist strike did not keep away Afghans desperate to flee the Taliban.

Hundreds of them continued to crowd Kabul’s airport Friday, even as the death toll from the previous day’s blast neared 200 with hundreds more wounded, keeping the city’s hospitals grimly busy all day.

The size of the crowd at the airport did drop sharply, however, with fear paring the numbers down to hundreds from the thousands of previous days. The suicide bombing ripped right into the jostling throng Thursday afternoon.

The attack also killed 13 U.S. service members, and one of the first to be identified was Rylee McCollum, 20, a Marine who had been on his first overseas deployment, according to his father. He was one of 10 Marines, two soldiers, and one Navy medic killed in the attack, according to defense officials.

On Friday, the Pentagon changed its earlier statement that there were possibly two suicide blasts set off at the airport by ISIS-K, instead saying it was just one.

The U.S. airstrike followed President Joe Biden’s searing remarks from the White House on Thursday, when he pledged to “hunt down” the terrorists who claimed credit for the bombing.

“To those who carried out this attack, as well as anyone who wishes America harm, know this: We will not forgive,” Biden said, using language that had grim echoes of warnings President George W. Bush made after the terrorist attacks of Sept. 11, 2001.

A U.S. Embassy in Afghanistan warning said U.S. citizens at the Kabul airport “who are at the Abbey gate, East gate, North gate or the New Ministry of Interior gate now should leave immediately.”

Two key U.S. allies, Britain and France, announced Friday that they were winding down or had already ended their evacuations of the airport, where crowds on Friday had sought once again to reach the airport, desperately trying to flee the Taliban despite the looming threat of another attack. French officials blamed the lack of security on the “rapid disengagement of the American forces.”

At the airport and in the streets, the U.S. military and the Taliban tried to exert what authority they could. Militants with Kalashnikov rifles kept crowds farther away from the airport’s entrance gates, guarding checkpoints with trucks and at least one Humvee parked in the roads. The U.S. military resumed evacuation flights, and the White House said early Friday that 12,500 people had been evacuated from Afghanistan in the previous 24 hours, despite the attacks.

The waiting crowds, many standing by buses with bags at their sides, numbered in the hundreds, not the thousands of previous days. An estimated hundreds of thousands remain in the country who are desperate for escape from the Taliban rule of Afghanistan, but very few appeared to be getting to the airport gates on Friday.

The airport itself appeared to be largely, if not entirely, locked down. At the airport’s southern and eastern gates, Taliban guards told a reporter that no one was allowed to go near the airport and that all entrance gates were closed. About 5,400 people remained inside waiting evacuation, the Pentagon said Friday.

The grisly scenes on Thursday, when children were among those killed in the crowds, illustrated the intense danger for those braving the high-risk journey to the airport.

On Friday, the U.S. military revised its account of what happened at the airport a day earlier, with Maj. Gen. William Taylor of the Joint Staff saying, “we do not believe that there was a second explosion at or near the Baron Hotel, that it was one suicide bomber.” But many witnesses reported hearing two blasts.

The death toll rose sharply Friday as health officials revised upward the number of bombing victims, which did not include the 13 U.S. service members killed and 15 wounded. The figure of 170 dead and at least 200 wounded was supported by interviews with hospital officials who requested anonymity because the Taliban had told them not to speak with the media, said some of the dead civilians were Afghan Americans, who had U.S. citizenship.

America’s tumultuous exit from Afghanistan has dragged down Biden’s approval ratings, and the bombing on Thursday will surely open him up to political criticism. But it is unclear what the damage will be to his presidency in the long term, as he exits a war that most Americans want out of as well.