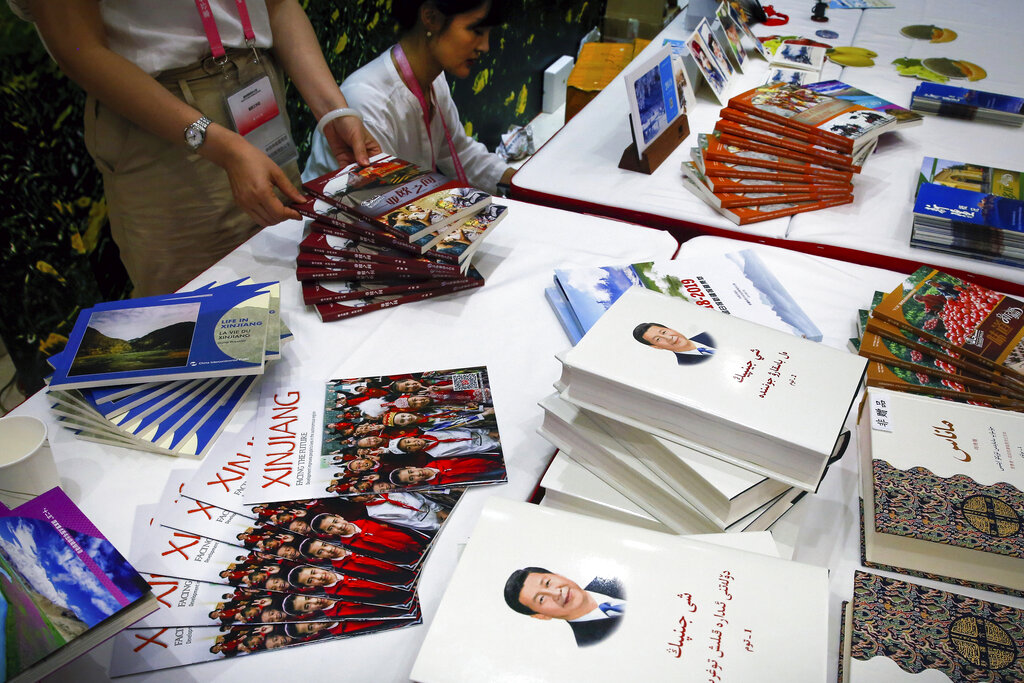 In this July 30, 2019 photo, copies of a book on the governance of Chinese President Xi Jinping are displayed with booklets promoting Xinjiang during a news conference by Shohrat Zakir, chairman of China's Xinjiang Uighur Autonomous Region, at the state council information office in Beijing.
AP
AP   |   Washington   |   Published 09.10.19, 09:57 AM

The Trump administration on Tuesday slapped travel bans on Chinese officials involved in a massive crackdown against Uighurs and other Muslim minorities in its west.

The state department said it would not issue visas to Chinese government and Communist Party officials believed to be responsible for or complicit in mass detentions and abuses in western Xinjiang province. It did not identify the targeted officials or say how many were affected by the ban, which can also be applied to their immediate family members.

In a statement, secretary of state Mike Pompeo urged China to halt its 'campaign of repression' in the region, release all those arbitrarily detained and stop trying to coerce members of Chinese Muslim minority groups residing abroad to return to China.

'The protection of human rights is of fundamental importance, and all countries must respect their human rights obligations and commitments,' Pompeo said.

'The United States will continue to review its authorities to respond to these abuses,' he said.

The announcement came a day after the American commerce department blacklisted Chinese government agencies and a number of Chinese companies that develop facial recognition and other artificial intelligence technology the US says is being used to repress Muslim minorities. The blacklist effectively bars US firms from selling technology to the Chinese companies without government approval.

China is estimated to have detained up to 1 million Muslims in prison-like detention centers in the region.

The detentions come on top of harsh travel restrictions and a massive surveillance network equipped with facial recognition technology. China has denied committing abuses in the centers and has described them as schools aimed at providing employable skills and combating extremism.