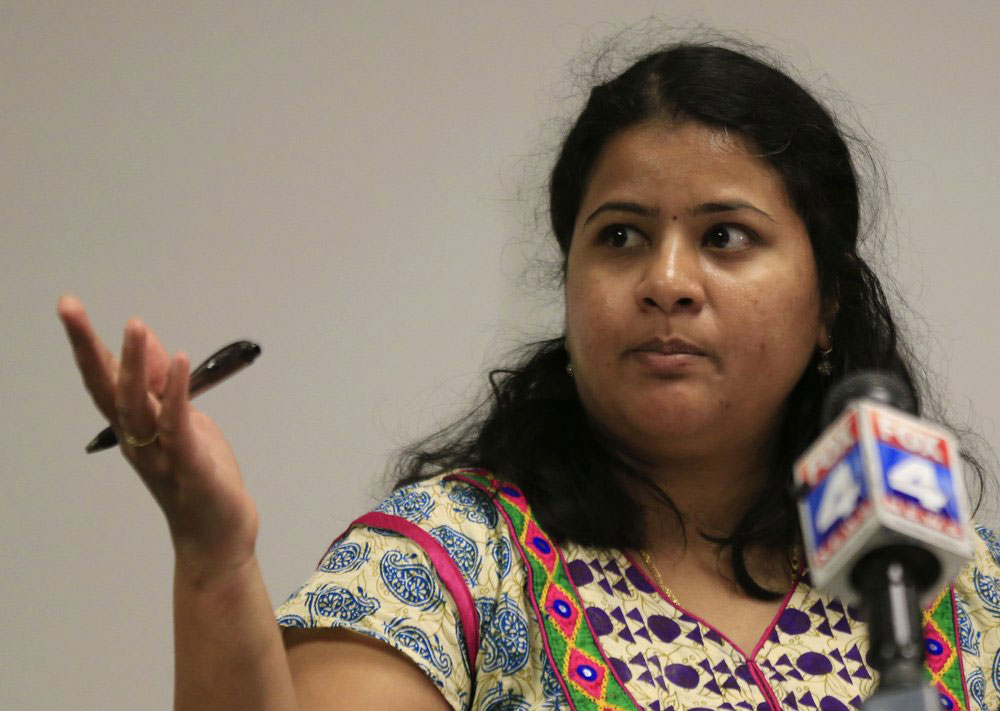 In this February 24, 2017, file photo, Sunayana Dumala talks about her late husband, Srinivas Kuchibhotla, an Indian engineer who was murdered in a Kansas City-area bar, during a news conference at Garmin Headquarters in Olathe, Kansas.
(AP file picture)
PTI   |   Washington   |   Published 11.07.19, 07:23 PM

The US House of Representatives has passed by an overwheming majority a legislation to remove the seven per cent country cap on Green Card applicants, a development which could end the agonising wait for tens of thousands of talented professionals from countries like India who have sought permanent residency in the US.

A Green Card allows a non-US citizen to live and work permanently in America.

Indian IT professionals, most of whom are highly skilled and come to the US mainly on the H-1B work visas, are the worst sufferers of the current immigration system which imposes a seven per cent per country quota on allotment of the Green Card or permanent legal residency.

It was passed on Wednesday by an overwhelming 365-65 votes in a 435-member House.

Lifting the per-country cap would mainly benefit professionals from countries like India, for whom the wait for the Green Card is more than a decade. Some recent studies have said that the waiting period for Indian IT professionals on H-1B visas is more than 70 years.

The bill also establishes transition rules for employment-based visas from the financial year 2020-22 by reserving a percentage of EB-2 (workers with advanced degrees or exceptional ability), EB-3 (skilled and other workers), and EB-5 (investors) visas for individuals not from the two countries with the largest number of recipients of such visas.

Of the unreserved visas, not more than 85 per cent shall be allotted to immigrants from any single country, Congressional Research Service (CRS) said.

The bill, however, has to be passed by the Senate, where the ruling Republican Party enjoys a majority, before it can be signed into law by US President Donald Trump.

A similar bill being supported by a bipartisan group of senators, including Indian-origin Senator Kamala Harris, is slated to come up for consideration soon in the Senate.

Congressman John Curtis, speaking on House floor, said the bill will create a first-come, first-served system providing certainty to workers and families and enabling US companies to flourish and compete in a global economy as they hire the brightest people to create products, services, and jobs — regardless of where they were born.

“This bill would do nothing to move the current employment-sponsored system towards a more merit-based system,” said Joseph S Joh, assistant director and senior advisor in the Office of Legislative Affairs, Department of Homeland Security.

The passage of the bill was welcomed by Indian professionals from across the country, particularly in the Silicon Valley in California, Seattle area in Washington state, the Greater Washington DC area and the tri-State area of New York, New Jersey and Connecticut.

Top American IT companies also welcomed the passage of the bill and urged the Senate to pass it at earliest.

The bill which was championed by Sunayana Dumala, the wife of Indian engineer Srinivas Kuchibhotla who was shot dead in a restaurant in Olathe, Kansas, in February 2017, said that it was an important day and “a moment we have been waiting for years. Finally, our hard work and tireless efforts have come into fruition,” the Kansas City Star reported.

Dumala made multiple visits to Washington to promote the legislation. “After the tragic murder of my husband, Srinivas Kuchibhotla, I lost my status to stay in the country and the immigration struggle took over my grief,” Dumala said in a statement .