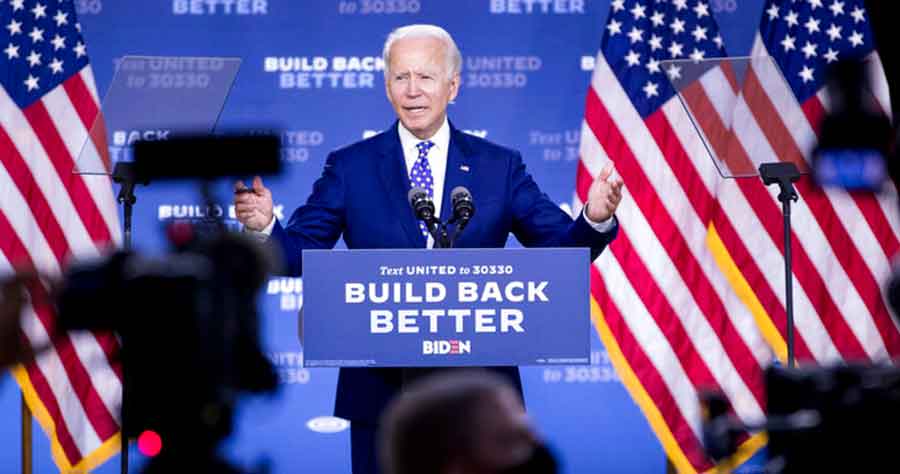 Joseph R. Biden Jr. unveiled wide-ranging plans on Tuesday to address systemic racism in the nation’s economy, saying this year’s election was about “understanding people’s struggles” and pledging to tear down barriers for minority-owned businesses.

In an address near his home in Wilmington, Biden made the argument that racial justice is central to his overall policy vision in areas like housing, infrastructure and support for small businesses, while aiming to draw a stark contrast with a President who has regularly inflamed racial tensions.

“This election is not just about voting against Donald Trump,” Biden said, standing before four American flags in a community centre gym. “It’s about rising to this moment of crisis, understanding people’s struggles and building a future worthy of their courage and their ambition to overcome.”

Biden’s plan is the fourth piece of his “Build Back Better” proposal, an economic agenda that also encompasses manufacturing, climate and infrastructure, and caregiving plans. It takes aim at Trump’s stewardship of the economy and his impact on working families, a potential vulnerability that has emerged during the coronavirus crisis.

The speech on Tuesday came with just under 100 days until Election Day, amid a searing national debate over racism in American society. Biden continues to hold a substantial lead over President Trump in national polls, and with each successive economic rollout, he has been trying to counter one of Trump’s enduring sources of voter support.

The plan fell short of some of the most ambitious proposals promoted by the Left wing of the Democratic Party. Biden, for instance, did not embrace reparations for slavery or endorse “baby bonds”, a government-run savings programme for children championed during the primary by Senator Cory Booker of New Jersey.

Campaign officials said Biden had not ruled out eventually accepting such a plan, and that he was not opposed to a study of reparations.

But the proposal he released on Tuesday did emphasise the importance of closing the racial wealth gap, and outlined multiple prescriptions for doing so.

Biden laid out plans for a small-business opportunity fund to help make capital available to minority business owners, and he proposed to triple the goal for awarding federal contracts to small disadvantaged businesses, to at least 15 percent of the money doled out from 5 per cent.

The plan also seeks to improve the opportunity zone programme that was created as part of the 2017 tax overhaul.

“In good times, communities of colour still lag,” Biden said. “In bad times, they get hit first, and the hardest. And in recovery, they take the longest to bounce back. This is about justice.”