Interested in who takes the White House? Keep your eyes peeled 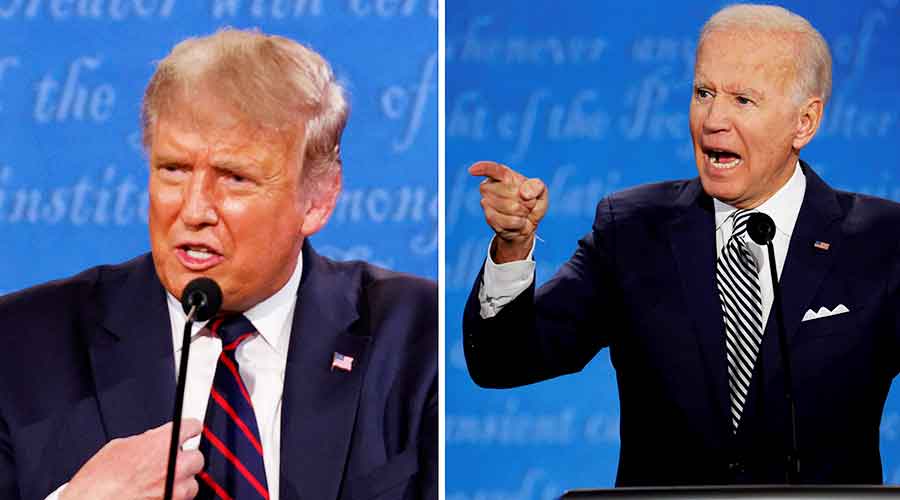 There are more bad omens for Trump. The white working class, which shifted from Obama to Trump, likes Biden more than Hillary. The elderly support for Trump is waning.
Sourced by The Telegraph
Saurabh Jha   |   Philadelphia   |   Published 01.11.20, 01:04 AM

If the US presidential elections were best-of-three set tennis matches, Joe Biden, the Democrat challenger, would have won 2-1. Biden took the first set because of Donald Trump’s inconsistent messaging about Covid-19. In June, protests erupted nationally because yet another African-American male was killed by the police. The Left wanted the police defunded. Trump, capitalising on the riots that accompanied the peaceful protests, raised law and order concerns. Trump equalised.

Biden retook the lead in September as Covid-19 cases rose and Trump deflected responsibility and minimised the pandemic’s harms. Lately, Trump has inched back. His messaging was more en pointe in the final debate. Hunter Biden’s business dealings with the Ukrainians and Chinese during his father’s tenure as Vice-President, discovered on his abandoned laptop, wouldn’t have hurt Biden much, as the country is now tired of corruption allegations. But Twitter made the story needlessly salacious by censoring it.

2016 was the year polling died. Trump emerged with mysterious powers over probability and statistics. Will 2020 be 2016 redux? Depends on who you ask because the answer depends on who they support. Neither side is willing to surrender optimism to chance. Biden supporters say 2020 is different. Trump no longer is an outsider to whom people blindly throw the mantle. Fewer voters are undecided. And notwithstanding Hunter Biden’s laptop, no last-minute electoral surprises await Biden.

There are more bad omens for Trump. The white working class, which shifted from Obama to Trump, likes Biden more than Hillary. The elderly support for Trump is waning. Suburban mothers — the constituency traditionally most concerned about law and order, which is Trump’s trump card — find him less of that lovable rogue of 2016.

The electoral algebra is precariously balanced as there are shifts to Trump, too. His support has risen in the African-American community, likely because their unemployment, pre-pandemic, dropped significantly. Trump started prison reform, reversing the systemic disadvantage this community faced from the criminal justice system.

Some “never Trumpers”, conservatives who didn’t vote for him in 2016 because of his crass bombast, are grudgingly voting for him in 2020 because they fear Biden, likeable as he is, will be manipulated by the hardline Left. They fear that Democrats will increase the Supreme Court’s size and pack it with justices partial to liberal ideologies. The electoral size of the never Trumpers is difficult estimating because some claim to detest Trump just for public credibility. Polling errors aren’t random. They systematically underestimate Trump’s support because many fear confessing their support, even to anonymous pollsters. Polls have a sampling problem too as Trump supporters are less likely to answer pollsters’ phone calls.

Since 2016, Trump’s detractors detest him more and his supporters adore him more. The accentuation of bipolar emotion testifies both the President’s divisiveness and the proletariat’s divisibility. Most Americans don’t change party allegiances. Elections are decided by the undecideds, the independents, in swing states such as Pennsylvania, where the number of undecideds is sufficient to tilt scales. Even amongst the undecideds there are shades of indecisiveness. A vanishingly small number is genuinely independent.

Elections are decided by those who can be bothered to vote. Trump’s supporters are more energetic. Trump’s rallies are like rock concerts. Biden’s rallies in contrast are like studious university lectures on macroeconomics. This is partly because Democrats are avoiding large crowds in view of the pandemic. But Trump has been campaigning more tirelessly and further afield than Biden. Ordinarily, this would mean Trump’s supporters have a higher turnout on election day. Advantage Trump. But another twist in this election is the mail-in-vote. Fifty million have already been cast, which theoretically shouldn’t affect either side but robs Trump’s last-minute sprint of its winds. Advantage Biden.

If Trump wins, protests will again become riots in many cities. If Biden wins, Trump’s hardcore base will become unhinged. Culture wars have always animated American politics but 2020 is different. Privileged Americans are having an epic identity crisis, believing the country is morally defunct because the legacies of slavery and racism still run through its veins. One side believes racism is the country’s biggest problem. Each side on this culture divide thinks electing the other side will be apocalyptic.

Not everyone cares about the culture wars. The aam aadmi wants back the pre-pandemic good life. People are both afraid of the coronavirus and fatigued by the lockdown. The electoral equation isn’t simply a battle between fatigue and fear but whether people think Trump or Biden will lead them out of the pandemic. Arguably, those who fear the virus are more likely to trust Biden. Those fatigued by the lockdown may trust neither.

In 2016, Trump won Pennsylvania by 44,292 votes, a difference of merely 0.72 per cent. Very small margins are needed to win; it’s like the difference between being caught at the boundary and clearing the ropes for a six. Only fools would predict the outcome with confidence. The only thing that can be said with certainty is that this election won’t be a dice roll but a coin toss.

India: modest goals in US