The talks in Doha lasted longer than planned and both sides publicly reported progress, which is a rarity 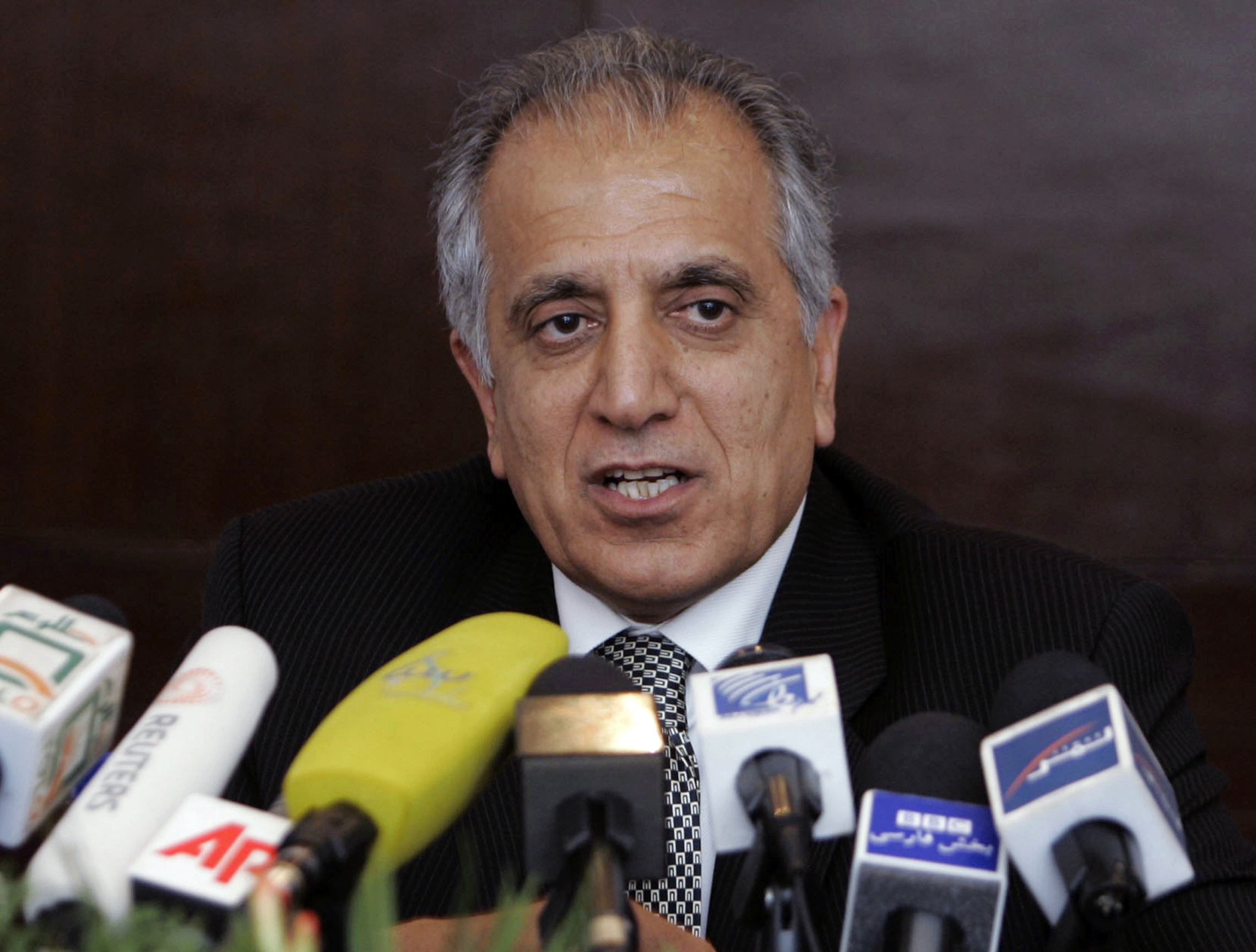 In this March 13, 2009, file photo, Zalmay Khalilzad, special adviser on reconciliation, speaks during a news conference in Kabul. Khalilzad said on Saturday that "significant progress" was made during lengthy talks with the Taliban in Qatar.
AP
Rod Nordland And Mujib Mashal/The New York Times   |     |   Published 27.01.19, 09:10 AM

The US and the Taliban are closing in on a deal to end America's longest war after six days of some of the most serious Afghan peace negotiations to date wrapped up on Saturday.

The talks in Doha, Qatar, lasted much longer than planned and longer than any previous attempt to end the 17-year conflict, and both sides publicly reported progress — a rarity. The chief American negotiator, Zalmay Khalilzad, said on Twitter that the talks were “more productive than they have been in the past” and he hoped they would resume shortly.

He also said he was flying to the Afghan capital, Kabul, for consultations with the government.

“We have a number of issues left to work out. Nothing is agreed until everything is agreed, and ‘everything’ must include an intra-Afghan dialogue and comprehensive cease-fire,” he said.

Khalilzad’s comments suggested that the key sticking points were the terms of a Taliban ceasefire and getting the insurgents to give up their long-standing refusal to speak to the Afghan government, which they deride as an American puppet.

Still, this is the first time in nine years of intermittent peace efforts that all sides seem serious about reaching a deal that, in the first phase, would exchange a Taliban ceasefire for a phased withdrawal of US forces. The Taliban would also pledge not to allow international terror groups to use Afghanistan as a launching pad for attacks against the US.

Then the Afghans and the Taliban would need to detail exactly what the peace will look like in terms of the Taliban sharing power in government and how that might affect an array of other issues, such as the status of women in the country.

“Since the United States started to engage the Taliban, this by far is the closest to a deal,” said Hekmat Khalil Karzai, a former Afghan deputy foreign minister who leads the Center for Conflict and Peace Studies and has been involved in the peace efforts for years.

Secretary of state Mike Pompeo said on Twitter that the news from Doha was encouraging and that the US was serious about pursuing peace.

Karzai said the American side had shown that seriousness by beginning an effort that includes not only extensive meetings with the Taliban, but also outreach to all regional actors and stakeholders, such as Pakistan, Russia and China, to cooperate.

“I also see the resolve on the part of the Taliban,” he said. “I see that they are moving beyond the standard rhetoric, that they are not only engaging but seem committed to a political settlement.”

The Taliban signalled their own belief in the importance of the talks by appointing one of their most powerful officials, Mullah Abdul Ghani Baradar, as the chief peace negotiator, on the fourth day.

As the talks stretched on, Khalilzad was said to have repeatedly delayed his flight to Kabul, where he was expected to explain the deal to President Ashraf Ghani, whose government has so far been excluded.

Late Saturday, Taliban spokesman Zabihullah Mujahid reiterated the insurgents’ long-standing position. “Until the issue of withdrawal of foreign forces from Afghanistan is agreed upon,” he said, “progress in other issues is impossible.”

But Mujahid said progress was made on a withdrawal, and he emphasized that the insurgents still wanted to negotiate.

“Since these issues are critical and need comprehensive discussion, it was decided that talks about unsolved matters will resume in similar future meetings,” he added.

The basic outlines of the emerging deal have leaked out through Taliban sources. U.S. officials have been tight-lipped by comparison, though Western diplomats tacitly confirmed those outlines.

The Americans would promise to withdraw their 14,000 troops, and the Taliban would agree to never again allow their territory to be used by extremists like al Qaida, the terrorist network that staged the 2001 attacks on the US from Afghanistan and set off the start of the war.

That much seemed in agreement. But as always, the devil is in the details. How long would the ceasefire be, and would it start before, after or even during the American withdrawal? How long a time frame would the withdrawal cover? All of these questions are potential deal breakers.

Taliban sources remained optimistic, even as western diplomats expressed concern that there would not be a deal from this round of talks. On Saturday afternoon, Sayed Akbar Agha, a former Taliban official who now lives in Kabul but keeps close contacts with insurgent leaders, said he had just spoken to them.

“I have been told that talks are going ahead very well and we are close to an agreement,” he said. Whatever the result this time, Agha said, “Afghanistan was never so close to peace in these past years. What is happening now has never happened before.”

After nearly two decades of a war that has cost tens of thousands of lives and hundreds of billions of dollars, President Donald Trump has made clear his distaste for a continued role in Afghanistan. In December, he detailed the withdrawal of half the 14,000 US troops in the coming months.

That was before Khalilzad, an Afghan-American and former ambassador to Afghanistan, had even begun the latest round of direct negotiations with the Taliban, which started Monday and were initially expected to last only a couple days, as previous sessions had.

Afghan truces up to now have come and gone, and most observers do not believe the Afghan military can stand against the Taliban without US support. Once the Americans leave, who would guarantee any truce?

Ryan Crocker, a former US ambassador to Afghanistan, said it was a rush for the exits.

'I can't see this as anything more than an effort to put lipstick on what will be a U.S. withdrawal,” he said. Crocker said it reminded him of the Paris peace talks on Vietnam.

“By going to the table, we basically were telling the North Vietnamese and Viet Cong, ‘We surrender. We’re here just to work out the terms.’ I just cannot see this getting to any better place. We don’t have a whole lot of leverage here.”

In the coming days, there will be much discussion of whether the Americans seem ready to give up too much or the Taliban too little. But no one can gainsay the historic importance of this first step.

It will be months or even years before a final peace settlement is reached, but this is the first time there has been actual progress toward the prospect of peace; all earlier efforts to even start talks had failed.

The human cost has been high: 2,419 American lives; 1,142 allied lives; at least 62,000 Afghan military and police lives, and possibly as many Taliban lives; more than 14,000 civilian lives over the past decade; and at least twice those numbers on all sides wounded and maimed, many for life.

The expense was also enormous. The US alone has spent $932 billion since 2001 in Afghanistan; its allies and international agencies, many billions more.

Many policymakers — and most Americans — have long agreed that it is time to get out of Afghanistan and hand matters over to the Afghans. The question now is whether that will cost the Afghan government control over the country.

“This isn’t anything other than a way out for us that we can style as something less than losing the war,” Crocker said.

Any peace deal acceptable to the West and the Afghan government would mean recognising the fundamentals of the Afghan Constitution — guaranteeing civil rights that conflict with the Taliban’s interpretation of the Shariah, especially where the rights of women are concerned. Scrapping that Constitution would be regarded by many world leaders as a red line that could not be crossed.

But the Taliban are unapologetically anti-democratic, believing in an outsize role for the mullahs in governance. Reconciling those two worldviews seems almost impossible, but somehow the shape of an eventual settlement requires just that.

Ghani did not criticise the US-led talks, as he had previously, but pointedly reminded everyone that Khalilzad’s mission was to persuade the Taliban to sit down with the Afghan government. Khalilzad was expected to brief Ghani before announcing any deal.

Nearly everything beyond the basic outlines of the agreement is still on the negotiating table — even the table itself.

Will the Taliban sit down for face-to-face talks with the Afghan government? Will there be a residual force of American or other foreign troops, to guard the US embassy or international facilities, for instance? And what sort of power-sharing arrangement could there be? Will the Taliban be able to field candidates in presidential, provincial and district elections scheduled for July of this year?

Interviewed by CNN’s Fareed Zakaria at the World Economic Forum in Davos, Switzerland, as the talks went on, Ghani declined to describe the developments in Doha as a breakthrough and said that difficult negotiations lay ahead. “Peace is an imperative. A war that has gone on for 17 years must come to an end,” he said.

The US peace envoy, Khalilzad, said he “will build on the momentum and resume talks shortly”, but did not specify when. That would likely entail another round of talks between the Americans and the Taliban, until the insurgents change their position on talking to the Afghan government.