So far, leaders of France, Israel, Turkey and Germany have hit the stone wall of President Vladimir Putin’s refusal to engage in any serious negotiation 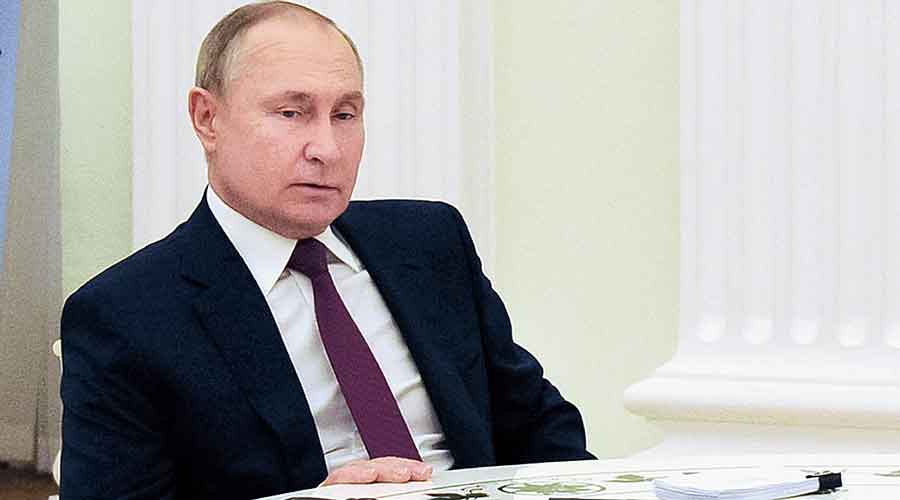 The US accurately predicted the start of the war in Ukraine, sounding the alarm that an invasion was imminent despite Moscow’s denials and Europe’s scepticism. Predicting how it might end is proving far more difficult.

There are three separate back-channel efforts underway to start negotiations — by the leaders of France; Israel and Turkey; and, in a recent entree, the new chancellor of Germany. But so far, all have hit the stone wall of President Putin’s refusal to engage in any serious negotiation.

At the Pentagon, there are models of a slogging conflict that brings more needless death and destruction to a nascent European democracy, and others in which Putin settles for what some believe was his original objective: seizing a broad swath of the south and east, connecting Russia by land to Crimea, which he annexed in 2014.

And there is a more terrifying endgame, in which Nato nations get sucked more directly into the conflict, by accident or design. That possibility became more vivid on Sunday, when Russian missiles landed in Ukraine’s western reaches, an area unscathed until now by the 18-day-old conflict, about a dozen miles from the Polish border.

Russia declared over the weekend that continued efforts to funnel weapons through that region to the Ukrainian forces would make the convoys “legitimate targets”, a warning that just because the weapons are being massed on Nato territory does not mean they are immune from attack.

In interviews with senior American and European officials in recent days, there is a consensus on one point: Just as the last two weeks revealed that Russia’s vaunted military faltered in its invasion plan, the next two or three may reveal whether Ukraine can survive as a state, and negotiate an end to the war. So far even the most basic progress, such as establishing safe humanitarian corridors, has proved elusive.

And now, what troubles officials is that Putin may double down and expand the fight beyond Ukraine.

In private, officials express concern that Putin might seek to take Moldova, another former Soviet republic that has never joined Nato and is considered particularly vulnerable. There is renewed apprehension about Georgia, which fought a war with Russia in 2008 that today seems like a test run for the far larger conflict playing out.

And there is the possibility that Putin, angered by the slowness of his offensive in Ukraine, may reach for other weapons: chemical, biological, nuclear and cyber.

Jake Sullivan, Biden’s national security adviser, mentioned that scenario on Sunday, appearing on CBS’s Face the Nation. “Part of the reason why Putin is resorting to the possibility of extreme tactics like the use of chemical weapons is because he’s frustrated because his forces aren’t advancing,” he said.

Sullivan said that Russia would suffer “severe consequences” if it used chemical weapons, without specifying what those would be. He sidestepped the question of how Biden would react.

So far he has said the only thing that would bring the US and its allies directly into the war would be an attack on Nato nations.

Quietly, the White House and the senior American military leadership have been modelling how they would respond to a series of escalations, including major cyberattacks on US financial institutions and the use of a tactical or “battlefield” nuclear weapon by Putin to signal to the rest of the world that he would brook no interference as he moves to crush Ukraine.

Even with Ukrainians begging for offensive weapons, Biden has stuck to his determination that he will not directly engage the forces of a nuclear-armed superpower.