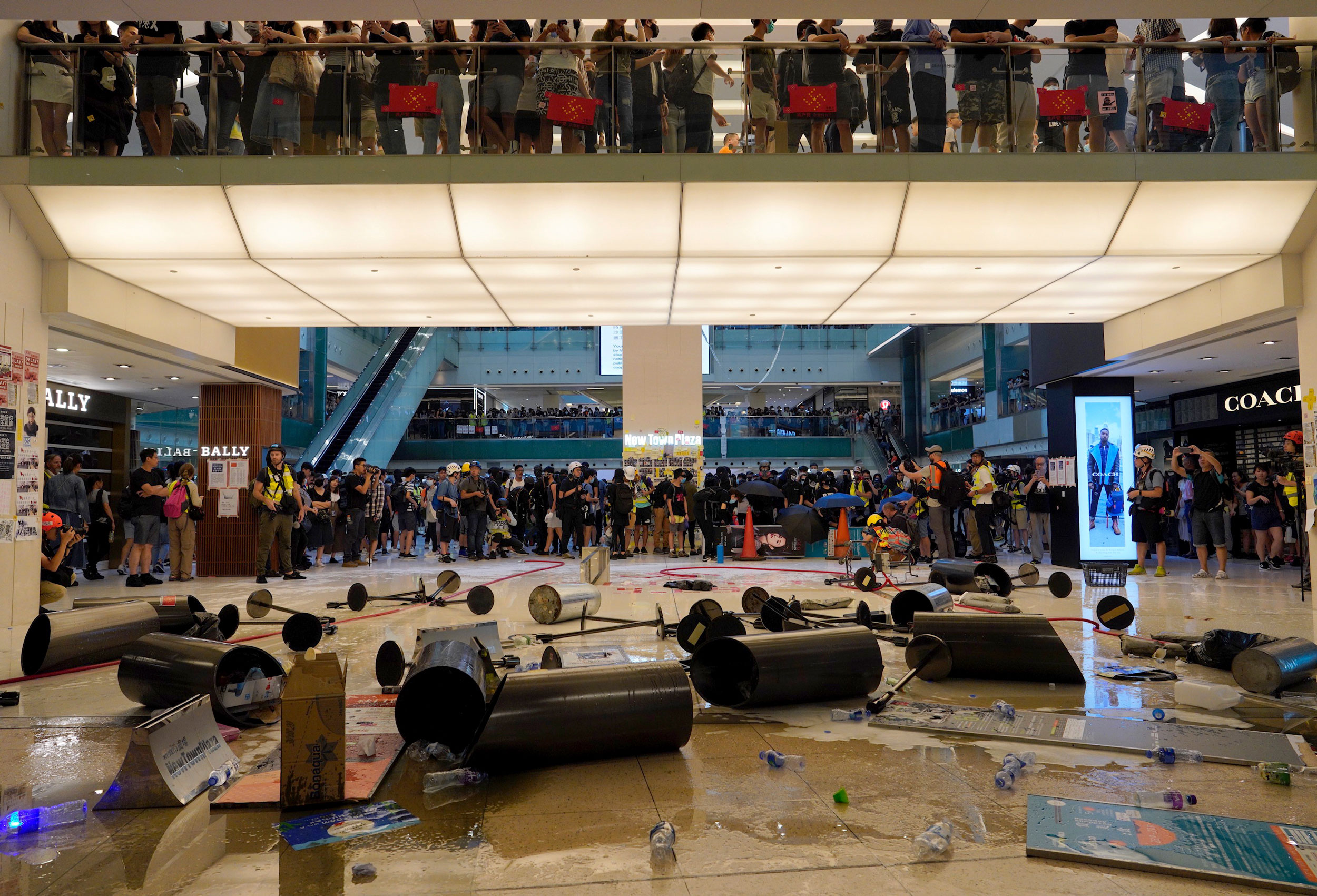 The Hong Kong police arrested two 13-year-olds on the fringes of anti-government demonstrations over the weekend, including a girl accused of burning a Chinese national flag, the authorities said on Sunday.

The arrests on Saturday appear to be further signals that the local police are taking an increasingly hard line against the pro-democracy demonstrators who have roiled the city for three and a half months.

Protesters have taken to destroying symbols of Chinese state authority, including flags, in recent months, but the latest arrest comes less than two weeks before October 1, the foremost political holiday in the Chinese calendar and one which Beijing takes pains to ensure is celebrated without incident.

The arrests came amid a weekend of protests. On Sunday, demonstrators vandalised a shopping mall. Some protesters there stomped on and spray-painted a Chinese flag. The police said protesters damaged a nearby subway station.

The two minors were arrested on Saturday during a long day of street clashes in which protesters threw bricks and firebombs and the police fired multiple rounds of tear gas in Yuen Long, a satellite town near Hong Kong’s border with the Chinese mainland.

The police said protesters had at one point on Saturday used “hard objects” to attack an officer who was conducting an arrest and attempted to steal his revolver. Television footage from Yuen Long also showed protesters assaulting at least two unarmed men.

A group of masked protesters was seen burning a Chinese flag in broad daylight on Saturday during a police-approved march through the Tuen Mun district of northwestern Hong Kong, a few miles from Yuen Long.

The police later said that a 13-year-old girl had been arrested that night on suspicion of “desecrating the national flag” in Tuen Mun. She was held in detention overnight and released on bail by Sunday afternoon.

On Sunday, local television news stations broadcast protesters stomping on a Chinese flag and spraying it with black paint before dumping it in a river during a pro-democracy rally at a shopping mall in northern Hong Kong.

A local ordinance says that people convicted of desecrating the Chinese flag in Hong Kong by “publicly and wilfully burning, mutilating, scrawling on, defiling or trampling on it” face a fine of nearly $6,400 and imprisonment for up to three years.

Under Hong Kong law, children are defined as being under 14 years of age. Those 10 or older can be found guilty of committing crimes, but no one younger than 14 can be sentenced to prison.

The October 1 holiday will commemorate the 70th anniversary of the founding of the People’s Republic of China under the Communist Party.

Beijing does not want anything to mar the occasion, but the protesters plan to do just that. They have called for a day of protests to pressure the local government to meet their demands for political reforms, police accountability and universal suffrage.

The protesters are also venting anger with what they see as the steady erosion of the freedoms that Hong Kongers enjoy under a “one country, two systems” arrangement that has governed the former British colony since its return to Chinese control in 1997.

The police said on Sunday that they had also arrested a 13-year-old boy on Saturday in the Tseung Kwan O neighborhood of eastern Hong Kong. The boy was arrested on suspicion of unlawful assembly and of possessing “instruments fit for unlawful purposes.”

In a statement, the police said the boy had been carrying spray-paint and “laser guns,” the authorities’ term for the laser pens that many protesters have used this summer to annoy officers.

Edith Leung, an officer in one of Hong Kong’s pro-democracy political parties, posted a video on Facebook that she said showed the boy being led away by police. The footage shows police leading away a boy — who wears a white T-shirt black shorts and sneakers — as bystanders shout “Corrupt cops!”

Ryan Ho, 20, a university student who attended a protest in Hong Kong on Sunday, said that in his experience, Hong Kong police officers tend to “snatch” a disproportionate number of younger people, especially secondary school students, while making arrests at protests.

“It just so happens that they are more vulnerable and less resistant,” he said.