Turkey steps up pressure on Saudi Arabia over missing writer

The kingdom calls the allegation 'baseless' 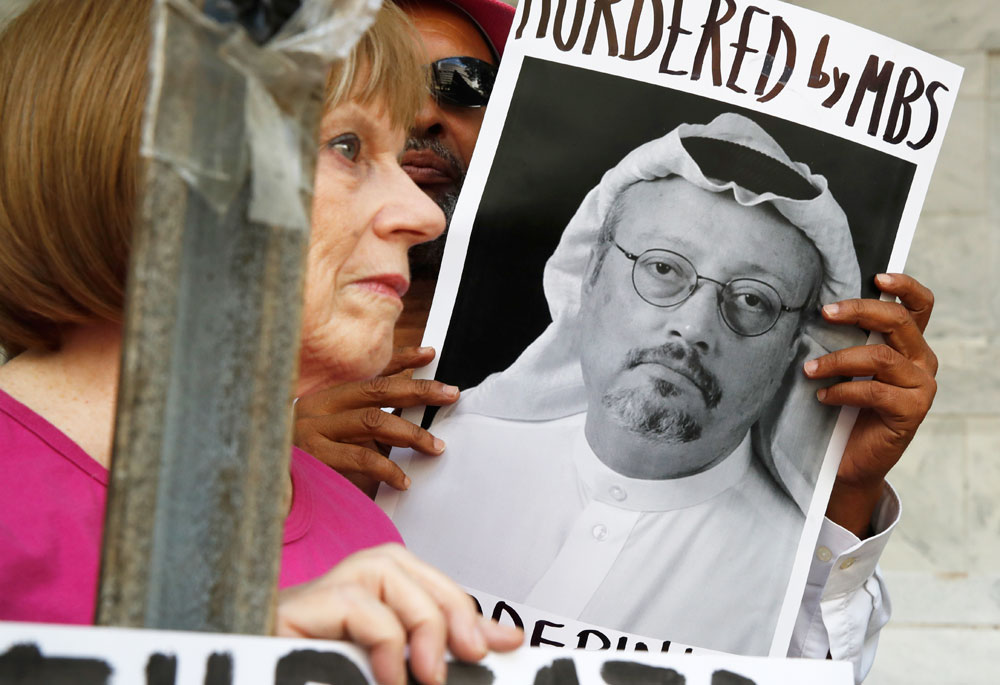 People hold signs during a protest at the Embassy of Saudi Arabia about the disappearance of Saudi journalist Jamal Khashoggi on Wednesday, Oct. in Washington.
(AP Photo/Jacquelyn Martin)
AP   |   Istanbul   |   Published 11.10.18, 10:00 AM

Recep Tayyip Erdogan's comments appear aimed at slowly intensifying the criticism while balancing the need to maintain the kingdom's investments in Turkey and relations on other issues.

Turkish officials fear Khashoggi was killed by the Saudis after walking into the kingdom's consulate in Istanbul on October 2, though they haven't offered any evidence to support that.

The kingdom calls the allegation 'baseless,' but has not offered any evidence to explain why Khashoggi simply walked out of the consulate and disappeared though his fiancée waited outside for him.

Erdogan was quoted by Turkish media on Thursday as telling journalists flying with him back home from a visit to Hungary that 'we cannot remain silent to such an incident.'

'How is it possible for a consulate, an embassy not to have security camera systems? Is it possible for the Saudi Arabian consulate where the incident occurred not to have camera systems?' Erdogan asked. 'If a bird flew, if a mosquito appeared, these systems would catch them and (I believe) they (the Saudis) would have the most advanced of systems.'

Meanwhile, Trump told reporters in the Oval Office that he has a call in to Khashoggi's fiancee, Hatice Cengiz, who has appealed to the president and first lady Melania Trump for help.

Trump said he had spoken with the Saudis about what he called a 'bad situation,' but he did not disclose details of his conversations. He also said the U.S. was working 'very closely' with Turkey, 'and I think we'll get to the bottom of it.'

Secretary of State Mike Pompeo then had a follow-up call with the crown prince to reiterate the US request for information and a thorough, transparent investigation.

In an interview later Wednesday with 'Fox News @ Night,' Trump said he wanted to find out what happened to Khashoggi but appeared reluctant to consider blocking arms sales, citing economic reasons.

'I think that would be hurting us,' Trump said. 'We have jobs, we have a lot of things happening in this country. We have a country that's doing probably better economically than it's ever done before.'

'Part of that is what we're doing with our defense systems and everybody's wanting them,' he continued. 'And frankly, I think that that would be a very, very tough pill to swallow for our country. I mean, you're affecting us and, you know, they're always quick to jump that way.'

On his first international trip as president, Trump visited Saudi Arabia and announced $110 billion in proposed arms sales. The administration also relies on Saudi support for its Middle East agenda to counter Iranian influence, fight extremism and support an expected peace plan between Israel and the Palestinians.

Khashoggi had gone to the consulate in Istanbul on October 2 to get paperwork he needed for his upcoming marriage while his Turkish fiancee waited outside.

The Washington Post reported Wednesday evening that US intelligence intercepts outlined a Saudi plan to detain Khashoggi. The Post, citing anonymous US officials familiar with the intelligence, said Saudi Crown Prince Mohammed bin Salman ordered an operation to lure Khashoggi from his home in Virginia, where he lived most recently, to Saudi Arabia and then detain him.