Roger Stone was convicted of impeding an inquiry that threatened President 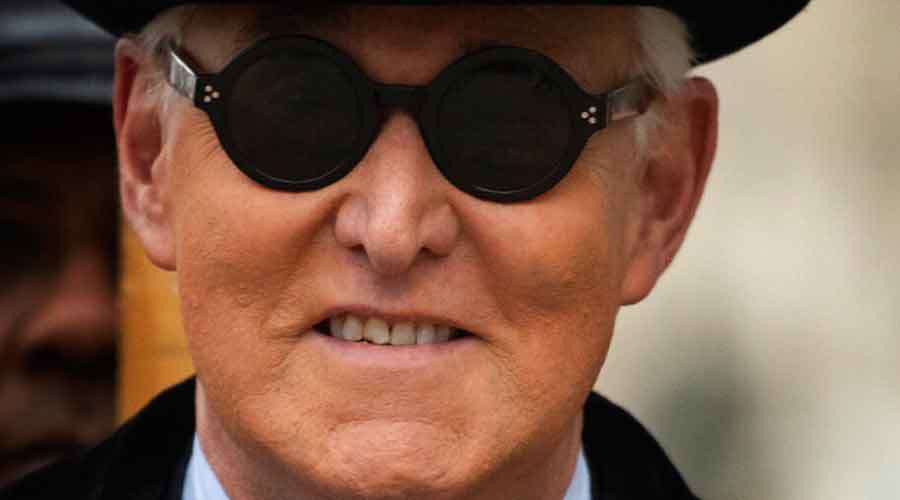 In this February 2020 photo, Roger Stone arrives for his sentencing at a federal court in Washington
AP
Peter Baker, Maggie Haberman And Sharon LaFraniere   |   Washington   |   Published 12.07.20, 04:08 AM

President Trump commuted the sentence of his longtime friend Roger J. Stone Jr on seven felony crimes on Friday, using the power of his office to spare a former campaign adviser days before Stone was to report to a federal prison to serve a 40-month term.

In a lengthy written statement punctuated by the sort of inflammatory language and angry grievances characteristic of the President’s Twitter feed, the White House denounced the “overzealous prosecutors” who convicted Stone on “process-based charges” stemming from the “witch hunts” and “Russia hoax” investigation.

The statement did not assert that Stone was innocent of the false statements and obstruction counts, only that he should not have been pursued because prosecutors ultimately filed no charges of an underlying conspiracy between  Trump’s campaign and Russia.

“Roger Stone has already suffered greatly,” it said. “He was treated very unfairly, as were many others in this case. Roger Stone is now a free man!”

The commutation, announced late on a Friday, when potentially damaging news is often released, was the latest action by the Trump administration upending the justice system to help the President’s convicted friends. The justice department moved in May to dismiss its own criminal case against Trump’s former national security adviser Michael T. Flynn, who had pleaded guilty to lying to the FBI.

And last month,  Trump fired Geoffrey S. Berman, the US attorney whose office prosecuted Michael D. Cohen, the President’s former personal lawyer, and has been investigating Rudolph W. Giuliani, another of his lawyers.

Democrats quickly condemned the President’s decision, characterising it as an abuse of the rule of law.

“With this commutation, Trump makes clear that there are two systems of justice in America: one for his criminal friends, and one for everyone else,” said Representative Adam B. Schiff, Democrat of California and a leader of the drive to impeach Trump last year for pressuring Ukraine to incriminate his domestic rivals.

Two House committee chairmen quickly announced that they would investigate the circumstances of the commutation, suggesting that it was a reward for Stone’s silence protecting the President.

“No other President has exercised the clemency power for such a patently personal and self-serving purpose,” said a statement issued by Representatives Jerrold Nadler and Carolyn B. Maloney, both New York Democrats.

Stone, 67, a longtime Republican operative, was convicted of obstructing a congressional investigation into Trump’s 2016 campaign and possible ties to Russia. Prosecutors convinced jurors that he lied under oath, withheld a trove of documents and threatened an associate with harm if he cooperated with congressional investigators.

Stone maintained his innocence and claimed prosecutors wanted him to offer information about Trump that he said did not exist.

As his time to report to prison neared, Stone openly lobbied for clemency, maintaining that he could die in prison and emphasising that he had stayed loyal to the President rather than help investigators.

“He knows I was under enormous pressure to turn on him,” Stone told the journalist Howard Fineman on Friday shortly before the announcement. “It would have eased my situation considerably. But I didn’t.”