Public queue up to pay respects to Queen Lying-in-State

Within hours of the Lying-in-State ceremony opening to public on Wednesday evening, the queue was said to be over 4-km-long winding around the river Thames 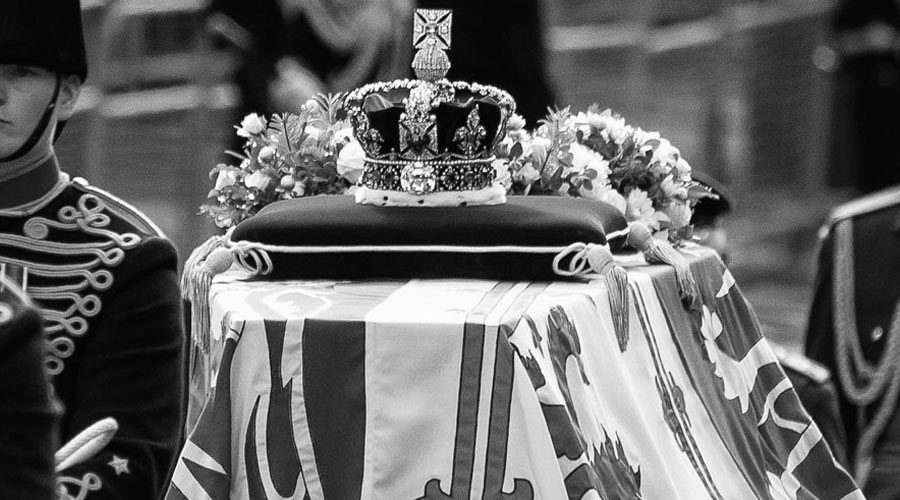 The ancient ceremony of Lying-in-State, dating back to the 19th century, involves the coffin resting on a raised platform called catafalque in the middle of Westminster Hall as members of the queuing public are allowed in to walk briskly past.
Twitter / @KensingtonRoyal
Aditi Khanna   |   London   |   Published 15.09.22, 10:39 AM

One of the biggest logistical events ever witnessed in London is underway on Thursday as the first few thousand members of the public file past the coffin of Queen Elizabeth II, Lying-in-State at Westminster Hall in the Houses of Parliament complex in the heart of the UK capital.

A week since the 96-year-old monarch died peacefully at her Scottish summer residence of Balmoral Castle, her coffin has been part of a historic journey by road and air until it was conveyed in a grand procession from Buckingham Palace to lie in state in the historic hall within the Palace of Westminster.

King Charles III was joined by sons Princes William and Harry in the ceremonial procession on Wednesday behind the coffin placed on a horse-drawn gun carriage as it made its way through the streets of central London, lined with thousands of mourners. Heathrow Airport had changed flight schedules to ensure there was silence during the 40-minute procession, with only the sound of gun salutes and Big Ben chimes in honour of the late monarch.

The coffin was draped with the Royal Standard on which was placed the diamond-encrusted Imperial State Crown on a purple velvet cushion and a wreath of flowers made up of white roses and foliage from the gardens at Windsor Castle.

"Let not your heart be troubled: ye believe in God, believe also in me. In my Father's house are many mansions: if it were not so, I would have told you," read Reverend Justin Welby, the Archbishop of Canterbury, from the Bible.

The ancient ceremony of Lying-in-State, dating back to the 19th century, involves the coffin resting on a raised platform called catafalque in the middle of Westminster Hall as members of the queuing public are allowed in to walk briskly past.

After the short service, the captain of the Queen's Company 1st Battalion Grenadier Guards, assisted by a senior sergeant, laid the royal standard of the regiment on the steps of the catafalque.

Four officers from the Household Cavalry began the vigil, taking their places at each corner and bowing their heads. Besides the changing of this guard of four, which takes place every 20 minutes, there is pin-drop silence inside the 900-year-old Westminster Hall where members of Parliament, peers, military veterans and others have been filing past.

Since the Lying-in-State ceremony opened to the public at 5pm local time on Wednesday evening, the queue has been around 4-km-long winding around the River Thames.

According to the Department of Digital, Media and Sports (DCMS), which is coordinating the logistical aspect of the ceremony, the queue would not be allowed to get any longer than 16 kilometres and has alerted mourners of an estimated 30-hour overnight wait to get to Westminster Hall.

The 24-hour round-the-clock process will remain open to the public until 6.30am local time on Monday, just hours before the funeral ceremony for Britain's longest-reigning monarch at Westminster Abbey at 11 am.

The BBC has been live streaming the Lying-in-State, which involves mourners from around the UK and even different parts of the world join a swiftly moving queue to walk through the hall, some pausing very briefly at the side of the coffin in reflection, a courtesy or in prayer.

Members of the royal family had private time with the coffin overnight on Tuesday, when the Queen spent her final night at her London residence of Buckingham Palace. Large screens had been set up in Hyde Park for those unable to gain access to the viewing spots along the procession route to Westminster Hall on Wednesday.

The next few days of the UK's state mourning will be focussed around the Lying-in-State as the new monarch continues his duties under Operation Spring Tide and makes a visit to Wales on Friday to complete his tour of all parts of the United Kingdom. Meanwhile, the King will also hold audiences with British Prime Minister Liz Truss and other senior officials related to the preparations for the state funeral on Monday.

He has also been receiving phone calls from world leaders, including US President Joe Biden who spoke to the King on Wednesday to convey his condolences and recalled the Queen's kindness and hospitality" as she hosted him and First Lady Jill Biden at Windsor Castle in June.

Biden is among those expected at Monday's state funeral, with President Droupadi Murmu representing India along with around 500 world leaders including royalty and heads of state and government.