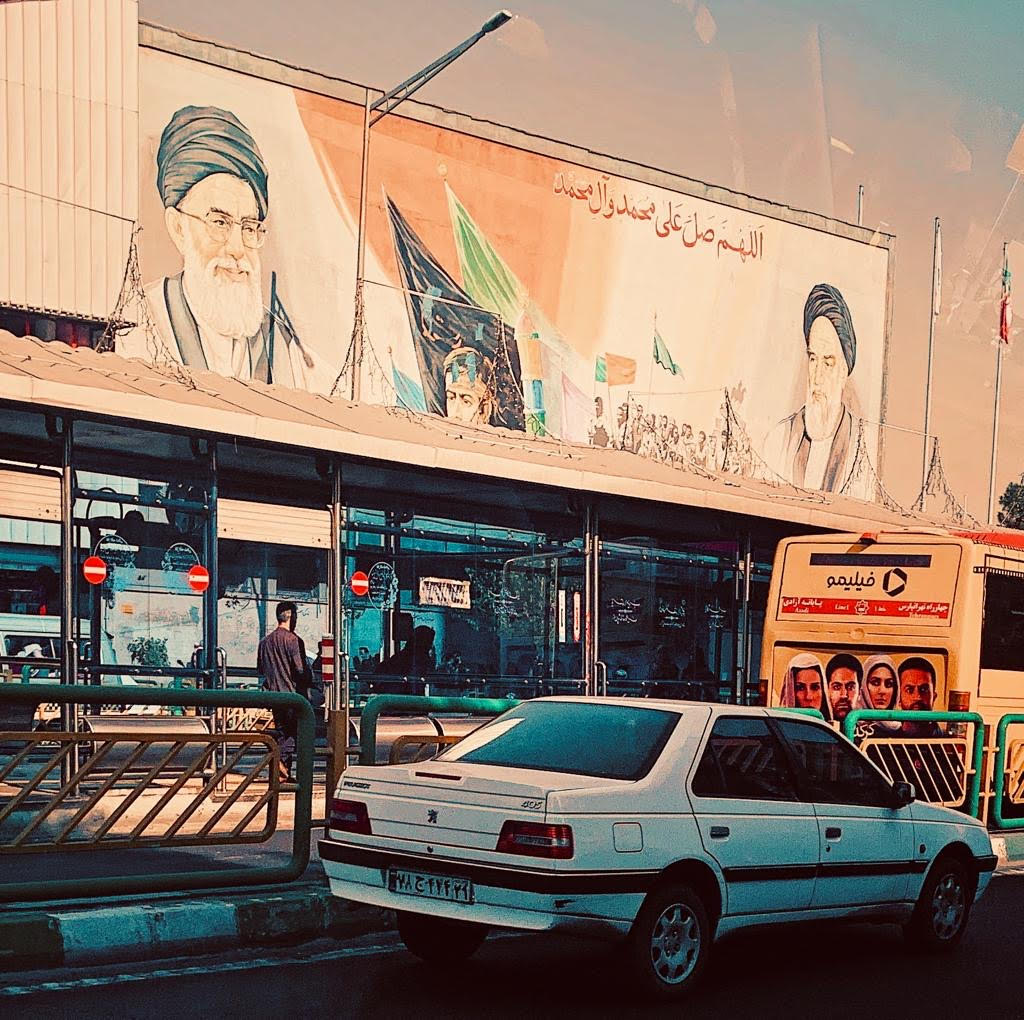 Portraits of Iranian Supreme Leader Ayatollah Ali Khamenei (L) and the late Ayatollah Ruhollah Khomeini (R), who in 1979 led an uprising that ousted the Shah of Iran, on a Tehran billboard
Penny MacRae
Tehran   |   Published 26.11.19, 01:40 PM

Cats are everywhere in Iran but man’s best friend is a rare sight on the streets. Police this year ordered a ban on walking dogs in public places like parks in the capital Tehran. Even transporting canines by car now is not allowed, and Tehran Police Chief Hossein Rahimi has warned that violators of the dog-walking law “shall be dealt with severely” without specifying the punishment. Rahimi also said that 'police will seriously confront dog owners who let their dogs ride in their cars.'

In Iran, the campaign against dogs is part of conservative Islamic authorities’ longstanding battle against “blind imitation of the vulgar culture of the West” that also includes periodic crackdowns on women’s attire and men’s “Westernised hairstyles.”

Tehran authorities have not banned dog-ownership altogether and the “no-walkies” prohibition for pooches is an order that some brave pet-owners flout. But in the space of a four-day visit to Tehran driving around the city of 8.7 million people, just two dogs -- a Cairn terrier and a German Shepherd -- were spotted on the lead with their owners. And on visits to other parts of the country, no pet dogs -- only a few strays running along highways -- were sighted.

Canines have been a disputed topic in Iran since the 1979 Islamic Revolution toppled the pro-western monarch, Shah Mohammad Reza Pahlavi. The revolution replaced the autocratic shah with a republic that’s nominally a democracy but one in which clerics call the shots. Underpinning Iran’s official hostility toward canines is the fact most religious scholars consider dogs to be “unclean”. People can own guard dogs but having them as household pets is very much frowned on. “Religiously speaking, wherever a dog sits or walks, we cannot pray,” Hamidreza Taraghi, a conservative Tehran politician, noted to the New York Times.

It’s dogs’ opposite number -- cats -- that are held in far higher regard by Iran and in much of the Muslim world. Much-loved felines are widespread in Iranian homes and people feed the stray cats that abound in the streets. “A lot of people have cats, but owning dogs -- that’s not really common,” said an Iranian government official who didn’t wish to be named.

Some religious hardliners regard even owning cats, though, as embracing Western values. (Nearly a decade ago, the Ministry of Culture and Islamic Guidance banned the media from publishing any advertisements for pets or pet-related products). But if Iranians are going to have any pets, felines are most likely to find official favour. Cats are preferred under Islamic tradition because Prophet Mohammed was said to be fond of felines and had a favourite cat, called Muezza, that he let rest on his lap when he gave sermons.

Critics of the religious scholars’ stance, however, note the disapproval of dogs doesn’t stem directly from the Koran, which contains several passages casting canines in quite a favourable light. Rather, it’s based on the Hadith, which are interpretations and analyses of the Koran. Scholars often point to an order given by Mohammad to 'kill all dogs.' The Prophet, though, issued the decree because of concern voiced by Medina’s governor about stray dogs running wild in the city. Mohammad later rescinded his “kill” order, declaring dogs to be one of Allah’s creatures and that only he who created dogs could dictate they should be wiped out.

There are no official estimates of the number of pet dogs in Iran, a country of 80 million people. But Petchi, an Iranian dog website that links dogs with professional dog-walkers -- an occupation that’s now threatened in Tehran with the new prohibition on pet-walking, estimates there are around 1.2 million pet dogs across Iran with some 350,000 of them in Tehran.

Iranian dog lovers say authorities’ hostility toward canines has a tendency to wax and also wane. Nine years ago, a senior Iranian cleric issued a fatwa saying that dogs were not to be kept as pets. Grand Ayatollah Naser Makarem Shiraz was quoted as telling local media at the time “there are lots of people in the west who love their dogs more than their wives and children”. In 2014, lawmakers proposed punishments ranging from small fines for owning a dog, to even administering 74 lashes for dog-owners caught walking their pets in public.

Right now, disapproval seems to be waxing. Iranian journalist and activist Masij Alinejad tweeted on November 13 a video showing a man telling an elderly woman it was wrong to bring a dog to the park and threatening if she did it again he’d “put the dog in a bag and take it away.” Alinejad added in her tweet “it’s not just women whose lives are controlled in Iran. Dogs suffer as well.” In Iran, the law requires women to wear modest 'Islamic' clothing. This obliges women to wear either a chador or at least a headscarf and short, light coat, known as manteau, that covers their arms.

Still, as is usual on most topics in Iran, people hold differing view on dogs. Even though they may be lying low for the moment, dog-lovers persist, especially among Iran’s urban middle class, known as the “dog demographic”. Many Iranians on social media have taken the side of dog-owners following the Tehran dog-walking ban. But some encounters over dogs have reportedly led to unfortunate consequences. Earlier this month, a Shia cleric, Abolhassan Kayhani from Iran’s Western Hamadan province, shown in media photos lying in a hospital bed, said he’d been knocked unconscious by a car driven by a woman dog-walker. He’d reproached the woman and her female companion for walking the dog in a park, they responded angrily and then fled into their car, hitting him in the process.

There are Iranian animal activists running stray dog shelters and even some municipalities have erected shelters. While Iran scored lowest on a seven-point scale for anti-cruelty animal measures on the World Animal Protection’s index, authorities are seeking to change that. A long-awaited animal protection bill has just been put before the Iranian Parliament to ban all cruelty to animals with violators facing possible prison terms, according to the English-language Tehran Times. The presentation of the bill, many years in the making, came after dozens of protesters and citizens rallied in front of Tehran municipal offices in August to condemn against brutal culling of stray dogs.