SECULARISM@50, PART 3: More dangerous than domestic communal sentiment is the searing impact that anti-Muslim statements and actions in India have on the Bangladesh ethos 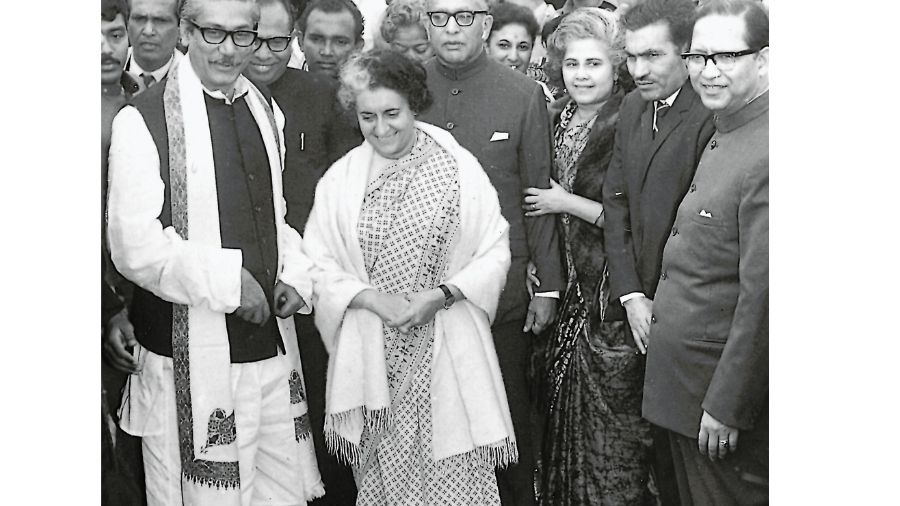 One eminent freedom fighter ruefully observes, “Our Pakistani past is behind us, but communal forces are still with us”.

However, he continues, “while secularism v/s religiosity is a problem, it is not a major problem.” This is by no means a universal conclusion. “Religiosity,” another argues, “is everywhere. Every nook and corner of society is increasingly religious.” Sitting at the window of a high-rise, another interlocutor asks me to look down on the street: Hijabs and even burkhas on most women. Men wearing prayer caps on their heads and long beards “as an outward sign of their devoutness.” “It was not like this,” he sighs, “even in pre-Liberation days”.

So widespread is this religiosity that every political party has had to adjust itself to this new reality. Even the Jama’at-e-Islami that was detested fifty years ago for siding with Pakistan is now an influential political force in its own right, as is the Tablighi Jama’at at whose annual gatherings it is obligatory for political leaders of all hues, including the ruling party, to foregather. The Jama’at-e-Isami is perceived as a leading mentor of the Bangladesh National Party. “While the elite values culture more than religion,” says one mature observer, “fundamentalism is stronger in rural areas.”

This was not always so. Bangladeshis used to point with pride to “secularism” having been incorporated in their Constitution long before India did the same. Kamal Hossein, in his book, “Bangladesh: Quest for Freedom and Justice” (UPL, Dhaka, 2013, p.142) points out that the Constitution elaborates that “the principle of secularism shall be realized by the elimination of – (a) communalism in all its forms; (b) granting by the State of political status in favour of any religion; (c) abuse of religion for political purposes; (d) discrimination against, or persecution of, persons practicing a particular religion”.

He also says Bangabandhu patiently explained to Gaddafi of Libya, “Our secularism is not against religion. Our secularism stands for harmony among members of all religions”. For that reason, Sheikh Hasina restored the secularism provisions of the Constitution after the military rulers had deleted these provisions. “The treatment of Hindus by the Awami League is not only a philosophical conviction but also a political compulsion,” says one authority.

Yet, says one Mohammad Mahmoodul Haque in an unpublished paper written in March 2021 that he presents to me, “secularism was overemphasized to please India by giving the 7% Hindus an upper hand in all matters” (sic). Proof? “The former Chief Justice was a Hindu, as are top positions of the judiciary, Bangladesh Bank, stock exchange, financial institutions, business houses, etc.” Instead of pride in this proof of inclusive nationalism, he is indignant that the Hindu minority should have a such an honoured place in the scheme of things. Communalism is clearly alive and kicking in 21st century Bangladesh.

Secularism is so fragile, I am told, that an Erdogan can easily overthrow it. There is many an Erdogan waiting in the wings. “Sensitivity to religious differences is declining”. Says another, “In rural Bangladesh, the moral atmosphere is set by the mullah. Under the influence of the Middle East, religiosity is on the increase”. Bangabandhu’s maxim that there can be “no compromise on secularism” is no longer the bottom line of governance. Sheikh Hasina has to adjust herself and her party to the new winds that are blowing.

“So, Hasina divides the religious opposition and rules by token appeasement of these forces”. Will such “strategic compromises” endure? That is the question that intellectuals are pondering with apprehension. One prominent politician who has won his spurs by being repeatedly elected is unequivocal, “We need strong secularism.

No political party should allow these forces to work”. That is easier said than done. The ground reality obliges parties to accommodate these non-secular forces, but like the proverbial Arab and his camel, there is the insistent danger that the communal camel will eventually push the Arab out of the secular tent.

More dangerous than domestic communal sentiment is the searing impact that anti-Muslim statements and actions in India have on the Bangladesh ethos. “We thought India would never leave the secular path,” says one bluntly outspoken editor, “but it has, which is why Hasina has said that to curtail extremism in Bangladesh, India has to do its bit.” Instead, “your Home Minister calls us termites”. Another adds, “India should also look at itself. What happens there has repercussions here”. One goes even further. He direly predicts, “Hindutva will extend to us and could lead to open conflict.”

Assam itself is not the problem. “Our northern borders are principally with Meghalaya – and they are not complaining. With Assam, we have only a limited frontier. We look on the states of the North-East as our natural economic hinterland and believe the potential for economic interaction has only been superficially touched.” “Already,” it is claimed, “we export more to your North-East than all of the rest of India” (a claim I have not been able to check).  So, “why would any considerable number of Bangladeshis go to Assam in search of employment when our per capita income is double that of Assam?”

“We have accepted back several thousand illegal migrants detected in Italy,” says one authority. “In a similar manner, we are ready to accept any Bangladesh citizen who has gone to India illegally. But we cannot have a blanket announcement that all Assamese Muslims are Bangladeshis if their papers do not prove them Assamese. The point is to establish through papers that they are Bangladesh nationals illegally in India. Therefore, we do not regard Assam as an issue between our two countries”. He joins me in laughing about the NRC exercise having identified more Hindus than Muslims without proper papers.

The Rohingya issue, in my experience, is more germane than NRC in Assam or the Citizenship (Amendment) Act to the impact of Indian humanism – or lack of it – on the Bangladeshi mind. Perhaps this had something to do with Harsh Vardhan Shringla, former High Commissioner to Bangladesh (and, therefore, a familiar figure to many Bangladeshis), and now Foreign Secretary, having been on an official visit to Myanmar even while I was in Bangladesh celebrating Liberation Week.

The olive branch being held out to the army junta in Myanmar has disturbed many opinion-makers in Bangladesh, who feel India has not done all it could (and should) have done to look after the Rohingya refugees - precisely because they are Muslim. “Hasina,” said one sympathizer of the regime, “is caught between Buddhist extremism on her left and Hindu extremism on her right. How, in these circumstances, can Bangladesh remain an island of secularism?” he wistfully asks.

Of course, all atrocities against Muslims in India, individually as well as collectively on account of cow slaughter, real or alleged, distortion of Muslim rule in the public discourse and educational curricula in India, non-appreciation of the composite culture and administration promoted by Moghul and other Muslim rulers, certain judicial pronouncements such as those on Ayodhya and related cases, ‘love jihad’, et al, have had the most deleterious impact on Bangladeshi secularism.

Thus far, Sheikh Hasina’s regime has fought back gamely – but how long will she be able to hold out? If secularism is allowed to slide in India with governmental connivance, as has been the case these last seven years, Bangladesh cannot be kept isolated from the communal virus. “Communalism,” says one former Bangladesh High Commissioner to India, “is a time bomb. For the moment, it has gone underground but it could suddenly burst into the open”.