Advertisement
Home / World / Hasina: Why this result? Why not?

Hasina: Why this result? Why not? 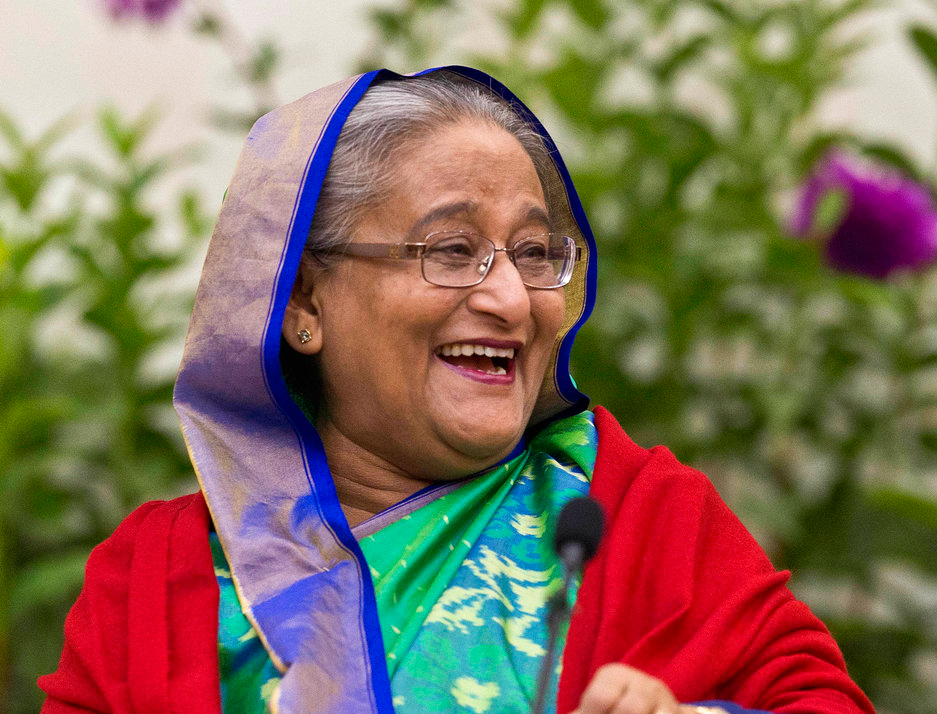 The alliance led by Sheikh Hasina has bagged 96 per cent of the seats in Bangladesh’s general election, creating history and triggering cries of foul play that she has confronted by citing the Congress’s fate in India in 2014.

Election Commission secretary Helal Uddin has announced that the Awami League-led coalition has won 288 of the 300 seats. The Jatiya Oikya Front (National Unity Front), a rainbow alliance led by the Bangladesh Nationalist Party that had called for a silent revolution in the ballot boxes, has won just seven seats.

Around 80 per cent of the country’s 10.4 crore voters had turned out on Sunday.

“If you ask me, ‘Why this result’, I will say, ‘Why not?’” Prime Minister-designate Hasina told reporters in Dhaka.

Hasina, who has won a record third straight term in office, called the unprecedented result the “people’s mandate” while the Opposition alleged the polls were “unfair” and demanded an immediate election afresh.

Amid claims and counter-claims, the landslide also stirred a debate on the long-term fallout of a poll boycott as a political tool. The Opposition had boycotted the last general election, effectively vacating the political space and causing it to be largely occupied by the ruling party, at least one editor in Dhaka said.

“The verdict has given me the opportunity to continue the development of Bangladesh. The people of the country gained from the development of the last 10 years and voted for us,” Hasina said on Monday during an interaction with foreign observers and foreign reporters.

Although a victory for the Awami League was expected, the Opposition cited the brute majority to raise questions about the fairness of the polls. But Bangladesh does have a history of one-sided election verdicts.

Leaders of the Opposition front, who were conspicuous by their absence during the campaign, called the polls a “farce” and accused the government of using the administration and the police to rig the process.

“We want a fresh election…. We will also move court challenging this election,” said BNP secretary-general Mirza Fakrul Islam Alamgir. He himself won with a huge margin from his constituency, Bogura-6.

The Opposition parties, he said, will discuss among themselves and carry out a prolonged movement to oppose the “unfair” election.

Chief election commissioner K.M. Nurul Huda ruled out fresh polls, saying there were no reports about any large-scale irregularities.

Hasina took care to insist that the results were not surprising and blamed the Opposition parties for their dismal show.

“One of their leaders (Khaleda Zia) is in jail. The other leader (Khaleda’s son Tareq Zia) is convicted and a fugitive…. They engaged in trading while distributing nominations — seats were auctioned,” she said.

“They didn’t have an answer to the question of who would be their prime ministerial candidate…. They were not visible during the campaign phase. They are to be blamed for this result.”

Hasina sought to draw a parallel with India. “How many seats did the Congress win in the last election? Did they have an answer to (the question) who their PM would be?”

In 2014, the BJP-led alliance had bagged 336 seats, steamrollering the Congress whose tally was reduced to 44.

A closer look at past poll results in Bangladesh reveals that the voters have often delivered sweeping mandates. In 2008, the last time Bangladesh had participatory polls, the Awami League-led alliance won 263 seats while the BNP-Jamaat-e-Islami combine had to be content with 33.

“The 2008 election was closely contested and both parties had campaigned extensively…. This time, the Opposition was hardly visible in the run-up to the election. They were also missing in action in the last five years,” the editor of a Bangladeshi news channel said.

Several social media users have started ridiculing the results with memes, which the editor said was part of efforts to discredit the election.

“The problem is that the Opposition leaders restricted themselves to social media to spread their messages: that’s why there was a lack of connect,” the editor said.

The BNP-Jamaat combine had not taken part in the 2014 general election because its demand for a poll-time caretaker government was not met.

Alamgir, the BNP leader, said the latest verdict had proved that the decision to stay away from the last election was the “right decision”.

Political observers, however, said the BNP’s absence from the political stage for the past five years — the Opposition party had not a single MP in Parliament — had cost it dear, causing it to lose its grass-root organisation while the Awami League kept expanding its support base.

On Monday, Hasina reaffirmed that she would implement her development projects for everyone, irrespective of their political affiliations.

“That’s what I have been doing for the last 10 years and that’s why people voted for us…. More than 24 hours have passed since the polls ended, but there has not been any attack on the Opposition parties. You compare this with what happened after the BNP came to power in 2001. They attacked our offices and supporters,” Hasina said, vowing to protect the vanquished.

The Awami League leadership has already asked its leaders to display restraint in their celebrations and advised them not to organise big victory processions.

Hasina said that several world leaders, including Indian Prime Minister Narendra Modi, had sent her congratulatory messages after the results.

“The chief minister of West Bengal, Mamata Banerjee, also called me,” she said.

In Dhaka, whiff of too big a victory