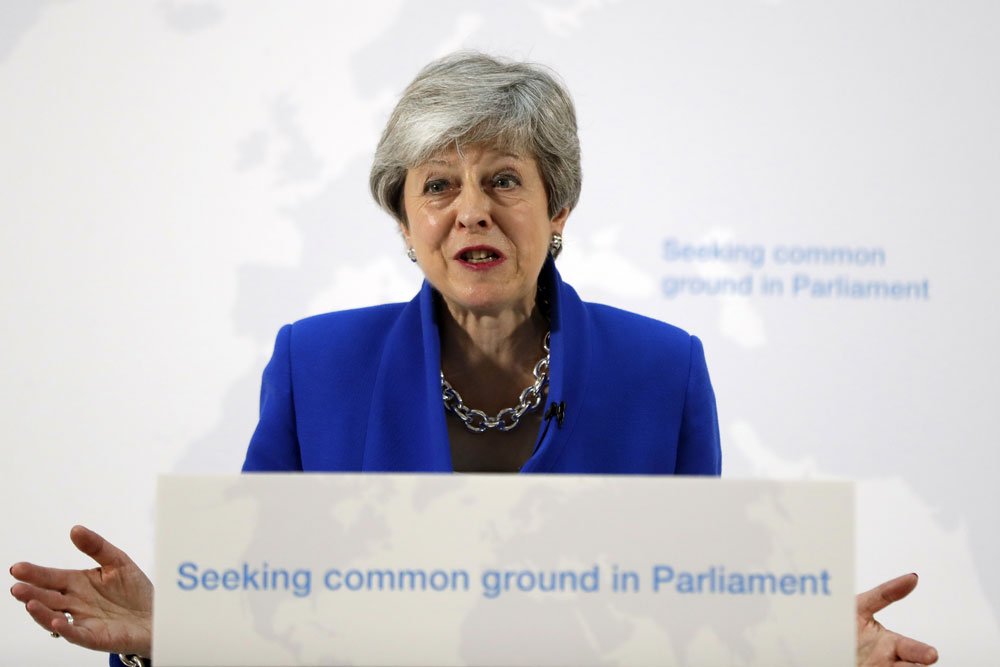 In a major concession, British Prime Minister Theresa May on Tuesday offered UK lawmakers the chance to vote on whether to hold a new referendum on the country's membership in the European Union — but only if they back her thrice-rejected Brexit agreement.

May made the offer as part of a desperate attempt to persuade Parliament to back a divorce deal that will allow the UK make an orderly, if delayed, departure from the EU.

She plans to ask the House of Commons to vote in early June on a withdrawal agreement bill, in what May called a 'last chance' to seal a Brexit deal. Soon after that vote, she will give a timetable for her departure as Conservative leader and prime minister.

In a speech Tuesday, May said the bill would include 'a requirement to vote on whether to hold a second referendum' that would give Britons a chance to approve or reject the terms of Brexit. A referendum is a key demand of opposition lawmakers who have until now rejected May's deal.

'I do not believe that this is a route we should take,' said May, who has long opposed a new public vote on Brexit. 'But I recognize the genuine and sincere strength of feeling across the House on this important issue.'

The Brexit referendum, however, will only happen if Parliament backs the EU withdrawal bill and it becomes law, something that still seems unlikely, despite May's last-minute changes.

Ian Blackford, a lawmaker with the pro-EU Scottish National Party, said it was 'too little, too late from a prime minister who is headed for the exit door.'

May's tack toward the opposition further angered pro-Brexit Conservative lawmakers, who are already furious at her failure to take Britain out of the EU on schedule. They want to replace her with a staunch Brexit supporter such as Boris Johnson, a former foreign secretary.

'There's nothing new or bold about this bad buffet of non-Brexit options,' said Ian Duncan Smith, a former Conservative leader.

Conservative lawmaker Owen Paterson, a prominent Brexiteer, tweeted that the referendum vote promise was 'a direct insult to 17.4m people' who voted in 2016 to leave the EU.

Britain voted for Brexit in June 2016 and was due to leave the EU on March 29, but the bloc has extended the deadline until Oct. 31 amid the UK's political impasse. Talks on securing a compromise on the Brexit deal between May's Conservatives and Labour broke down last week.

May says she will try again the week of June 3 by asking lawmakers to vote on a withdrawal agreement bill implementing the departure terms.

Outlining what she called a 'new Brexit deal,' May tried to win support from both pro-EU and pro-Brexit sides of the House of Commons.

To Brexiteers concerned that the need to ensure an open Irish border will keep the UK too closely aligned to EU rules, she offered a promise of unspecified 'alternative arrangements' to a contentious provision on the border known as the backstop.

But most of her concessions were aimed at the left-of-centre opposition Labour Party. May promised that Britain would maintain high standards on workers' rights and environmental protections — both Labour priorities — and said UK lawmakers would get to decide on what customs arrangements should be in place to ensure 'as close as possible to frictionless trade' between Britain and the EU.

Customs is a major bone of contention between the parties. Labour wants to stick close to EU rules in order to guarantee seamless trade, while the government wants a looser relationship that would leave Britain freer to strike new trade deals around the world.

Addressing lawmakers — though in a speech at the corporate headquarters of PWC rather than in the House of Commons — May said she was 'making a new offer to find common ground in Parliament.'

'I have compromised. Now I ask you to compromise too,' she said.

May, who knows her legacy will be dominated by Brexit, implored lawmakers to let Britain leave the EU 'in a way that protects jobs, protects our security, maintains a close relationship with our friends and works for the whole United Kingdom.

'It is practical. It is responsible. It is deliverable. And right now, it is slipping away from us,' she said.