Searching in peace for aliens 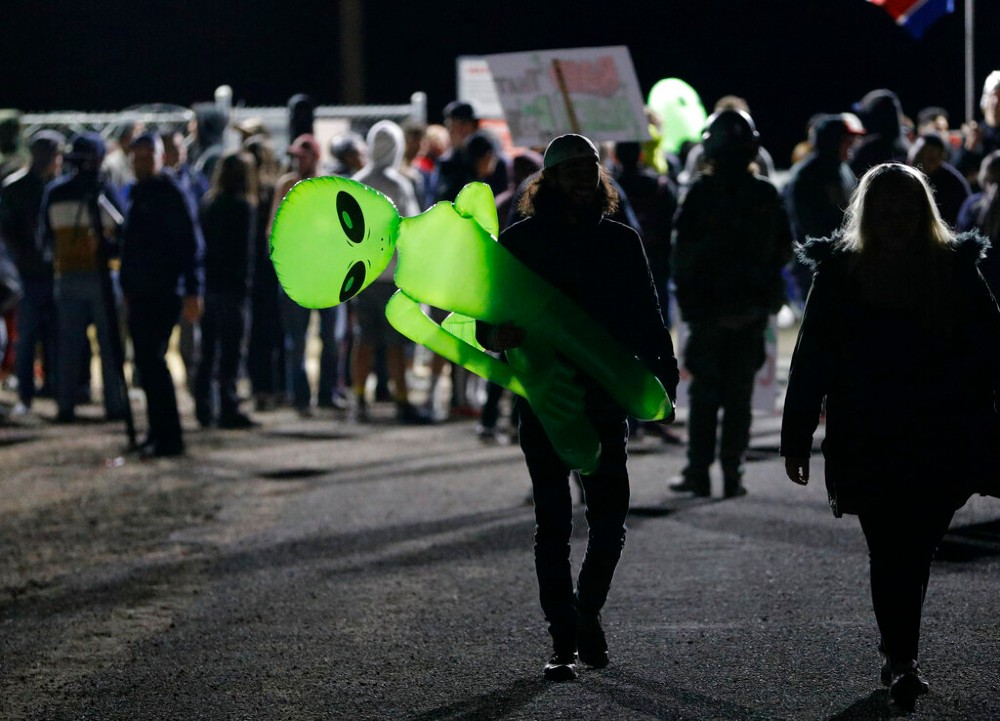 Hundreds of people in search of aliens, bragging rights or just a good time have descended on a desolate Nevada town, answering the call of a meme-inspired Facebook event encouraging them to “storm Area 51”.

More than two million people had committed — at least on Facebook — to storming the secretive facility in the desert, drawing so much attention that an Air Force spokeswoman warned in July that trying to get into the off-limits area would be “dangerous”.

Area 51, a unit of the Nellis Air Force Base, is a secret military site that has long been rumoured — in television shows, movies and online forums — to be the home of extraterrestrial life.

Visitors got to pick between two competing celebrations in settings that could not be more different. One, sponsored by Bud Light, kicked off in downtown Las Vegas with music and alien-themed beer Thursday. The other, taking place in a desert town near Area 51 that is home to fewer than 100 residents and one restaurant, is scheduled to run till Sunday.

The duelling events this week spawned from a dramatic falling out between hosts who split to form their own events. Matty Roberts, a college student who created the Facebook event in the first place, sided with the downtown Las Vegas party, claiming that the gathering near Area 51 would be a repeat of Fyre Festival, the infamous concert debacle in the Bahamas.

On Friday, the other gathering was starting to get into gear at the Area 51-adjacent town of Rachel, Nevada, where Little A’Le’Inn motel is the only establishment, save for a church. There, people were setting up tents, hoisting inflatable green aliens and zipping through the desert on all-terrain vehicles.

”I feel like I’m a part of some awakening,” said Mike Main, who was draped in a tinfoil coat with an ambitious T-shirt claiming in advance, “I stormed Area 51.”

Pam Kinsey, an employee of the Little A’Le’Inn motel who has lived in Rachel for 31 years, said early on Friday that employees had been working around the clock to accommodate visitors.

“We’ve got someone coming in a panda bear suit right now,” said Kinsey, as guests began sitting down to breakfast around 8am. “There’s all kinds of all kinds.”

Earlier on Friday, a group of about 100 people touched down outside of an Area 51 gate, where police stood guard.

It’s still not clear how many people will actually show up for the events this weekend and some suggested it was mostly online hype.

“I’m a little disappointed because it’s a lot less people than they said online,” Nathan Brown, who drove to the site from Portland, Oregon, told the Las Vegas Review-Journal.

Still, the celebratory crowd, some of whom wore tin foil hats, chanted about aliens and admired the cuteness of a dog that accompanied a man wearing camouflage who had a rifle strapped to his chest.

“We walked until we got to the fence but there was a bunch of armed guards,” Austin Nelson, 21, recounted Friday. Nelson and his friends had driven 18 hours from Alberta to attend.

The event has revived an age-old question: Do aliens really exist?

Seth Shostak is a senior astronomer at the SETI Institute in Mountain View, California. (SETI is short for the Search for Extraterrestrial Intelligence.) Researchers there are searching for intelligent aliens — ones that “can at least use a radio transmitter” , Shostak said.

Shostak said his phone had been ringing all day on Friday.

“We don’t investigate reports of sightings here,” Shostak clarified at the beginning of an interview. “Although I have to tell you, also, that I get phone calls from people that are having difficulties with aliens in their personal lives, so I do deal with the idea.”

While Shostak said the evidence of alien life in the universe is, at this time, “essentially none”, he also contended that in all the space of the universe, it would be surprising if Earth alone was home to intelligent life.

“It’s like saying, ‘Will we ever cure the common cold?’ I would say, we will,” he said.

As far as the green little guys that some imagine waddle through Area 51’s hallways, Shostak said there was almost no chance. Secrets like that, he said, would get out.

A third event in nearby Hiko, Nevada, also has food, drink and music and is geared towards “true believers”, Keith Wright, one of the organisers, said last week, including speakers who have researched theories that extraterrestrial life has been kept under wraps at Area 51.

The fact that the Friday events in Nevada were taking place the same day as a global climate strike was not lost on climate protesters in cities around the world, nor those observing from afar (but still on Earth).

“I skipped the Area 51 raid for this,” read a sign held up by one protester in Australia.

“There are two types of people in this world,” one Twitter user wrote, “those who storm area 51 and those who strike for the climate.”