Sean Penn's documentary 'Superpower' on Zelenskyy to premiere in Berlin

Portraying the Ukrainian president in wartime, the film will be showcased in Berlin Film Festival 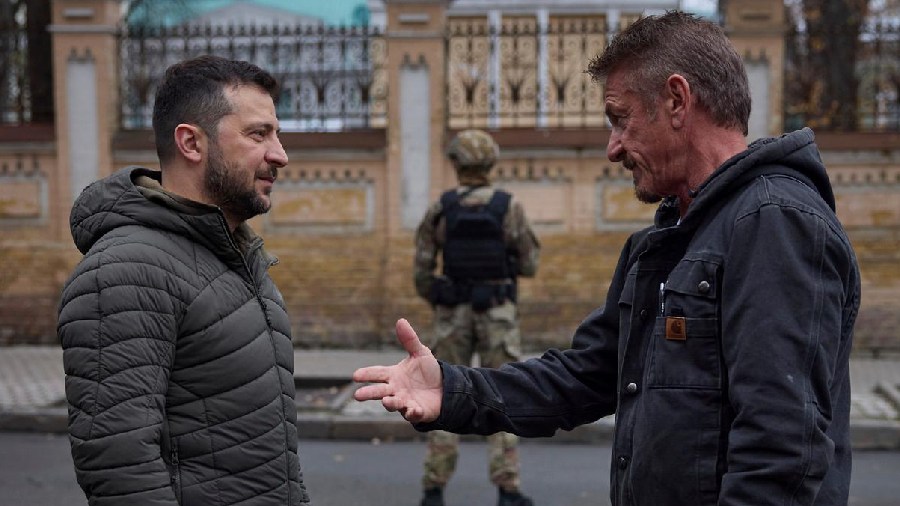 The co-directors of the Berlinale, Carlo Chatrian and Mariette Rissenbeek have confirmed that the upcoming Berlin Film Festival, held from February 16-26, will show solidarity with Ukraine and Iran through various events and screenings.

"The war in Ukraine and the protest movement in Iran are two areas of conflict that represent the larger issues of democracy and freedom of speech," said executive director Rissenbeek at a press conference on Monday. Accordingly, these issues will be a focus throughout the festival, while the event's official pin is designed in blue and yellow, the colors of the Ukrainian flag,

Chatrian, the festival's artistic director, also announced that  Sean Penn will be celebrating the world premiere of his highly anticipated documentary on Ukrainian president, Volodymyr Zelenskyy, in Berlin. The Oscar-winning actor co-directed "Superpower" with Aaron Kaufman.

Penn, who has been involved in numerous anti-war and humanitarian campaigns, was already planning to film a documentary at Ukraine's eastern front before Russia invaded the country on February 24 last year.

"President Zelenskyy and the Ukrainian people have risen as historic symbols of courage and principle," Penn said as the war broke out. "Ukraine is the tip of the spear for the democratic embrace of dreams. If we allow it to fight alone, our soul as America is lost."

At the press conference, Chatrian also unveiled the titles in both the official competition and the Encounters competitive section.

There will be 18 films competing for the Golden and the Silver Bears, with 19 countries represented through works of different cinematic forms, including documentaries, comedies, dramas and an animated film by Japanese manga artist Makoto Shinkai — the first anime film to compete since Spirited Away by Hayao Miyazaki won the Golden Bear in 2001.

The programmers also confirmed that Steven Spielberg is set to attend the festival to receive an Honorary Golden Bear for his lifetime achievement in film.