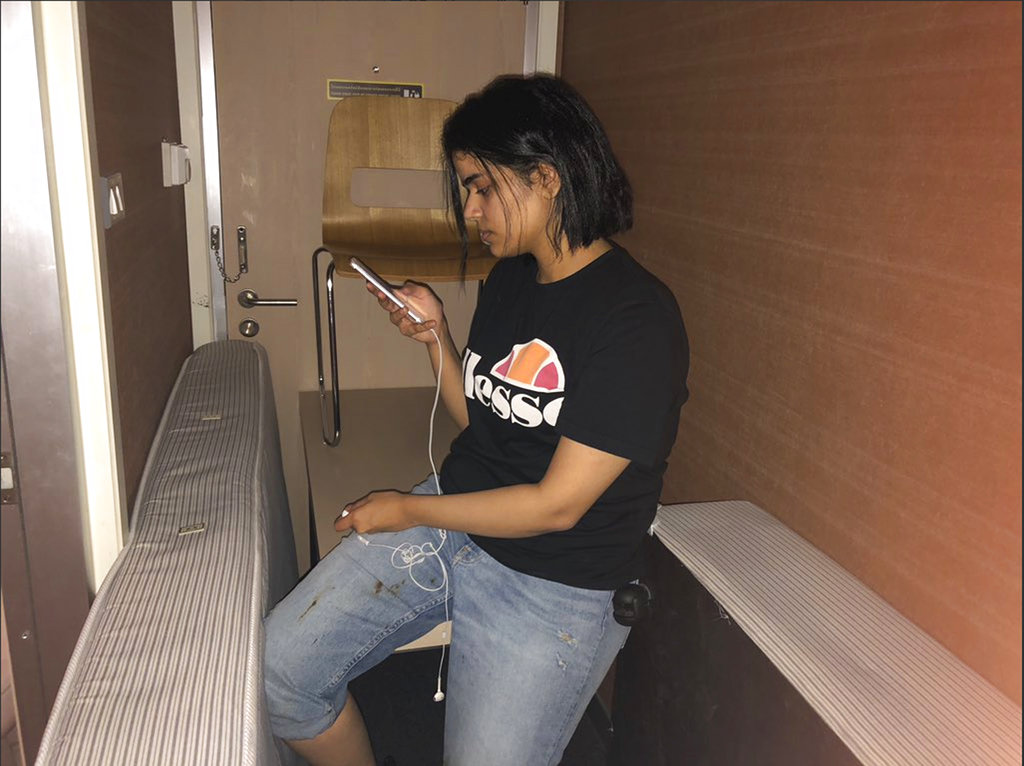 A Saudi woman who says she is fleeing abuse by her family and wants asylum in Australia barricaded herself in an airport hotel in the Thai capital on Monday and was sending out desperate pleas for help over social media.

Rahaf Mohammed Alqunun began posting on Twitter late on Saturday after her passport was taken away when she arrived in Bangkok on a flight from Kuwait. The 18-year-old has been appealing for aid from the United Nations refugee agency and anyone else who can help.

The office of the United Nations High Commissioner for Refugees, UNHCR, issued a statement, saying it was following the case and 'trying to seek access from the Thai authorities' to meet with Alqunun to assess her need for international protection.

On Twitter, where Alqunun has accumulated tens of thousands of followers in about a day-and-a-half, she wrote of being in 'real danger' if forced to return to her family under pressure from Saudi authorities, and has claimed in media interviews that she could be killed.

based on the 1951 Convention and the 1967 Protocol, I'm rahaf mohmed, formally seeking a refugee status to any country that would protect me from getting harmed or killed due to leaving my religion and torture from my family.

Alqunun told Human Rights Watch she was fleeing abuse from her family, including beatings and death threats from her male relatives who forced her to remain in her room for six months for cutting her hair.

For runaway Saudi women — to whom Saudi law grants male relatives legal guardianship even if they are adults — fleeing can be a matter of life and death, and they are almost always doing so to escape male relatives.

Alqunun appeared to have scored a small victory on Monday when the flight on which she said she would be sent to Kuwait departed without her. And shortly after noon on Monday, the Germany's ambassador to Thailand, Georg Schmidt, posted a message of concern on his verified Twitter account about her case, which he said he was conveying to Thai authorities.

The Associated Press reached Alqunun by telephone Sunday night in her hotel room and she spoke briefly, saying that she was tricked into giving up her passport on her arrival in Bangkok.

'Someone told me he would help me get a visa for Thailand, so I can go inside,' she said 'After that he took my passport. After one hour he came with five or four persons and told me my family wants me. And they knew I had run away and should go back to Saudi Arabia.'

She has identified the man who took her passport variously as a Kuwait Airways employee or a Saudi Embassy official. She said Saudi and Thai officials then told her she would be returned to Kuwait on Monday, where her father and brother are awaiting her.

He was quoted in Saudi press as saying that Alqunun was stopped by Thai authorities because she did not appear to have a return ticket, a hotel reservation or itinerary to show she was a tourist. He said the Saudi Embassy has no authority to stop anyone at the airport and that this decision rests with Thai officials.

'She was stopped by airport authorities because she violated Thai laws,' he was quoted as saying in Sabq, a state-aligned Saudi news website. 'The embassy is only monitoring the situation,' al-Shuaibi said.

Thai officials were not immediately available on Monday for comment.

Alqunun's plight mirrors that of other Saudi women who have tried to flee abusive or restrictive family conditions.