Samantha Smith: How a 10-year-old became a Cold War icon of peace

Her letter, penned at age 10 to Soviet leader Yuri Andropov, remains relevant on what would have been her 50th birthday 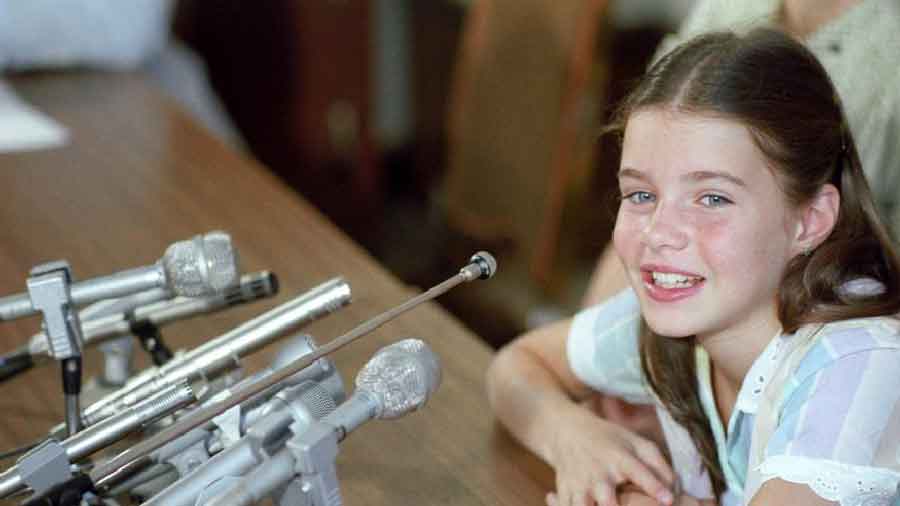 She wrote an urgent letter at age 10 to then Soviet Union leader, Yuri Andropov, that made headlines in the 1980s. Her message remains relevant on what would have been her 50th birthday.

Pakistani Yousafzai survived being shot in the head by the Taliban in 2012 for fighting for girls' right to education. Thunberg's weekly protests for climate change action, that began in her native Sweden in 2018, helped birth the global youth-ledFridays for Future movement. Both were 15 when they started fighting their causes.

Back in the 1980s, at the height of the Cold War between the US and the former USSR, a 10-year-old American girl also made headlines.

Her advocacy for peace and the prevention of nuclear war remains pertinent 40 years on, as veiled threats of nuclear attack are made during the current war waged by Russia in Ukraine.

Her name was Samantha Reed Smith.

'Nobody would ever want to have another war'

Born on June 29, 1972 in Houlton, Maine, Smith was only 5 when she wrote to Queen Elizabeth II expressing her admiration.

When she was 10, the news then focused most on the Cold War and nuclear arms race that was escalating between her country led by President Ronald Reagan and Russia.

"There was always something on television about missiles and nuclear bombs," she once wrote. She described seeing a scientist who said "that a nuclear war would wreck the Earth and destroy the atmosphere. Nobody would win a nuclear war."

Then her mother showed her a copy of Time magazine dated November 22, 1982 that featured new Russian leader, Yuri Andropov. In the cover story she read with her mother, it was clear that the Soviets and the US both feared the other would start a nuclear war.

"It all seemed so dumb to me. I had learned about the awful things that had happened during World War II, so I thought that nobody would ever want to have another war," she reflected. "I told Mom that she should write to Mr. Andropov to find out who was causing all the trouble. She said, 'Why don't you write to him?' So, I did."

A letter to the Kremlin

My name is Samantha Smith. I am 10 years old. Congratulations on your new job. I have been worrying about Russia and the United States getting into a nuclear war. Are you going to vote to have a war or not? If you aren't please tell me how you are going to help to not have a war. This question you do not have to answer but I would like it if you would. Why do you want to conquer the world or at least our country? God made the world for us to share and take care of. Not to fight over or have one group of people own it all. Please lets [sic] do what he wanted and have everybody be happy too."

She didn't get an immediate response, even if her letter was later published in the Russian newspaper, Pravda. This prompted her to write to the Soviet ambassador in Washington, D.C. asking if Andropov planned to respond.

On April 26, 1983, she received a response from Andropov himself.

Addressing Smith's specific question and the disastrous impacts of nuclear weapons, he said his country had declared that it would not use nuclear weapons first against other countries.

"Yes, Samantha, we in the Soviet Union are trying to do everything so that there will not be war on Earth. This is what every Soviet man wants. This is what the great founder of our state, Vladimir Lenin, taught us," Andropov wrote.

He also commended Smith's honesty and courage, likening her to Becky, "the friend of Tom Sawyer in the famous book of your compatriot Mark Twain."

Andropov ended by inviting Smith to visit the Soviet Union, which she did with her parents in July 1983.

In a 2018 article, Smithsonian Magazine described 1983 as "a perilous moment in the Cold War — in March that year, Reagan delivered his "Evil Empire" speech, calling for increased military spending and a modernized nuclear stockpile to thwart the Soviet Union. Meanwhile, Andropov compared Reagan to Adolf Hitler.

Nevertheless, during Smith's two-week trip to the Soviet Union, she and her family visited Moscow, Leningrad and Artek, a children's camp on the Black Sea. She never got to meet Andropov in person, though: By then he was very ill and they only spoke via telephone.

Smith's visit attracted much media scrutiny both in Russia and the US. While the Russian media and public welcomed her visit, some in the US press regarded it as a public relations exercise. She also received letters questioning if she was a tool of Soviet propaganda.

Nicknamed "America's Youngest Ambassador," Smith attended the International Children's Symposium in Kobe, Japan in December 1983. During a speech, she suggested that US and Soviet leaders exchange granddaughters for two weeks every year since a leader would not want to bomb a country that "his granddaughter was visiting."

She gave TV interviews, and in February 1984 hosted a children's special for the Disney channel, "Samantha Smith Goes to Washington: Campaign '84," where she interviewed various political leaders about election campaign issues.

Guest appearances in comedies and a regular role in a television series followed. With her father's help, she also authored her book, "Journey to the Soviet Union" (1985).

While her actions made no impact on easing Cold War tensions, her observations during and after her trip to Russia helped dismantle some of the suspicions that ordinary Russians and Americans had of each other.

"Some people have the wrong impression about the Soviets," she told reporters while touring Russia. "[They] want peace like I do."

She also described Russian children as being just the same as those she knew in the US.

"They were just really nice people to me," she said.

In an interview with the Smithsonian Magazine in 2018, writer, teacher and historian Lena Nelson, who grew up in the Soviet Union said: "While it is possible that the Soviets' goal was to use her to project an image of a peace-loving nation, Samantha and her parents' trip also placed the Americans in a favorable light, thus making it harder for the Soviets to continue with their depictions of Americans as evil warmongers."

Unfortunately, while returning to Maine from London where she had been filming for her series "Lime Street" in August 1985, Smith and her father were killed in a plane crash. She was only 13.

Among the many who reacted to her untimely death was Mikhail Gorbachev, who by then was the new Soviet leader and whose liberalizing concepts of perestroika and glasnost prefaced the collapse of the Soviet Union.

"I feel that was it not for Samantha's tragic death she could have been an active participant in social change and do a lot of good," he wrote then.

On June 29, Samantha Reed Smith would have turned 50.