Turkey, Ukrainian and Russian foreign ministers ended their talks without any agreement on a ceasefire 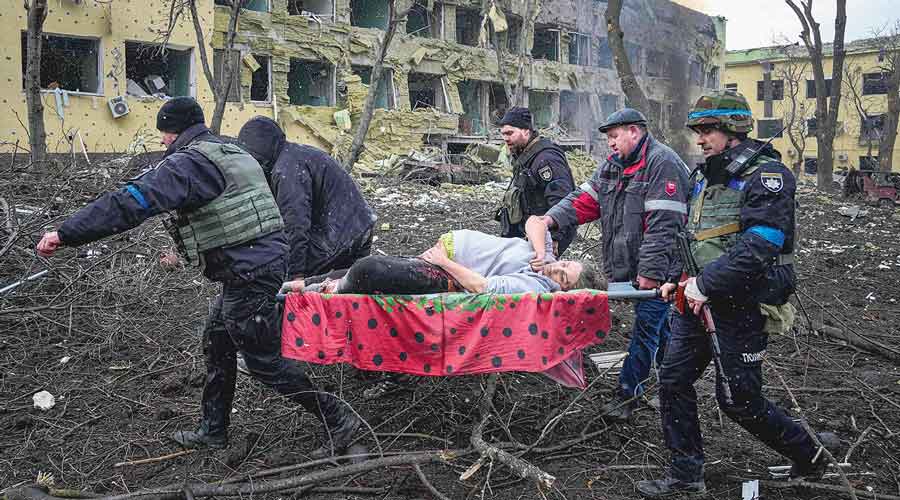 An injured and pregnant woman being carried from a maternity hospital that was damaged by shelling in Mariupol, Ukraine, on Wednesday.
AP/PTI
New York Times News Service , Reuters   |   Lviv, Ukraine   |   Published 11.03.22, 03:09 AM

The top diplomats from Russia and Ukraine failed to make progress during talks on Thursday, dashing hopes that President Vladimir Putin might soon pull back from a two-week-old conflict that has unleashed a humanitarian catastrophe and forced millions from their homes.

Meeting in Turkey, the Ukrainian and Russian foreign ministers ended their talks without any agreement on a ceasefire or even on allowing Ukrainians in areas under Russian bombardment to escape conditions so dire that in one besieged city, Mariupol, some families are felling trees for fuel and burying bodies in trenches.

Despite hopes before the meeting that Moscow’s demands were narrowing, Russia’s envoy said his country would not end its offensive until Ukraine surrendered, Ukraine’s foreign minister, Dmytro Kuleba, told reporters.

Russia’s foreign minister, Sergey V. Lavrov, indicated that a ceasefire was not even on the table.