Disclosure comes days after Moscow received initial shipments of Iranian-made drones, some of which American officials said had mechanical problems 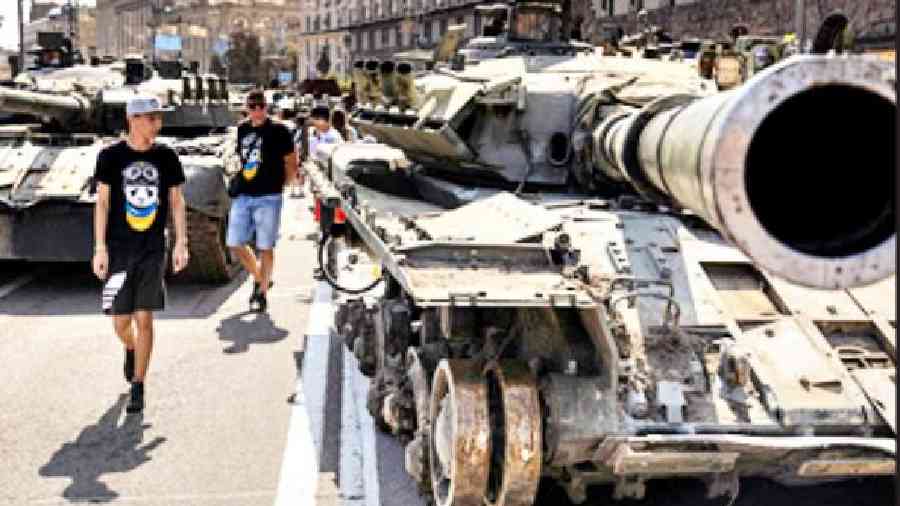 Ukrainians visit an exhibition of destroyed Russian military vehicles and weapons in the centre of Kyiv.
Julian E. Barnes   |   Washington   |   Published 07.09.22, 12:48 AM

Russia is buying millions of artillery shells and rockets from North Korea, according to newly declassified American intelligence, a sign that global sanctions have severely restricted its supply chains and forced Moscow to turn to pariah states for military supplies.

The disclosure comes days after Russia received initial shipments of Iranian-made drones, some of which American officials said had mechanical problems.

US government officials said Russia’s decision to turn to Iran, and now North Korea was a sign that sanctions and export controls imposed by the US and Europe were hurting Moscow’s ability to obtain supplies for its army.

The US provided few details from the declassified intelligence about the exact weaponry, timing or size of the shipment, and there is no way yet to independently verify the sale. A US official said that, beyond short-range rockets and artillery shells, Russia was expected to try to purchase additional North Korean equipment going forward.

“The Kremlin should be alarmed that it has to buy anything at all from North Korea,” said Mason Clark, who leads the Russia team at the Institute for the Study of War.

Before Russia’s invasion of Ukraine, the White House began declassifying intelligence reports about Moscow’s military plans — then disclosing that material, first to allies privately and then to the public.

After something of a lull in the disclosures, the American government has once again begun declassifying information to highlight the struggles of Russia’s military, including the recent intelligence about the purchase of Iranian drones and the Russian army’s problems recruiting soldiers.

Broad economic sanctions, at least so far, have not crippled Russia.

Energy prices, driven up by the invasion, have filled its treasury and enabled Moscow to blunt the fallout of its banks being cut off from international finance and curbs on exports and imports.

Sanctions against individual Russian oligarchs also have failed to undercut the power of President Putin. But American officials said that, when it came to Russia’s ability to rebuild its military, the economic actions of Europe and the US had been effective.

American and European sanctions have blocked Russia’s ability to buy weaponry, or electronics to make that weaponry.

Moscow had hoped that China would be willing to buck those export controls and continue to supply the Russian military.

But in recent days, American officials have said that while China was willing to buy Russian oil at a discount, Beijing, at least so far, has respected the export controls aimed at Moscow’s military and not tried to sell either military equipment.

Gina Raimondo, the commerce secretary, has repeatedly warned China that if Semiconductor Manufacturing International Corporation, China’s largest computer chip maker, or other companies violate sanctions against Russia, the US will effectively shut down those businesses, cutting off their access to the American technology they need to make semiconductors.

With most countries treading carefully in the face of American pressure, Russia has focused its deal-making on Iran and North Korea.

Both Iran and North Korea are largely cut off from international commerce thanks to American and international sanctions, meaning neither country has much to lose by cutting deals with Russia.

Any deal to buy weaponry from North Korea would be a violation of UN resolutions aimed at curbing weapons proliferation from Pyongyang.

It is unclear how much the purchasing from North Korea has to do with the export controls, however. There is nothing high-tech in a 152- mm artillery shell or a Katyusha-style rocket that North Korea produces, said Frederick W. Kagan, a military expert at the American Enterprise Institute. A US official said the new deal with North Korea showed the desperation in Moscow. And Kagan said turning to North Korea was a sign that Russia was seemingly unable to produce the simplest matériel needed to wage war.

“The only reason the Kremlin should have to buy artillery shells or rockets from North Korea or anyone is because Putin has been unwilling or unable to mobilise the Russian economy for war at even the most basic level,” Kagan said.

Restricting Russia’s military supply chain is a central part of the American strategy to weaken Moscow, with the aim to hamper both its war effort in Ukraine and its future ability to threaten its neighbours.

It has been clear for months, both from Russian operations in Ukraine and disclosures by the US government, that Moscow has struggled with its high-tech weaponry.