Remote learning stalls progress of kids and increases divide in US

Research suggests that students who suffered the most are those of colour, English language learners, and from low-income, and other marginalised groups 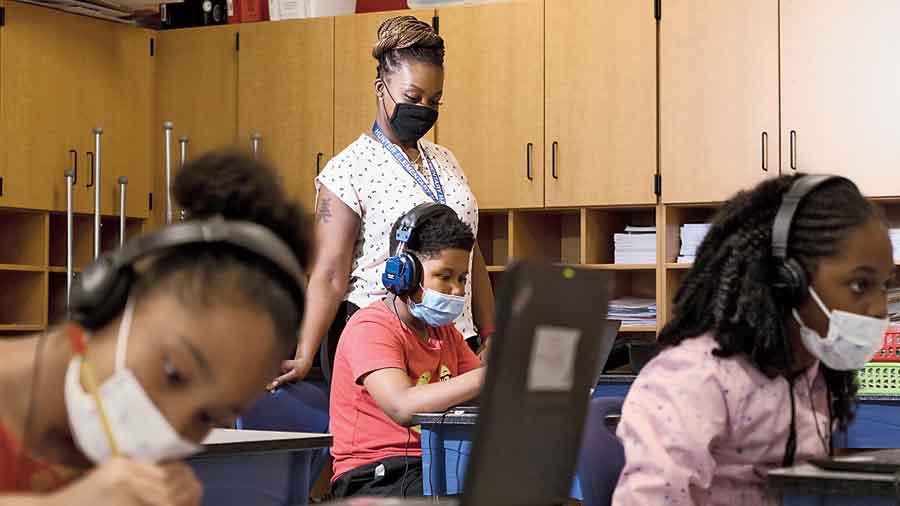 In second grade, Zion Graham bounded to school. He loved maths. His favourite book was about a slow turtle who took all day to get dressed.

Then came the pandemic, and months of joyless remote learning. Zion lost confidence in reading. His performance in third grade plummeted.

Zion, now 8, is spending his summer racing to catch up, back at Hunter Elementary School in Greensboro, North Carolina. When Zion and his schoolmates arrive by 7.45am each morning, they face a challenge — and a deadline. How much can they learn before fourth grade starts, to avoid falling even further behind?

Around the US, children are attending summer school like never before, as the country pushes billions of dollars into education to help children recover from the pandemic. From San Diego to New York City to Miami, hundreds of thousands of children are attending programmes this year, some for the first time. In Guilford County, North Carolina, the school district that includes Greensboro, summer school enrolment has skyrocketed to 12,000 from 1,200 two years ago.

Yet summer school, by its very nature, is short, and the pandemic’s impact on students is expected to stretch months, even years.

“You have kids who have the potential to catch up relatively easy — I mean, before Christmas,” said Tonette McQueen, Zion’s summer teacher. “Then you have some kids who will experience some growth, but will be behind for years to come.”

Though the pandemic hurt almost all students, creating learning gaps for some, and deepening existing gaps for others, research suggests that the students who suffered the most are like those in McQueen’s classroom — students of colour, low-income students, English language learners and other historically marginalised groups. Hunter Elementary is almost 90 per cent Hispanic and Black.

“It has definitely widened the gap for poor kids and kids of colour,” said Tomeka Davis, a sociologist at Georgia State University who studies education, with an emphasis on race and class.

Some education experts emphasise the need for summer programmes to be joyful experiences that go beyond academics, focusing on the whole child, including mental health. Some argue that kids need to just be kids this summer — and not be in school. Still others say that given the magnitude of the crisis, the classroom is precisely where children need to be.

For Zion, summer school feels a lot like a regular school day.

Students tumble out of buses in light-up tennis shoes and unicorn backpacks and grab breakfast. The school is a canvas of primary colours and geometric shapes: blue plastic chairs, red and yellow rectangles on the floor.

McQueen’s classroom is simple, but bright. The students, all 8 and 9, are solving multiplication equations and reading Ruby’s Wish, a book about a young Chinese girl who defies gendered expectations by aspiring to go to college.

Though the feel is largely academic, just one student appears truly unhappy to be there.

“It’s boring in school,” she says. “I just want to be playing at home all day and sleeping.”

Another girl offers a more mixed assessment: She “kind of” likes summer school, but “kind of not — because I have to wake up”. Still, she smiles during the day, raises her hand in class and happily spends recess exchanging fidget toys with a friend whom she doesn’t normally get to see.

Zion and his classmates were among the most affected by remote learning because the pandemic struck during their second grade year, a crucial time for learning to read. They spent the first half of third grade learning online.

Many are still somewhere in between those two grade levels, McQueen estimated. For example, though the students read along with much of Ruby’s Wish, they struggle to identify character traits or describe a point of view, concepts that will be built upon in fourth grade.

This moment is critical. Research shows that students who do not learn to read proficiently by the beginning of fourth grade are likely to remain poor readers in high school, and are at higher risk of dropping out or failing to graduate on time.

Even at his young age, Zion knows that he is behind. During a worksheet exercise that asks him to identify one challenge from the pandemic school year, he says “reading”.

“I know that hurts him,” said his mother, Sha’Corie Graham, 29, who is also the cafeteria manager at the school.

Graham, sitting in her office, let out a sigh. A single parent, she had taken the job to spend more time with her three boys, and it’s been hard for her to watch Zion struggle. A swell of emotion almost overtook her. “You’re going to make me cry,” she said.

When schools closed on March 16 last year, Zion and his brothers, now 7 and 5, stayed home with their grandmother, while Graham went to work packing hundreds of meals for local families. At night, she tried to help her boys with schoolwork; they had little experience typing and did not know how to use the track ball on a laptop.

“As a parent, it kind of makes it feel like you failed,” Graham said. “I have to go home, I have to cook, they have to get a bath, they have to pick out clothes, we have to do hair. I felt like, I’m so busy and so caught up in other stuff that my son is failing school.”

After Zion returned to the classroom in January, the trouble continued. While he had always struggled in reading, his problems began to bleed into maths — his favourite subject — because he could not understand the word problems.

His mother worries about what the setback will do to his long-term confidence.

He still loved school — so much so that he asked about it on weekends, and eagerly picked out his clothes for the next day. But at the end of the year, he had anxiety about his tests, his mother said. She encouraged him to do his best, bringing him an Egg McMuffin from McDonald’s on exam day and even offering him a few sips of her coffee. “I said, ‘Wake up. You got this.’”

The trend is likely to play out nationally. In Texas and Indiana, some of the first states to release recent test results, students showed declines in reading and maths.

Summer school can be one effective strategy to help students make academic gains, but it takes time. Programmes should last at least five weeks and include at least three hours of academic instruction each day, said Catherine Augustine, a senior policy researcher at the RAND Corporation who has studied these programmes.

Students also need to attend consistently. That has been a challenge in Guilford County, where daily attendance averages 65 per cent to 75 per cent. And though the summer programme lasts six weeks, some families chose to attend for just three.

On a rainy day last week, just six of the 11 students in McQueen’s class showed up.

Those who did attend enjoyed a small class size, one benefit of summer school. Still, McQueen, who has been teaching for 17 years, is realistic about what she will be able to accomplish.

She believes students will also need small group instruction this fall, as well as tutoring and family support. “It really is an all-hands-on-deck situation,” she said.

The Guilford County school district plans to spend about $20 million in federal stimulus money on summer school over two years, and plans to use an additional $5 million to pay for high intensity tutoring, a particularly effective tool.

Zion may need more of that help. But his mother hopes that his love of learning can buoy him through this difficult period. Though he knows the answers only some of the time, he has not quit trying.

In McQueen’s classroom, he raises his hand every so often, and perks up during math. When he answers that 6x6=36, he wiggles in his chair and pumps his arm: “Yes!”