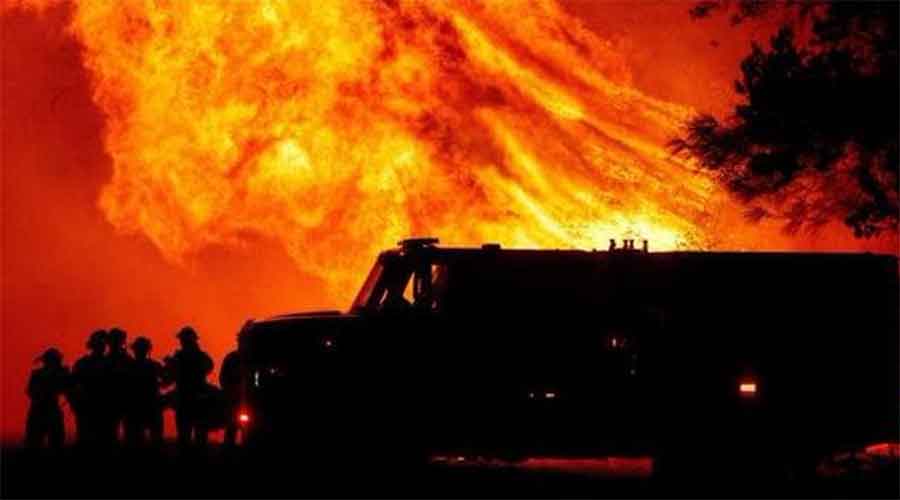 While more favourable weather has allowed firefighters to make some progress against the devastating blazes in Oregon, the crisis was far from over:
@realDonaldTrump
Mike Baker   |   Seattle   |   Published 17.09.20, 12:56 AM

The billowing wildfire smoke that has blanketed much of the West Coast with a caustic haze also began settling into the atmosphere thousands of miles away on Tuesday.

While more favourable weather has allowed firefighters to make some progress against the devastating blazes in Oregon, the crisis was far from over: The largest fires were still mostly uncontained, the air has been some of the most polluted on the planet for a week, and the state was setting up a mobile morgue as crews continued to sift through the rubble for missing people.

In California, where 25 people have died this year and 3.2 million acres — a modern record — have burned, officials had both successes and setbacks: Firefighters there contained two fires, one in Yuba County and the other north of Willits, and were trying to suppress 33 new blazes as stiff winds in the northeast pushed fires into new territory. There was still no significant rain in sight, and lands parched by warm weather remain at risk of igniting.

At the North Complex Fire, which has burned more than 270,000 acres northeast of Sacramento, winds whipped the flames across a clearing that had been plowed by bulldozers.

Captain Michael McIndoe and his crew were trying to stamp out any embers crossing a road. “It’s really challenging to stop it,” said Captain McIndoe, who was sent north by the Los Angeles fire department to join the fight.

Crews back in Los Angeles were working on Tuesday to beat back one wildfire that approached to within 500 feet of the famed Mt Wilson Observatory, according to the US Forest Service.

West Coast residents from San Francisco to Seattle and beyond have for days suffered from the smoke, which has sent air-quality readings soaring to hazardous levels, closed some schools and led officials to shut parks and beaches while pleading for people to stay indoors. In Seattle, Harborview Medical Centre reported seeing a rise in the number of people seeking help for breathing issues — many of them people with underlying conditions such as asthma or lung disease.

“The air outside right now is at historically polluted levels,” governor Jay Inslee of Washington said.

Air that was considered unhealthy to breathe was recorded as far away as Montana and up into Canada, though the high-level haze extended much further. Propelled by the jet stream and a high-pressure system over the Great Lakes, the smoke began arriving at higher altitudes across much of the continent.

By midday on Tuesday over Washington, the sun and the sky had blurred together into one diffused and omnipresent bright light.

Brian LaSorsa, a meteorologist for the National Weather Service in the Baltimore and Washington region, said he first noticed the smoke over the region on Monday, in the upper levels of the atmosphere. “Obviously we don’t see smoke very often from wildfires,” LaSorsa said.

But on the ground along the East Coast, the air quality remained clear. There was a possibility the smoke could descend, possibly later this week if a cold front comes through, LaSorsa said, but he expected it to stay aloft through Tuesday night.

The wildfires along the West Coast that are generating the atmospheric pollution had flared dramatically last week when winds whipped them into infernos that overwhelmed cities and razed hundreds of homes in Washington, Oregon and California. Wildfires have also been sparked in Idaho, where a blaze of nearly 70,000 acres near the Oregon border forced the evacuation Monday of dozens of residents and campers.

In Oregon, where tens of thousands of people have been displaced by evacuations, authorities in some areas were asking residents on Tuesday to stay away from destroyed neighbourhoods because of lingering dangers, including falling trees and rock slides along Highway 22 in Marion County.

Oregon has reported eight deaths, a number lowered from 10 after two sets of remains were identified as animals. The Oregon State Police mobilised a mobile morgue in Linn County, between Salem and Eugene, that could handle remains from wildfires across the state. Specialists were being assembled, such as those with dental expertise, to help identify the dead.