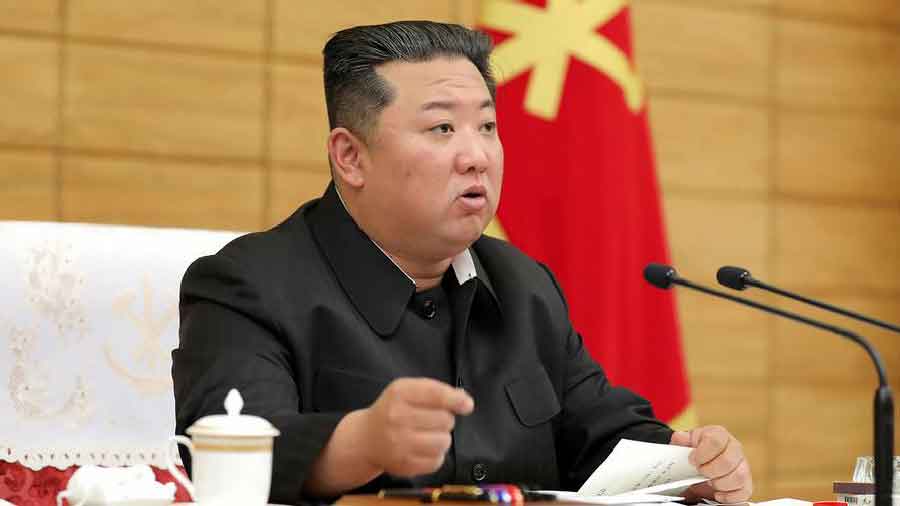 Kim Jong Un has maintained his country will be able to tackle the crisis on its own
Deutsche Welle
Deutsche Welle   |   Published 19.05.22, 04:52 PM

North Korea reported more than 200,000 new illnesses on Thursday, bringing the total number of suspected cases to 1.98 million. Pyongyang has also not responded to offers of help from the WHO and other countries.

The North Korean news outlet reported 262,270 more people with fever symptoms on Wednesday and the death of a person on Wednesday evening.

However, it did not report the numbers of those who tested positive for COVID.

This brings the North's suspected COVID tally closer to 2 million, as the total number of cases currently stands at 1.98 million. At least 63 people have died of illness so far according to state figures.

Concerns over lack of tests and vaccines

North Korea officially reported an outbreak of COVID last week and attributed one of the deaths to the omicron variant of the virus.

Health experts say the North does not have enough tests to confirm the number of people infected by the virus.

The North has also not responded to offers of aid from the World Health Organization (WHO) and other countries.

On Tuesday, World Health Organization Director General Tedros Adhanom Ghebreyesus said the North had not responded to its request for more data about the outbreak.

Tedros added that North Korea and Eritrea were the only sovereign UN member countries without a vaccination program and neither had responded to the WHO's offer for vaccines, medicines and tests.

Seoul's deputy national security adviser said on Wednesday that South Korea and the United States had offered to send help, including aid, but there has been no response from Pyongyang.

KCNA reported on Thursday that health authorities were also increasing the production of traditional Korean medicines used to reduce fever and pain since they were "effective in prevention and cure of the malicious disease."

The news outlet said that factories had ramped up production of injections, medicines, sterilizers and thermometers in a "lightning way" as more isolation wards were installed around the country.

Kim Jong Un had blasted health officials earlier this week for their "immature" response to the pandemic and slow delivery of medicines.

State media has also reported that government has encouraged people to use painkillers and resort to unverified home remedies — like gargling salt water or drinking willow leaf tea — to cure themselves.

The North also said earlier this week that a million people had recovered from illness.

In spite of a strict lockdown, state media reported that economic activity went on with large groups of people gathering at power facilities and construction sites.

US President Joe Biden is set to meet South Korea's new leader this weekend, and they're expected to address the North's nuclear program as well as the COVID outbreak in the country, The Associated Press new agency reported.