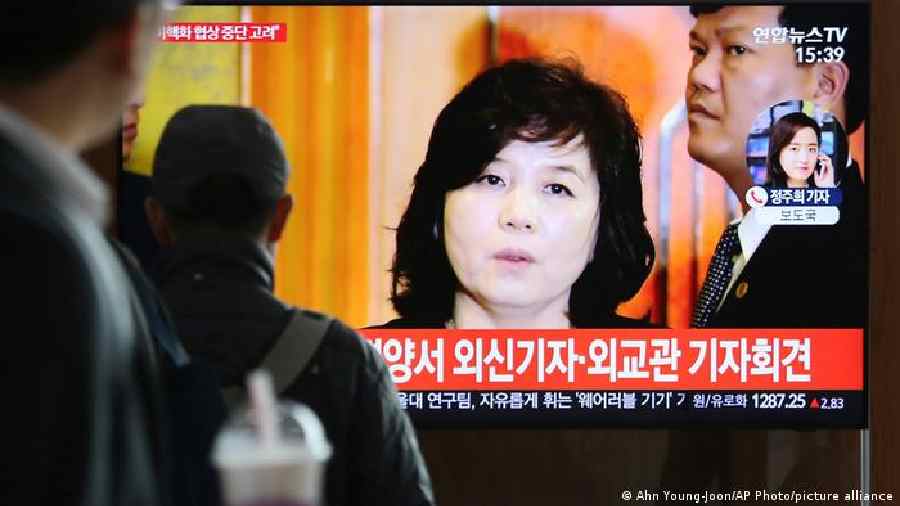 Career diplomat Choe Son Hui will represent North Korea on the international stage as Pyongyang pushes ahead with a series of sanctions-busting weapons tests and ignores US calls for talks.

Her appointment comes as Pyongyang ramps up its weapons testing program. North Korea's state news agency KCNA reported her appointment on Saturday, shortly after the conclusion of a three-day Workers' Party's Central Committee in Pyongyang on Friday.

The talks have stalled, with North Korea ignoring repeated offers from the US to return to negotiations.

Instead, Kim Jong Un doubled down on his arms buildup in the face of what he described as an aggravating security climate.

"[Kim] said the right to self-defense is an issue of defending sovereignty, clarifying once again the party's invariable fighting principle of power for power and head-on contest,'' state-run outlet KCNA said.

Without giving details, it said that Kim said his armed forces and military scientists would pursue further "militant tasks." He did not mention nuclear weapons or South Korea directly.

"The conduct of a nuclear test would contravene UN Security Council resolutions and would be a cause for serious concern," IAEA general director Rafael Grossi said.

US and South Korea ready 'deterrence'

US Defense Secretary Lloyd Austin and his South Korean counterpart, Lee Jong-sup, on Saturday condemned the North's ongoing military activities, after an unprecedented number of ballistic missile tests this year.

Meeting on the sidelines of the Shangri-La Dialogue security summit, Austin and Lee "agreed to expand the scope and scale of South Korea-US combined exercises as agreed at the two countries' summit in order to maintain steadfast deterrence and constant readiness," South Korea's Defense Ministry said in a statement.

"Secretary Austin underscored that the US commitment to the defense of [South Korea] is ironclad and underpinned by the full range of US capabilities, including nuclear," the US Defense Department said in a statement.