Working independently, the three laureates did experiments that helped clarify a fundamental claim about quantum entanglement 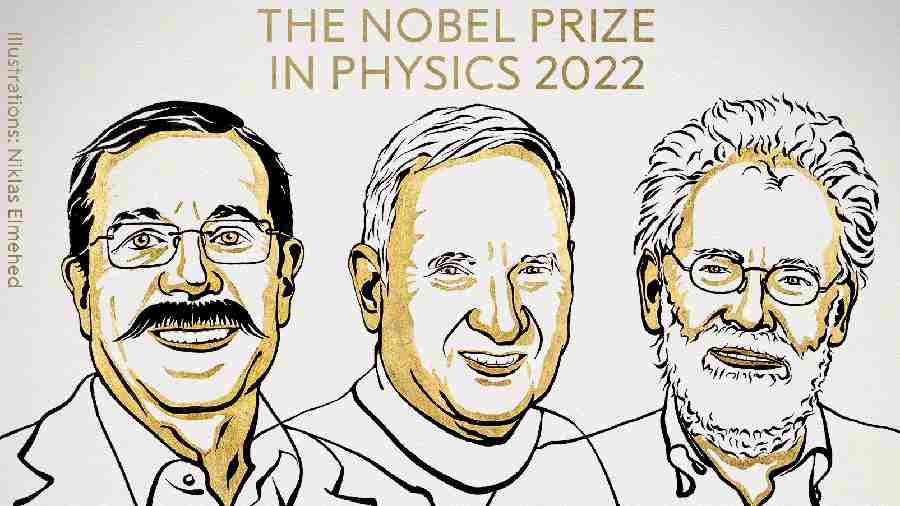 The Nobel Prize in Physics was awarded to Alain Aspect, John F. Clauser and Anton Zeilinger on Tuesday for work that has “laid the foundation for a new era of quantum technology”, the Nobel Committee for Physics said.

The scientists have each conducted “groundbreaking experiments using entangled quantum states, where two particles behave like a single unit even when they are separated”, the committee said in a briefing. Their results, it said, cleared the way for “new technology based upon quantum information”.

The laureates’ research builds on the work of John Stewart Bell, a physicist who strove in the 1960s to understand whether particles, having flown too far apart for there to be normal communication between them, can still function in concert, also known as quantum entanglement.

According to quantum mechanics, particles can exist simultaneously in two or more places. They do not take on formal properties until they are measured or observed in some way. By taking measurements of one particle, like its position or “spin”, a change is observed in its partner, no matter how far away it has travelled from its pair.

Working independently, the three laureates did experiments that helped clarify a fundamental claim about quantum entanglement, which concerns the behaviour of tiny particles, like electrons, that interacted in the past and then moved apart.

Using duct tape and spare parts at Lawrence Berkeley National Laboratory in Berkeley, California, he endeavoured to measure quantum entanglement by firing thousands of photons in opposite directions to investigate a property known as polarisation. When he measured the polarisations of photon pairs, they showed a correlation, proving that a principle called Bell’s inequality had been violated and that the photon pairs were entangled, or acting in concert.

The research was taken up 10 years later by Dr Aspect, a French scientist, and his team at the University of Paris.

And in 1998, Dr Zeilinger, an Austrian physicist, led another experiment that considered entanglement amongthree or more particles.

Eva Olsson, a member of the Nobel Committee for physics, noted that quantum information science had broad implications in areas like secure information transfer and quantum computing.

Quantum information science is a “vibrant and rapidly developing field,” she said. “Its predictions have opened doors to another world, and it has also shaken the very foundation of how we interpret measurements.”

The Nobel committee said the three scientists were being honoured for their experiments with entangled photons, establishing the violation of Bell inequalities and pioneering quantum information science.

“Being able to manipulate and manage quantum states in all their layers of properties gives us access to tools with unexpected potential,” the committee said in a statement on Twitter.

Dr Zeilinger described the award as “an encouragement to young people”.

“The prize would not be possible without more than100 young people who worked with me over the years and made all this possible,” he said.

Though he acknowledged that the award was recognising the future applications of his work, he said, “My advice would be: Do what you find interesting, and don’t care too much about possible applications.”

It was the second of several such prizes to be awarded over the coming week.