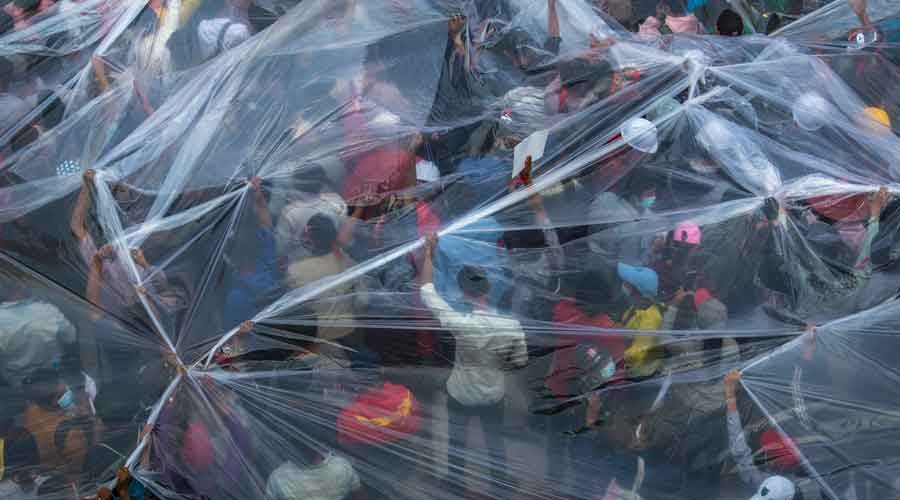 Demonstrators use plastic sheets to protect themselves in case the security forces fired water cannons in Yangon
NYTNS
Reuters   |   Bangkok   |   Published 10.02.21, 12:34 AM

Police and protesters clashed in Myanmar on Tuesday, with injuries on both sides on the most violent day so far of demonstrations against the military coup that overthrew Aung San Suu Kyi, and a doctor said one woman was unlikely to survive a gun wound in the head.

Three other people were being treated for wounds from suspected rubber bullets after police fired guns, mostly into the air, and used water cannon to try to clear protesters in the capital Naypyitaw.

State television reported injuries to police during their attempts to disperse protesters — its first acknowledgement of the demonstrations taking place in the country.

The incidents marked the first bloodshed since the military led by army chief Senior General Min Aung Hlaing overthrew Suu Kyi’s newly elected government on February 1 and detained her and other politicians from her National League for Democracy (NLD).

The military claimed that the NLD won by fraud — an accusation dismissed by the election committee and western governments.

Late on Tuesday, police in Myanmar raided the NLD’s headquarters in Yangon, two elected NLD lawmakers said.  The raid was carried out by about a dozen police personnel, who forced their way into the building in the commercial capital after dark, they said.

The protests are the largest in Myanmar for more than a decade, reviving memories of almost half a century of direct army rule and spasms of bloody uprisings until the military began a process of withdrawing from civilian politics in 2011.

According to reports from Naypyitaw, Mandalay and other cities, numerous demonstrators have been injured, some of them seriously, by security forces.

A doctor in the Naypyitaw hospital said the shot woman had suffered what was most likely to be a fatal head wound.

“She hasn’t passed away yet, she’s in the emergency unit, but it’s 100% certain the injury is fatal,” said the doctor, who declined to be identified. “According to the X-ray, it’s a live bullet.”

Neither police nor the hospital responded to a request for comment.

A man had a chest wound but was not in critical condition. It was not clear if he was hit with a bullet or rubber bullet, the doctor said.

State-run MRTV news said a police truck had been destroyed at a demonstration in Mandalay, Myanmar’s second biggest city. It showed footage of the aftermath, including injured police.

MRTV described the protests as being orchestrated by people who wanted to harm the nation’s stability and had acted aggressively. It made no mention of the coup or other demonstrations across the country.

Earlier, witnesses said police fired into the air in Naypyitaw as a crowd refused to disperse. They then blasted them with water cannon while the protesters responded with stones, a witness said.

Footage posted on social media apparently of the woman who was shot showed her with other protesters by what appeared to be a bus-stop shelter some distance from a row of riot police as a water cannon sprayed and several shots could be heard.

The woman, wearing a motorbike helmet, suddenly collapsed. Pictures of her helmet showed what appeared to be a bullet hole.

Video from the central town of Bago showed police confronting a crowd and firing water cannon. Police arrested at least 27 demonstrators in Mandalay, domestic media reported. The situation nationwide was quiet by nightfall. Orders banning gatherings of more than four people and a curfew from 8pm to 4pm have been imposed on Yangon and Mandalay.