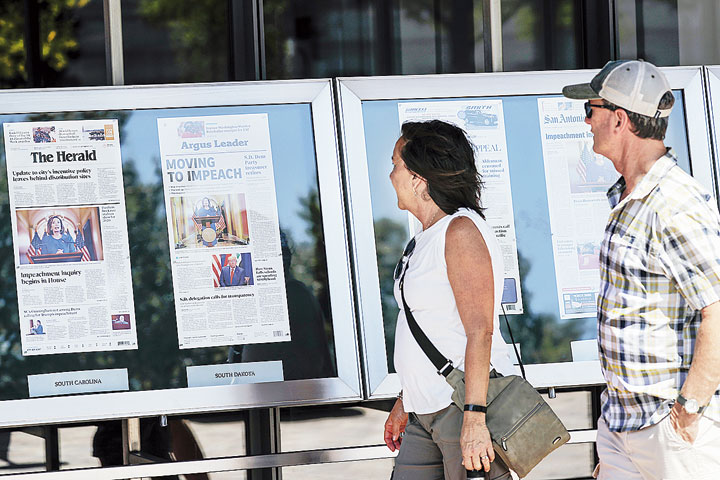 A mile along Pennsylvania Avenue from the White House stands a giant monument to the US Constitution’s defence of freedom of speech and the press.

The stone tablet several storeys high bearing the words of the First Amendment graces the front of the Newseum, a museum devoted to the gathering and publishing of news that has stood here since 2008.

In recent years it has assumed a greater symbolic importance as a riposte to fake news and to President’s Trump’s attacks on the media as the “enemy of the people”. Much like the newspapers that the museum celebrates, however, the Newseum has fallen on hard times.

Just before “national newspaper week” last week it announced that it would be closing at the end of the year. The decision felt like another sign of the collapse of traditional media. One in five local American newspapers has closed since 2004. In the same week, the Biddeford Journal Tribune, a daily in Maine founded in 1884, stopped the presses.

The Newseum is privately funded, largely by a foundation set up from the profits of Gannett, the publisher of USA Today, along with other donations, including one of $10 million from News Corporation, owner of The Times.

The seven-floor museum charges a hefty $24.95 entrance fee, in contrast to most of the capital’s museums, which are free.

Parallels to the way that freely available online news sources have eroded paid-for papers are all too apparent.

As if this were not symbolic enough of the shake-up in the news industry, the First Amendment tablet is to be removed from the facade of the building when it transfers to its new owner, Johns Hopkins University.

Many of the exhibits are also to be mothballed, including the centrepiece of its upper floor: the broadcast antenna from the top of the World Trade Center, pulled out of the ashes after 9/11.

Along with sections of the Berlin Wall and every Pulitzer prize-winning photograph, there are mundane items that tell stories of courage and endeavour.

One of these is the damaged Datsun 710 car owned by Don Bolles, a reporter for TheArizona Republic. He arranged to meet a source in a Phoenix hotel for a story about the mafia in June 1976. After waiting in the lobby he returned to his car. He was killed by a bomb planted under the driver’s side.

His death spurred 38 journalists from 23 newspapers to continue his investigation, eventually publishing the Arizona Project on organised crime in the state.

“We are looking for new and innovative ways of doing our work... there are great opportunities of reaching wider audiences using different platforms,” said Sonya Gavankar, director of public relations at the Newseum, sounding like a newspaper executive explaining the transition to digital.

Not everyone is sorry to see the closure, however.

In a reminder that Americans guard their rights in different ways, the Washington Free Beacon, a conservative website, wrote that “a self-congratulatory monument to the media in our nation’s capital will close... proving once again that President Trump cannot stop winning and will never stop owning the libs”.

Last August, the Newseum faced fierce criticism from journalists after it was discovered that T-shirts reading “You Are Very Fake News” were being sold in the gift shop. The museum apologised and pulled the merchandise.