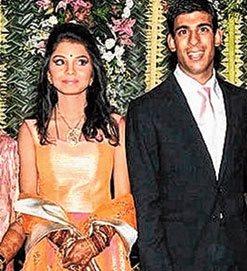 London, Oct. 19: To compare Rishi Sunak’s selection yesterday as the prospective Tory parliamentary candidate for Richmond in Yorkshire, think back to 1992 when 18-year-old Sachin Tendulkar became the first overseas cricketer to play for the county.

That a constituency as deeply conservative as Richmond should pick Rishi is nothing short of radical, indeed sensational.

“I’m over the moon,” confessed Rishi, who last hit the headlines back in August 2009 when he married Akshata Murthy, daughter of Infosys founder N.R. Narayana Murthy, at a relatively simple but elegant and high profile wedding in Bangalore.

Yesterday’s development is, if anything, even bigger news.

Yorkshire, which is England’s biggest county, counts Freddie Trueman and Geoffrey Boycott as sons of the soil. It famously does not take to foreigners — usually. But the times are changing.

The vacancy in Richmond was caused by the decision of the sitting MP, William Hague, to stand down as foreign secretary at the time of David Cameron’s last cabinet reshuffle in July.

Hague, who has represented Richmond for 26 years, is leaving politics altogether at the general election in May next year.

Some 90 hopefuls from the Conservative Party’s vetted list of candidates applied for the seat. Their number was whittled down to 14 and then, after interviews, to the final shortlist of four.

Rishi was up against some very senior figures in the local party.

They included Wendy Morton, former chairman of the Richmond Conservative Association and a Richmondshire district councillor; councillor Robert Light, leader of the Conservative group on Kirklees Council in West Yorkshire and former council leader; and Chris Brannigan, a former lieutenant colonel in the Royal Scots Dragoon Guards, with whom he has served on 11 operational tours.

And yet, remarkably, Rishi sailed through on the first round, getting more than 50 per cent of votes cast by 200 local party members.

All four had to make their pitch for half an hour and then subject themselves to questions from the Tory faithful.

In a way, Rishi himself could out-English the English. He was head boy at Winchester, one of Britain’s leading public schools where the Nawab of Pataudi had been a pupil and captain of cricket in the 1950s. He was an undergraduate at Lincoln College, Oxford, and took a First in PPE (Philosophy, Politics and Economics) before going to Stanford to do an MBA as a Fulbright scholar.

As a businessman, he co-founded a multinational investment firm. He now invests in small and fast-growing British businesses. He is also is a governor of the East London Science School.

In his speech to party members yesterday, Rishi told The Telegraph that “I spoke about my family background — my mum ran a local chemist and my dad is a GP. I grew up being inspired by the contribution they made to our community — something I would like to emulate as an MP.”

“I also spoke about my good luck in having a great education — a priority and sacrifice for my parents. As a result, I spend a lot of time working with schools and educational programmes to help broaden educational opportunities for all kids.”

As an aside, Rishi enthused: “I am a great admirer of Tiger Pataudi.”

Hague gave his blessing to the young candidate: “I have been hearing many people saying how impressive Rishi is, and how well he has been getting to know the area and its issues. I look forward to campaigning for him.”